Holding the Fort: reporting from the Venezuelan Embassy in Washington 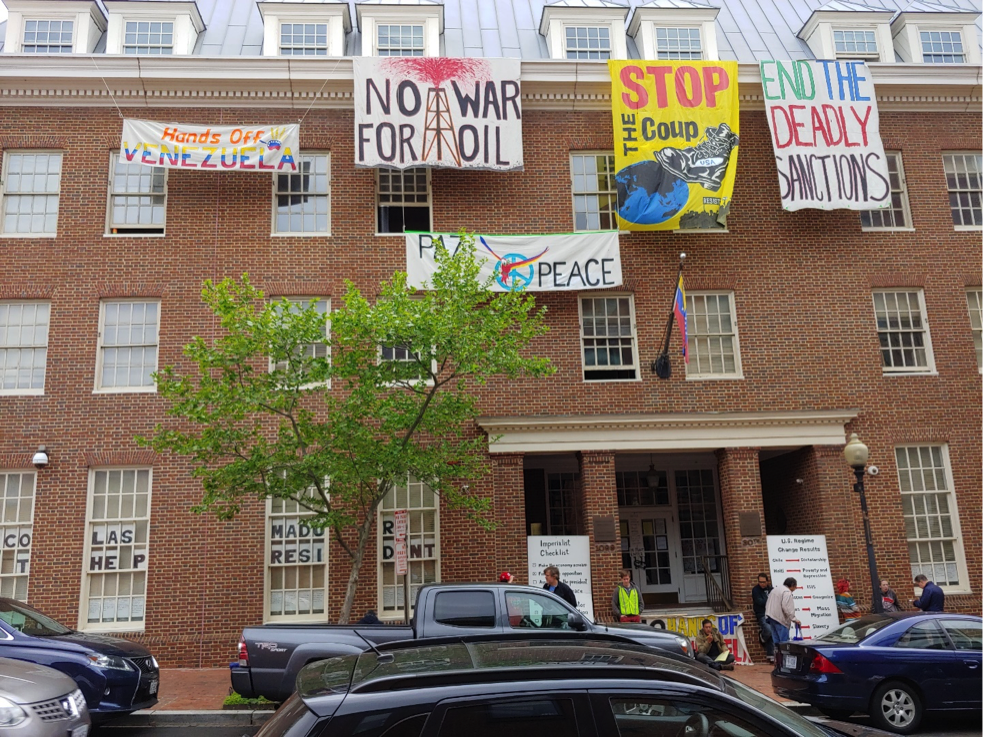 The signs hanging from the Venezuelan Embassy summarize our opposition to US foreign policy in Venezuela. We call for peace. We say, “Hands off Venezuela. No war for oil. Stop the coup and end the deadly sanctions.”

There’s a desk in an office here that is covered with several hundred unanswered letters that call out the Maduro government for human rights abuses and demand better treatment of all political prisoners, especially those who are nonviolent. Meanwhile, the American corporate media reports that those who occupy the embassy as guests of the Venezuelan government are fervent Maduro supporters.

I certainly am not.

Until May 1, we could come and go as we pleased. Now, we can only leave; no one can enter. That earlier freedom provided me the opportunity to engage in a lengthy dialogue with two Venezuelan supporters of U.S. – backed Juan Guaido. They were initially hostile to me, but their animosity calmed after fifteen or twenty minutes of rational discussion.

They said they were opposed to Maduro, whom they called a ruthless dictator. They called me an accomplice to murder and an unwitting dupe. One said an acquaintance’s son, who was nonviolent, and “always on Facebook,” was shot by police, execution style. The other said people can wind up in jail for months and be tortured for simply raising a sign that challenges Maduro. I listened, knowing they were probably telling the truth, although my allegiance to the collective was not shaken.

It’s a tough pill to swallow for a pacifist like me, but I’m not prepared to sit on the sidelines. The U.S. government is plotting another war and I want to stop them. I know what the leading human rights organizations in the world are saying about the Maduro regime.

Amnesty International says Maduro uses “hunger, punishment and fear,” as a formula for repression. They say security forces under President Maduro’s command “have executed and used excessive force against people, and arbitrarily detained hundreds of others, including teenagers, in an escalation of their policy of repression as a means of controlling the people of Venezuela.” Amnesty says that several who had criticized Maduro on social media posts that had gone viral were executed.

The United Nations Office of the High Commissioner for Human Rights, OHCHR, reported that impunity for human rights abuses in Venezuela was “pervasive.” The UN office says it is deeply concerned about “the shrinking of the democratic space, especially the continued criminalization of peaceful protest and dissent.” OHCHR has also documented “numerous human rights violations and abuses by security forces and pro-government armed groups (colectivos armados), including excessive use of force, killings, arbitrary detentions, torture and ill-treatment in detention, and threats and intimidation.”

If he’s such a bad guy, you may ask, why am I defending his embassy? The short answer is that Maduro, compared to a US – engineered coup, is the lesser of two evils. We must hold the fort while advocating for internationally-sponsored dialogue to nonviolently settle the conflict between the two factions.

“We must hold the fort while advocating for internationally-sponsored dialogue to nonviolently settle the conflict between the two factions.”

The US has learned the tricks of the trade from its regime change ventures in Iraq, Syria, Libya, and its long, violent history of sponsoring regime change in Latin America. An open letter —signed by Noam Chomsky and 70 prominent scholars and activists was issued on January 24, 2019 in opposition to ongoing intervention by the United States in Venezuela. The letter captures my rationale for moving into the embassy. They wrote, “If the Trump administration and its allies continue to pursue their reckless course in Venezuela, the most likely result will be bloodshed, chaos, and instability. Neither side in Venezuela can simply vanquish the other. The military, for example, has at least 235,000 frontline members, and there are at least 1.6 million in militias. Many of these people will fight, not only on the basis of a belief in national sovereignty that is widely held in Latin America ― in the face of what increasingly appears to be a US-led intervention ― but also to protect themselves from likely repression if the opposition topples the government by force.”

The human rights record of the Maduro government is abysmal, but the resulting human suffering pales in comparison to the likely outcome of another successful coup d’etat orchestrated by the U.S.

We could begin to nonviolently solve problems in Venezuela and around the world if the U.S. would abide by international law, starting with the Vienna Convention on Diplomatic Relations, 1961 The US is violating that treaty by allowing criminal elements to destroy property and brutalize people at the Venezuelan Embassy in Washington.

Today, the U.S. is one of the countries to have ratified the fewest number of international human rights treaties. Here’s a list of treaties the U.S. has refused to ratify:

It’s time for a massive paradigm shift in this country. The United States of America doesn’t play by the rules.