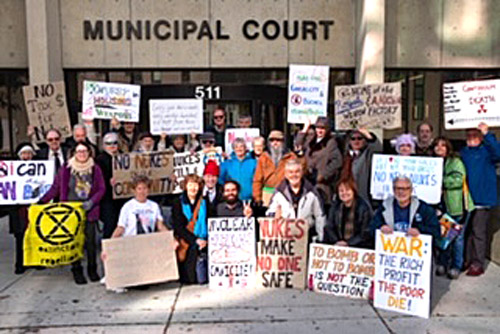 On Nov. 1, in the Kansas City, Mo., Municipal Court, 15 peace activists, in an act of nonviolent civil resistance, were found guilty of trespassing at the National Security Campus in Kansas City, Mo. The NSC plant, located at 14520 Botts Road, is where 85 percent of the non-nuclear parts are manufactured or procured for the U.S. nuclear arsenal.

The peace activists, following their deep belief that nuclear weapons are illegal, immoral, and threaten all life, crossed the “property line” at the plant after a PeaceWorks-KC rally. The line-crossers were arrested on Memorial Day, May 27, to heighten awareness to the dangers of nuclear weapons. Some 90 persons gathered for the rally.

Before their Nov. 1 trial, the defendants submitted to their lawyer their own personal, powerful statement as to why they chose to engage in the nonviolent civil disobedience act of trespass. These statements are a window into the souls of people who lead with their hearts and reach out to people in need. Here is a sampling of what some of the defendants wrote.

There are millions of poor people in the U.S. who lack basic resources, and the poor are living an inhumane existence. … Imagine what could be done to alleviate the social needs of the poor if the equivalent amount of money were diverted away from nuclear weapons.

– Christian Brother Louis Rodemann, called to advocate on behalf of, and live with, the poor.

Our nation considers nuclear weapons legal, but does that mean they are moral, ethical, or right? How can an omnicidal weapon that can destroy life as we know it on Earth be moral? How can squandering billions on nuclear weapons when billions of people are deprived of life’s necessities be ethical? And how can indiscriminately threatening entire civilian populations with mass extinction be right?

I have been a pediatric nurse in Kansas City for 45 years. … I have learned that radiation disproportionately affects women, fetuses, babies, and children. I have talked with people all over the country who have been made ill or had family members die due to nuclear weapons production and testing. There is no safe level of exposure to radiation, yet the U.S. exploded about 1,000 nuclear weapons in the near past. That radiation lasts thousands of generations. The Kansas City Plant has also disclosed it used about 2,400 toxic chemicals, which also cause cancer and other deaths.

This action was not taken lightly on my part and is a response to over 10 years of prayer and discernment. In addition, I do not believe that—in “crossing the line” with the intent of shutting down the production of nuclear weapon parts—I was in violation of any “legitimate law.” I believe that I was acting in accordance with my Catholic faith and for the expressed purpose of protecting the common good of all humans.

And so here we are to determine if I and those with me are guilty for taking a stand against the building of the most destructive weapons in all of human history. I say we are not.

All the defendants said they were grateful for the work of their lawyer, Henry Stoever, also the chairperson of the PeaceWorks-KC Board of Directors. They commented that Henry put his heart, soul, and loads of time into preparing a well-honed, organized case. Henry was in touch with the court prior to trial, pleading the case that each defendant should be allowed to speak at trial. Judge Martina Peterson agreed to allow each defendant time to speak, taking over four hours—an impressive set of testimony for peace. The defendants suggested that Henry’s belief in their mission convinced Judge Peterson to allow their testimony in the first place!

Peace Activists Who Crossed the Line:

At the trial Nov. 1 and the sentencing Nov. 8, Judge Peterson made clear that she understood the viewpoint of the activists, who intended no harm to any person or property. She said she admired their commitment to a higher purpose but was required to follow the law. So she pronounced the 15 line-crossers guilty of trespassing. She gave a Suspended Imposition of Sentence, which means that the defendants will not have a conviction on their record, provided they meet all the terms of the probation.

All 15 defendants from the Kansas City metro area were placed on one year’s probation, each being charged $168.50. All the defendants are required to stay away from the plant (not go within a 2-mile radius of the plant) for one year.

Also, the defendants will be required to do community service—first offense, 10 hours; second offense, 20 hours; and third offense, 50 hours. Three of the defendants have had three or more offenses: Jim Hannah, Georgia Walker, and Louis Rodemann.

The two line-crossers from the Netherlands and Germany did not attend the trial. Therefore, the judge issued a warrant for their arrest.

Various supporters at the trial and sentencing expressed overwhelming thanks to all the defendants. The supporters said they were grateful for the line-crossers’ sacrifice and dedication to peace, the common good, and a safer world for all people everywhere.

Mary Hladky serves as vice chair of the PeaceWorks-KC Board of Directors.