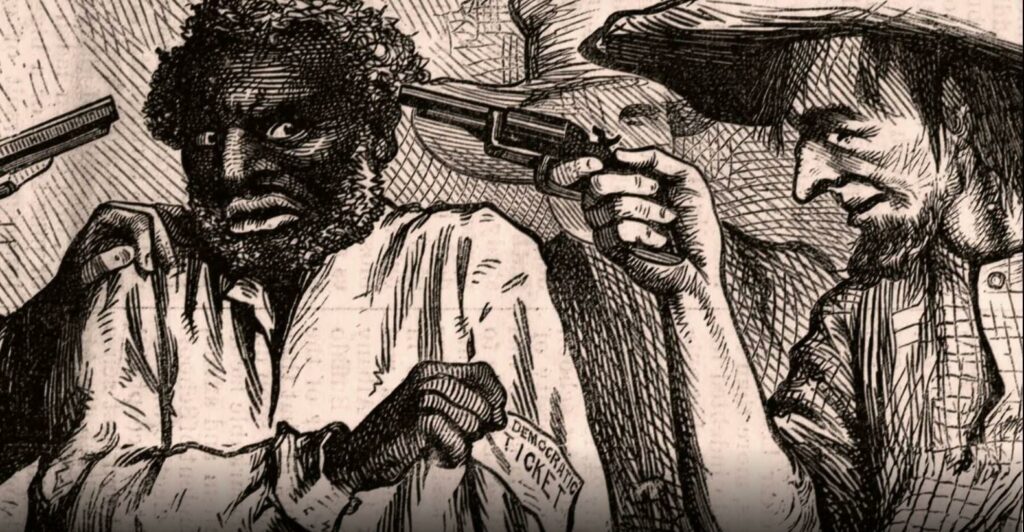 Albion Winegar Tourgée may be best known now, though not in his lifetime, as the lead attorney in the Plessy v. Ferguson case, which was a set-up, a staged incident, with the cooperation even of the railroad company, to get a man arrested for sitting in the wrong car, take the matter to court, and end segregation on trains — except that it backfired horribly and legalized apartheid for over 50 years.

Tourgée’s work was not one incident alone, and his positive influence hasn’t ceased. His was one of the most influential white voices for equal rights for blacks in the decades following the U.S. Civil War. I want to quote and consider a short section found in one of his novels, A Fools Errand. The book was a runaway bestseller in 1879, published anonymously “by one of the fools.”

The book semi-autobiographically recounted the author’s endeavor to relocate himself and his family from the North to Greensboro, North Carolina, following the war, in order to assist in reconstruction. The book recounts the horrors of Ku Klux Klan terrorism against blacks and against whites advocating for rights for blacks. While the passage I’m about to quote generalizes, the book does not. It provides the perspectives of whites and blacks from the South and the North, including Southern Unionists and racist Northerners.

The generalization is worth paying attention to — and all the more so, because it describes the years immediately after the Civil War, which in a top-down simplified history found in text books, was the period of positive change when blacks voted and were elected, and which preceded the backlash of heightened racism and lynchings. In Tourgée’s account, the racism that followed was, at least in the South, already there, along with the lynchings, and change would only come through education. Tourgée pauses in the narrative of his book to explain the failure of the North and South to even understand each other:

“Slavery is wrong morally, politically, and economically. It is tolerated only for the sake of peace and quiet. The negro is a man, and has equal inherent rights with the white race.”

“The negro is fit only for slavery. It is sanctioned by the Bible, and it must be right; or, if not exactly right, is unavoidable, now that the race is among us. We can not live with them in any other condition.”

“Northern Idea of the Southern Idea.

“Those Southern fellows know that slavery is wrong, and incompatible with the theory of our government; but it is a good thing for them. They grow fat and rich, and have a good time, on account of it; and no one can blame them for not wanting to give it up.”

“Southern Idea of the Northern Idea.

“Those Yankees are jealous because we make slavery profitable, raising cotton and tobacco, and want to deprive us of our slaves from envy. They don’t believe a word of what they say about its being wrong, except a few fanatics. The rest are all hypocrites.”

“The Northern Idea of the Situation.

“The negroes are free now, and must have a fair chance to make themselves something. What is claimed about their inferiority may be true. It is not likely to approve itself; but, true or false, they have a right to equality before the law. That is what the war meant, and this must be secured to them. The rest they must get as they can, or do without, as they choose.”

“The Southern Idea of the Situation.

“We have lost our slaves, our bank stock, every thing, by the war. We have been beaten, and have honestly surrendered: slavery is gone, of course. The slave is now free, but he is not white. We have no ill will towards the colored man as such and in his place; but he is not our equal, can not be made our equal, and we will not be ruled by him, or admit him as a co-ordinate with the white race in power. We have no objection to his voting, so long as he votes as his old master, or the man for whom he labors, advises him; but, when he chooses to vote differently, he must take the consequences.”

“The Northern Idea of the Southern Idea.

“Now that the negro is a voter, the Southern people will have to treat him well, because they will need his vote. The negro will remain true to the government and party which gave him liberty, and in order to secure its preservation. Enough of the Southern whites will go with them, for the sake of office and power, to enable them to retain permanent control of those states for an indefinite period. The negroes will go to work, and things will gradually adjust themselves. The South has no right to complain. They would have the negroes as slaves, kept the country in constant turmoil for the sake of them, brought on the war because we would not catch their runaways, killed a million men; and now they can not complain if the very weapon by which they held power is turned against them, and is made the means of righting the wrongs which they have themselves created. It may be hard; but they will learn to do better hereafter.”

“The Southern Idea of the Northern Idea.

“The negro is made a voter simply to degrade and disgrace the white people of the South. The North cares nothing about the negro as a man, but only enfranchises him in order to humiliate and enfeeble us. Of course, it makes no difference to the people of the North whether he is a voter or not. There are so few colored men there, that there is no fear of one of them being elected to office, going to the Legislature, or sitting on the bench. The whole purpose of the measure is to insult and degrade. But only wait until the States are restored and the “Blue Coats” are out of the way, and we will show them their mistake.”

Now, it may seem obvious to us that this is a conversation between white men about black men, as if women do not exist — as well as that not all white men held exactly the same viewpoints. But the point is that it’s not a conversation at all. Neither side can hear the other. Each takes the other to be lying, because actually believing what is claimed can simply not be imagined. A takes B to view the world more or less as A does, not bothering to attempt to see the world as B claims to.

Tourgée was well aware that not all thought is conscious, that people can be self-deceived. But, whether beliefs are convenient or not, they can in fact be believed in. He was suggesting that we take seriously what other people believe. This is something we might do a bit more of today. If someone says that they believe racism in the United States is largely generated by Russian posts on social media, they may or may not know anything about U.S. history, they may or may not be a big supporter of Hillary Clinton, they may or may not know anything about Hillary Clinton’s history; the point is that they may truly believe what they say they do. The same goes for someone who says they’re terrified of ISIS taking over their local government in Kansas, but professes no fear or even anxiety about nuclear weapons or environmental destruction. Or someone who tells you that billionaires are on the side of poor people against the elites. A solution to such beliefs will not be found by dismissing them as unreal or theorizing that they will be worn away by democratic or market forces.

Imagining that others think what they say they think could be a huge boost to U.S. foreign policy. For example:

If North Korea would stop building weapons and threatening, and bow to our will, then we would be able to bestow upon it all the benefits of our civilization, putting an end to the hunger and suffering created by their backward, ignorant, and stubborn ways.

The U.S. Idea of the North Korean Idea

This arrogance is based in madness. A tiny rogue nation must meet the basic standards of all other nations except the Global Policeman, whose job it is to compel them to do so. Criminals always blame their aggression on the police, but they know better and are simply making a case to delude their people.

The North Korean Idea of the U.S. Idea

We have stopped building weapons and threatening, whenever the United States has done the same. The reason we cannot do so unilaterally is that the United States once absolutely destroyed our nation, leveled it, bombed it flat, killing millions. We cannot be asked to risk that again, and the U.S. would not be asking us to risk that again if it didn’t want to do it again.

Iran refuses to work with us. Israel and Saudi Arabia say it must be bombed. It clearly cannot be reasoned with. The lunatics took our people captive in an embassy for no reason. They’re building nuclear energy facilities for no reason. We have tried everything short of war to give the Iranian people a better government, and they’ve refused.

The U.S. embassy overthrew our government in 1953. Who’s ever heard of having a revolution without clamping down on the U.S. embassy? We’re not suicidal — which is also why we’ve not threatened or started any wars in centuries. But the U.S. sends us sanctions and assassins and saboteurs, lies and inspectors — and threats from the neighboring countries which the U.S. has already destroyed. We agree to absurd agreements, and then the U.S. backs out of them; are we Native Americans? Is that why they keep promising to obliterate us?

The U.S. Idea of the Iranian Idea

What is with this irrational obsession with ancient history that backward people exhibit? The United States gave Iran a benevolent and progressive leader. His son is ready and waiting. The people of Iran are not as ungrateful as the fanatical regime ruling over them. We’ll be welcomed as liberators within hours when we finally find the nerve to bomb them.

The Iranian Idea of the U.S. Idea