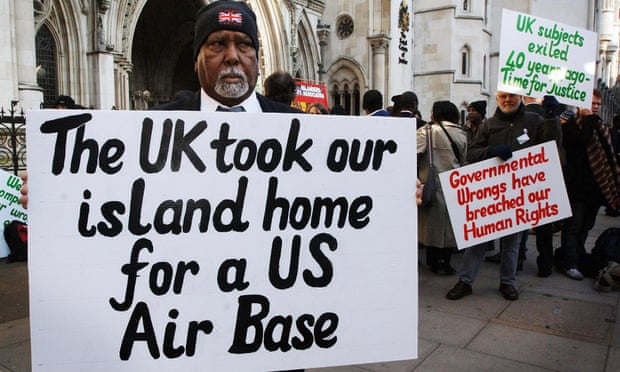 We are a group of scholars, military and international relations analysts, and other experts who are writing in support of the exiled Chagossian people. As you know, the Chagossians have been struggling for more than 50 years to return to their homeland in the Indian Ocean’s Chagos Archipelago since the UK and US governments expelled the people between 1968 and 1973 during construction of the US/UK military base on the Chagossians’ island Diego Garcia.

We support the Chagos Refugees Group’s call to “condemn the illegal occupation of [the] Chagos Archipelago by the British government” following the United Nations General Assembly Resolution adopted 22 May 2019 by a 116–6 vote.

We support Chagossians today protesting the end of the six-month deadline by which the UN ordered the United Kingdom 1) to “withdraw its colonial administration” from the Chagos Archipelago, 2) to acknowledge that the Chagos Archipelago “forms an integral part” of the former UK colony Mauritius; and 3) “to cooperate with Mauritius in facilitating the resettlement” of Chagossians.

We note the Chagos Refugees Group is not asking to close the base. They simply want the right to return home to live in peaceful coexistence with the base, where some want to work. The Mauritian government has said it will allow the US/UK base to continue to operate. Civilians live next to US bases worldwide; military experts agree resettlement would pose no security risk.

We support the Chagos Refugees Group in saying the UK and US governments cannot continue “to banish [Chagossians’] fundamental right” to live in their homeland. You have the power to rectify this historic injustice. You have the power to show the world that the UK and US uphold basic human rights. We agree with Chagossians “that justice needs to be done” and that “it’s time to put an end to [their] suffering.”

Richard Dunne, Barrister/Author, “A Dispossessed People: The Depopulation of the Chagos Archipelago 1965-1973”

John Lindsay-Poland, Author, Plan Colombia: U.S. Ally Atrocities and Community Activism and Emperors in the Jungle: The Hidden History of the U.S. in Panama

Catherine Lutz, Professor, Brown University/Author, Homefront: A Military City and the American Twentieth Century and War and Health: The Medical Consequences of the Wars in Iraq and Afghanistan

Delbert L. Spurlock. Jr., Former General Counsel and Assistant Secretary of the US Army for Manpower and Reserve Affairs

David Vine, Professor, American University/Author, Island of Shame: The Secret History of the U.S. Military Base on Diego Garcia