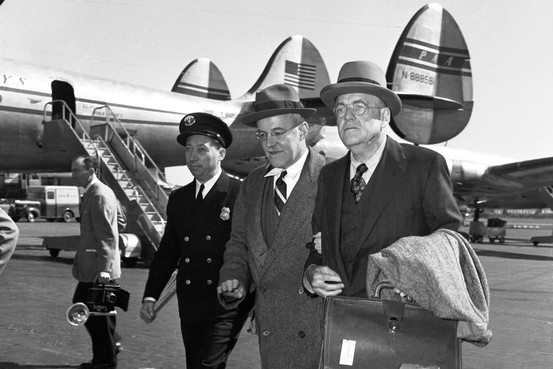 If you were Iranian and learned that U.S. National Security Adviser John Bolton wanted to attack your country, wouldn’t you feel terrified?

But we’re taught to dismiss that.

The training begins early:  Complete the assignment. Get good grades.  Insulate your life. Automate your soul.

In 1953, the Eisenhower administration, with the Rockefeller Foundation’s former chair, Secretary of State John Foster Dulles, and CIA Director Allen Dulles, engineered a coup that replaced Iran’s Mohammad Mossadegh with the Shah, who reigned over more than two decades of poverty, torture, and oppression.  In violation of Iran’s sovereignty and neutrality, the Allies previously had invaded Iran during both World Wars for oil and railroads.

In 1964, a Johnson-engineered coup replaced Brazil’s João Goulart, later killed, with a military dictatorship that took over labor unions, brutalized priests, and perpetrated widespread atrocities for two decades.  Goulart, neutral in the Cold War, had allowed Communists to participate in government and had nationalized an International Telephone and Telegraph Company subsidiary. ITT’s president was friends with CIA Director John McCone, who later worked for ITT.

In 1965, after a botched 1958 Eisenhower-instigated coup against Indonesia’s Sukarno, another coup installed Suharto, whose regime murdered between 500,000 and 1 million Indonesians.  The CIA provided lists of thousands of suspected Communists for Indonesia’s army to kill. Appalled at Sukarno’s Cold War non-alignment, the CIA had been concocting a pornographic video of Sukarno to discredit him.

In 1973, a Nixon-Kissinger-engineered coup replaced Chile’s Salvador Allende, who was killed, with Augusto Pinochet, whose reign of terror murdered thousands for more than a decade.  The Rockefeller-organized Business Group for Latin America, including ITT, PepsiCo, and Anaconda Mining Company, covertly supported anti-Allende campaigns.

We’re taught the U.S. brings freedom to the world.  But what freedom is this? The freedom to live without your parents who’ve been murdered?  The freedom to be tortured for caring about the poor?

So why is Iran, rather than the U.S., considered dangerous?  Why is Venezuela an enemy? Because they’ve broken the Four Commandments of the benighted clique who crafts U.S. foreign policy:

Do not obstruct U.S. businesses’ profit-making abroad.  High profits, like high grades, indicate success. Do not help the poor or give land to the landless.  Be friends with our friends, enemies with our enemies. Do not reject U.S. military bases and weapons.

Look what befell Ecuador’s former President Correa.  He sued Chevron, reduced poverty, joined Venezuela and Cuba’s regional economic group, granted asylum to Julian Assange, and refused to renew the U.S. military’s 10-year lease on a base in 2009.  In 2010, this popular president was nearly killed by rioting police. And we’re to believe the U.S. clique was uninvolved?

We’re ruled by a mentally ill breed whose consciousness is in their wallets, not in their hearts, and who deny us what’s needed most to nurture world peace:  the freedom to care.

UPDATE (September 2019): Kristin Christman offers apologies for a mistake in the commentary above.  She wrote that a Kennedy-instigated coup murdered Congo’s Patrice Lumumba, when, in fact, it was Eisenhower who circumlocutiously gave the order for the assassination.  The charismatic Lumumba, determined to keep the mineral-rich Congo neutral in the Cold War, was brutally killed on January 17, 1961, three days prior to Kennedy’s inauguration.  The murder was not made public until a month later.  Kennedy was greatly shocked by the news, for he had even suggested the possibility of supporting the release of Lumumba and integrating him into the Congolese government.  The Kennedy administration, however, ended up supporting the cruel and repressive Mobutu, who had been present during Lumumba’s beatings.  Worldwide demonstrations condemned the assassination of this inspiring and courageous leader, and in 2002, the Belgian government apologized for its major part in the murder and set up a fund to promote democracy in the Congo.  The CIA has never admitted to its own lead role.”

Kristin Christman is a contributing author to the forthcoming anthology Bending the Arc (SUNY Press).