Canadian peace activists have begun to mobilize to stop the Liberal government under Prime Minister Justin Trudeau from spending $19 billion for 88 new fighter jets. On Friday, July 24, we held a National Day of Action Strike for Climate Peace, No New Fighter Jets. There were 22 actions across the country, we stood outside the constituency offices of our Members of Parliament (MP) with signs and delivered letters. Click here to view photos and videos from the day of action. 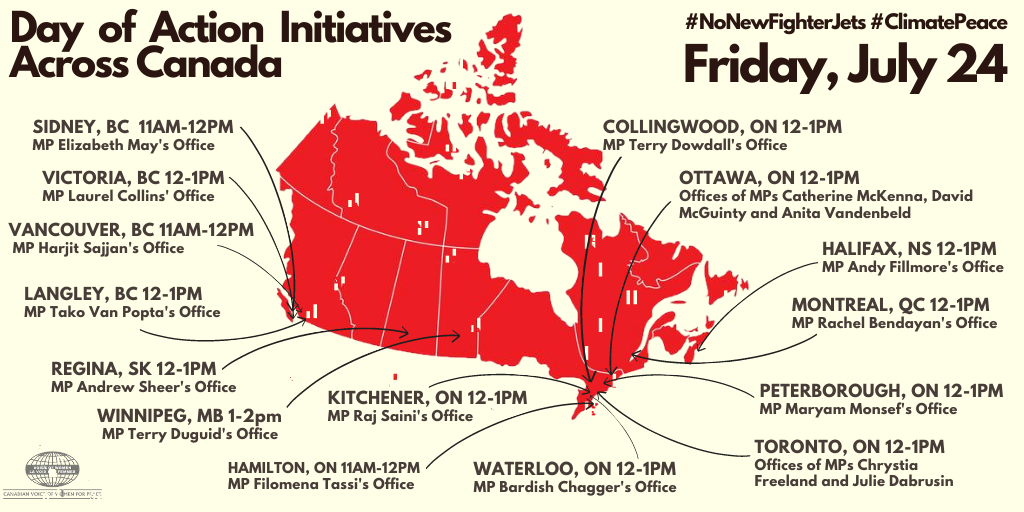 The Day of Action took place one week before the bids were due for the fighter jet competition. Arms manufacturers submitted their proposals to the Canadian government on Friday, July 31. In the competition are Lockheed Martin’s F-35 stealth fighter, Boeing’s Super Hornet and SAAB’s Gripen. The Trudeau government will select a new combat aircraft in early 2022. As an aircraft has not been chosen and a contract has not been signed, we are intensifying pressure on the Canadian government to permanently cancel the competition.

The Day of Action was led the Canadian Voice of Women for Peace, World BEYOND War and Peace Brigades International-Canada and supported by several peace groups. It involved people on the streets and a social media campaign to raise public and political awareness about our opposition to the government buying new carbon-intensive combat aircraft. We used the hashtags #NoNewFighterJets and #ClimatePeace to convey how these jets prevent peace and climate justice. 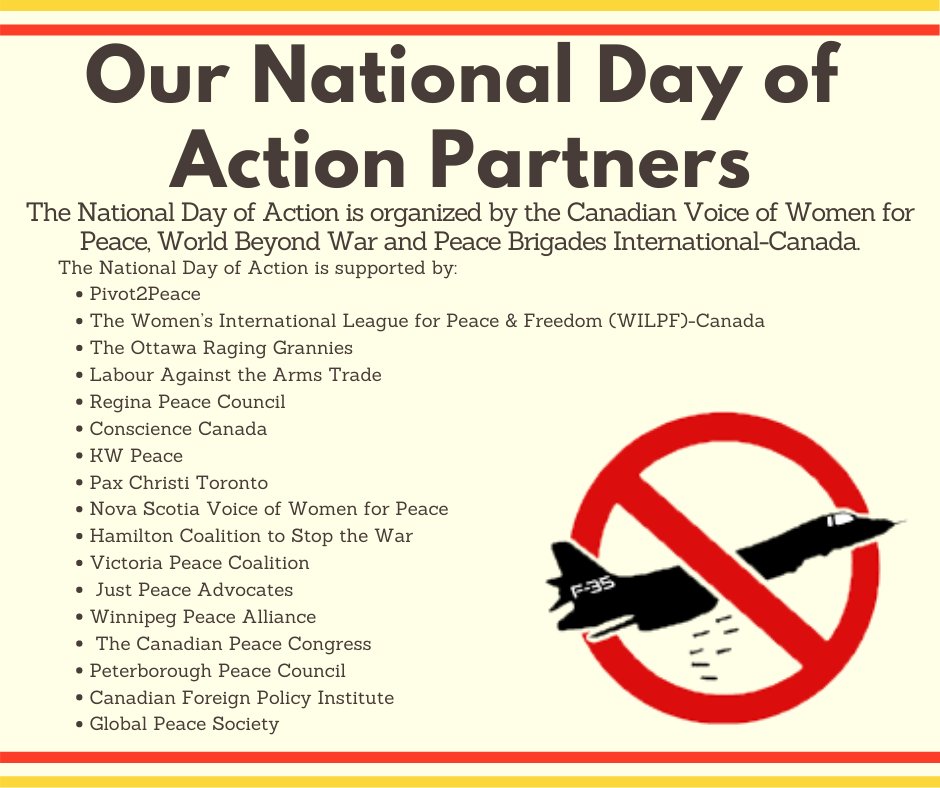 On the west coast, there were four actions in British Columbia. In the provincial capital, the Victoria Peace Coalition demonstrated outside of New Democratic Party (NDP) MP Laurel Collins’ office. The NDP regrettably supports the federal government’s acquisition of new fighter jets as stated in their 2019 election platform. The NDP has also called for an increase to military spending and more equipment for the military after the release of the defence policy Strong Secure Engaged in 2017.

In Sidney, Dr. Jonathan Down wore his scrubs and held a sign “Medicine not Missiles” as he stood with other World BEYOND War activists outside Green Party MP Elizabeth May’s office. Though the Green Party of Canada is against the F-35, it has not come out against the fighter jet procurement. In its 2019 election platform, the Green Party stated its support for “a consistent capital investment plan with stable funding” so that the military has the equipment they need. Activists want the Green Party to issue a clear, unequivocal statement against the procurement of any fighter jet.

In Vancouver, the Women’s International League for Peace and Freedom Canada stood in front of the Defence Minister Liberal MP Harjit Sajjan’s office. The Liberal Party argues that Canada needs fighter jets to fulfill our commitments to NATO and NORAD. In their letter to the Defence Minister, WILPF-Canada wrote that funding should instead go to a national childcare programme and other programs to assist women such as affordable housing not to fighter jets. In Langley, World BEYOND War activist Marilyn Konstapel received excellent media coverage of her action with other activists outside Conservative MP Tako Van Popta’s office.

On the prairies, the Regina Peace Council held an action outside of the office of MP Andrew Scheer, leader of the Conservative Party, in Saskatchewan. President of the Council, Ed Lehman, also published a letter to the editor against the defence procurement in the Saskatoon Star Phoenix newspaper. Lehman wrote, “Canada does not need fighter jets; we need to stop fighting and make permanent the UN global ceasefire.”

When the Conservative Party was in power from 2006 to 2015, the Stephen Harper-led government wanted to buy 65 F-35s, but was unable to proceed because of the controversies over the price and the sole-source nature of the procurement. The Parliamentary Budget Officer released a report that challenged the government’s cost projections for the F-35. Peace activists also launched a campaign No Stealth Fighters, which caused the government to put off the procurement. Today’s Liberal Party wants to buy even more fighter jets than the Conservative Party did a decade ago.

In Manitoba, the Peace Alliance Winnipeg demonstrated at the office of Liberal MP Terry Duguid, the Parliamentary Secretary to Minister of the Environment and Climate Change. In an interview with the local newspaper, the chair of the alliance Glenn Michalchuk explained that fighter jets emit excessive carbon emissions and contribute to the climate crisis, so Canada cannot buy them and achieve our Paris Agreement target.

There were several actions around the Province of Ontario. In the capital, members of Ottawa Peace Council, Pacifi and Peace Brigades International-Canada (PBI-Canada) delivered letters to and demonstrated outside the offices of Liberal MP David McGuinty, Liberal MP Catherine McKenna, and Liberal MP Anita Vandenbeld. Brent Patterson of PBI-Canada argued in a blog post that was widely shared that more jobs could be created in the green economy than building fighter jets citing research from the Costs of War Project.

In Ottawa and Toronto, the Raging Grannies rallied at their MPs’ offices and they also released a fantastic new song “Take Us Out of the Jet Game.” Pax Christi Toronto and World BEYOND War held a rally with colourful, creative signs such as “Cool Your Jets, Support a Green New Deal Instead” outside Liberal MP Julie Dabrusin’s office. In front of the building of Deputy Prime Minister & MP Chrystia Freeland’s office, there was a large crowd with members of the Canadian Voice of Women for Peace and the Communist Party of Canada Marxist-Leninist (CPCML).

The Hamilton Coalition to Stop the War had a furry mascot at their demonstration outside Liberal MP Filomena Tassi’s office in Hamilton. Ken Stone brought his Labrador dog Felix with sign on its back “We don’t need fighter jets, we need climate justice.” The group marched and then Ken gave a rousing speech to the crowd that gathered.

In Collingwood, Pivot2Peace sang and protested outside Conservative MP Terry Dowdall’s office. In an interview with the local media, one of the activists said, “For fighting the problems we have now, fighter jets are absolutely useless.” The Peterborough Peace Council rallied outside the office of Liberal MP Maryam Monsef who is also the Minister for Women & Gender Equality to call on her to “wage peace not war.” Jo Hayward-Haines of the Peterborough Peace Council published a letter in the local newspaper urging Monsef, who is an Afghan-Canadian and knows about the adverse impacts of war, to cancel the combat aircraft.

Activists with KW Peace and Conscience Canada united with Mennonite church members to rally outside Liberal MP Raj Saini’s office in Kitchener and Liberal MP Bardish Chagger’s office in Waterloo. They held lots of signs and a large banner “Demilitarize, Decarbonize. Stop the Wars, Stop the Warming” and passed out leaflets. Many cars honked in support.

In Montreal, Quebec, members of the Canadian Voice of Women for Peace and the CPCML stood outside Liberal MP Rachel Bendayan’s office in Outremont. They were joined by members of the Canadian Foreign Policy Institute (CFPI). CFPI director Bianca Mugyenyi published a powerful piece in The Tyee “No, Canada Doesn’t Need to Spend $19 Billion on Jet Fighters.” She criticized the deadly and destructive past deployments of Canadian combat aircraft in Serbia, Libya, Iraq and Syria.

On the east coast, members of the Nova Scotia Voice of Women for Peace protested outside of Liberal MP Andy Fillmore’s Office in Halifax and at Liberal MP Darren Fischer’s office in Dartmouth. The women held a large sign “Fighter jets can’t fight sexism, racism, poverty, COVID 19, inequality, oppression, homelessness, unemployment and climate change.” They want demilitarization and conversion of the arms industries in the province to a caring economy. Nova Scotia-based company IMP Group is part of the SAAB Gripen bid and is lobbying the federal government to pick the Swedish fighter jet, so it can assemble and maintain it at the company’s hangar in Halifax.

Lockheed Martin has a major presence in Canada with offices in Halifax and in Ottawa. In February, the company put up posters in bus stops around the Parliament building in the capital touting the job benefits of their stealth fighters. Since 1997, the Canadian government has spent over $540 million USD to participate in the F-35 development consortium. Australia, Denmark, Italy, Netherlands, Norway and the United Kingdom are part of the consortium and have already purchased these stealth fighters. Many defence analysts expect that Canada will follow its allies and select the F-35. This is exactly what we are trying to stop.

We are confident that with enough pressure that we can force the minority Trudeau-led Liberal government to postpone or cancel the fighter jet procurement. To succeed, we need an intersectional movement and international solidarity. We are trying to garner support from environmental groups and the faith community. We are also hoping that our campaign will lead to critical reflection and a serious public debate about militarism and military spending in Canada. With World BEYOND War next year in Ottawa, Canadian peace groups are having a major international peace conference Divest, Disarm and Demilitarize and a protest of the CANSEC arms show where we will challenge the military-industrial complex and call for the cancellation of the fighter jet procurement. We hope you will join us in Canada’s capital from June 1-6, 2021!

To learn more about our No New Fighter Jets campaign, visit the Canadian Voice of Women’s web page and sign our World BEYOND War petition.

Tamara Lorincz is a member of the Canadian Voice of Women for Peace and the World BEYOND War Advisory Board.