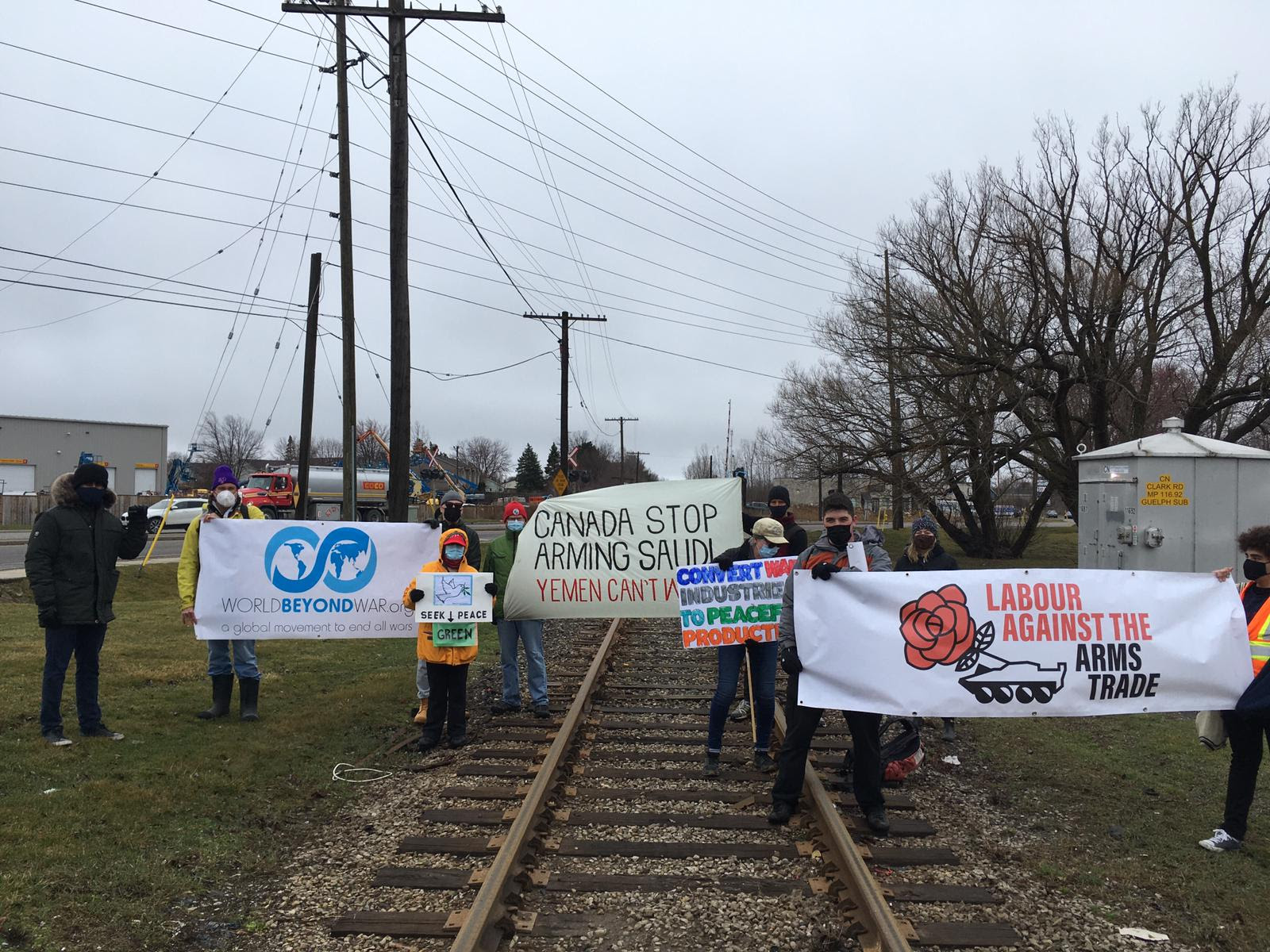 The activists are calling on General Dynamics to end its complicity in the brutal Saudi-led military intervention in Yemen and calling on the Canadian government to end arms exports to Saudi Arabia and expand humanitarian assistance for the people of Yemen.

It is estimated that 24 million Yemenis need humanitarian assistance – some 80% of the population – which is being thwarted by the Saudi-led coalition’s land, air, and naval blockade of the country. Since 2015, this blockade has prevented food, fuel, commercial goods and aid from entering Yemen. According to the World Food Program, nearly 50,000 people in Yemen are already living in famine-like conditions with 5 million just a step away. To add to the already dire situation, Yemen has one of the worst COVID-19 death rates in the world, killing 1 in 4 people who test positive.

Despite the global COVID-19 pandemic and calls from the United Nations for a global ceasefire, Canada has continued to export arms to Saudi Arabia. In 2019, Canada exported arms valued at $2.8 billion to the Kingdom—more than 77 times the dollar value of Canadian aid to Yemen in the same year.

Since the beginning of the pandemic, Canada has exported over $1.2 billion worth of arms to Saudi Arabia, the bulk of which are light armoured vehicles manufactured by General Dynamics, part of a $15 billion arms deal brokered by the Government of Canada. Canadian weapons continue to fuel a war that has led to the world’s largest humanitarian crisis in Yemen and heavy civilian casualties.

The light armoured vehicles manufactured by General Dynamics in London, Ontario are being transported by rail and truck to port where they are loaded onto Saudi ships.

“Since the multi-billion-dollar arms deal with Saudi Arabia was first signed, Canadian civil society has published reports, presented petitions, protested at government offices and weapons manufacturers across the country, and delivered several letters to Trudeau in which dozens of groups representing millions have repeatedly demanded Canada stop arming Saudi Arabia” said Rachel Small of World BEYOND War. “We’ve been left with no choice but to block the Canadian tanks headed to Saudi Arabia ourselves.”

“Workers want green, peaceful jobs, not jobs manufacturing weapons of war. We will continue to put pressure on the Liberal government to end arms exports to Saudi Arabia and work with unions to secure alternatives for arms industry workers,” said Simon Black of Labour Against the Arms Trade, a coalition of peace and labour activists working to end Canada’s participation in the international arms trade.

“What our community needs is government funding for rapid conversion from military exports back to production for human needs, as these plants used to do,” says David Heap of People for Peace London. “We call for immediate public investment in much-needed green transport industries that will ensure good jobs for Londoners while protecting peace and human rights in the world.”

Follow twitter.com/wbwCanada and twitter.com/LAATCanada for photos, videos, and updates during the rail blockade.