War and war propaganda have often fueled and been fueled by racism, xenophobia, religious hatred, and other types of bigotry.

Historian Kathleen Belew says there has always been a correlation in the United States between the aftermath of war and the rise of white supremacist violence.

“If you look, for instance, at the surges in Ku Klux Klan membership, they align more consistently with the return of veterans from combat and the aftermath of war than they do with anti-immigration, populism, economic hardship, or any of the other factors that historians have typically used to explain them,” she says.

Here is an excerpt from War Is A Lie by David Swanson:

What makes the most fantastic and undocumented lies credible are differences and prejudices, against others and in favor of our own. Without religious bigotry, racism, and patriotic jingoism, wars would be harder to sell.

Religion has long been a justification for wars, which were fought for gods before they were fought for pharaohs, kings, and emperors. If Barbara Ehrenreich has it right in her book Blood Rites: Origins and History of the Passions of War, the earliest precursors to wars were battles against lions, leopards, and other ferocious predators of people.16 In fact, those predatory beasts may be the base material from which gods were invented—and un- manned drones named (e.g., “the Predator”). The “ultimate sacrifice” in war may be intimately connected with the practice of human sacrifice as it existed before wars, as we know them, came to be. The emotions (not the creeds or accomplishments, but some of the sensations) of religion and war may be so similar, if not identical, because the two practices have a common history and have never been far apart.

The crusades and colonial wars and many other wars have had religious justifications. Americans fought religious wars for many generations prior to the war for independence from England. Captain John Underhill in 1637 described his own heroic war making against the Pequot:

Captaine Mason entering into a Wigwam, brought out a fire-brand, after hee had wounded many in the house; then hee set fire to the Westside…my selfe set fire on the South end with a traine of Powder, the fires of both meeting in the center of the Fort blazed most terribly, and burnt all in the space of halfe an houre; many couragious fellowes were unwilling to come out, and fought most desperately…so as they were scorched and burnt…and so perished valiantly…. Many were burnt in the Fort, both men, women, and children.17

This Underhill explains as a holy war: “The Lord is pleased to exercise his people with trouble and afflictions, that hee might appeare to them in mercy, and reveale more cleerely his free grace unto their soules.”18

Underhill means his own soul, and the Lord’s people are of course the white folks. The Native Americans may have been courageous and valiant, but they were not recognized as people in the full sense. Two and a half centuries later, many Americans had developed a far more enlightened outlook, and many had not. President William McKinley viewed Filipinos as in need of military occupation for their own good.

By his own account, McKinley in 1899 told a gathering of Methodists he hadn’t wanted the Philippines, and “when they came to us, as a gift from the gods, I did not know what to do with them.” McKinley said he had prayed and received the following enlightenment. It would be “cowardly and dishonorable” to give the Philippines back to Spain, “bad business” to give them to Germany or France, and would supposedly create “anarchy and misrule” to leave the Philippines to the Filipinos. So, by divine guidance, McKinley saw that he had no choice: “There was nothing left for us to do but to take them all, and to educate the Filipinos, and uplift and civilize and Christianize them.” McKinley was proposing to civilize a nation with a university older than Harvard and to Christianize a population that was largely Roman Catholic.19

It is doubtful many members of the delegation of Methodists questioned McKinley’s wisdom. As Harold Lasswell noted in 1927, “The churches of practically every description can be relied upon to bless a popular war, and to see in it an opportunity for the triumph of whatever godly design they choose to further.” All that was needed, Lasswell said, was to get “conspicuous clerics” to support the war, and “lesser lights will twinkle after.” Propaganda post- ers in the United States during World War I showed Jesus wearing khaki and sighting down a gun barrel. Lasswell had lived through a war fought against Germans, people who predominantly belonged to the same religion as Americans.20 How much easier it is to use religion in wars against Muslims in the 21st century. Karim Karim, an associate professor at Carleton University’s School of Journalism and Communication, writes:

The historically entrenched image of the ‘bad Muslim’ has been quite useful to Western governments planning to attack Muslim-majority lands. If public opinion in their countries can be convinced that Muslims are barbaric and violent, then killing them and destroying their property appears more acceptable.20

In reality, of course, nobody’s religion justifies making war on them, and U.S. presidents no longer claim it does. But Christian proselytization is common in the U.S. military, and so is hatred of Muslims. Soldiers have reported to the Military Religious Freedom Foundation that when seeking mental health counseling, they have been sent to chaplains instead who have coun- seled them to stay on the “battlefield” to “kill Muslims for Christ.”22

Religion can be used to encourage the belief that what you are doing is good even if it makes no sense to you. A higher being understands it, even if you don’t. Religion can offer life after death and a belief that you are killing and risking death for the highest possible cause. But religion is not the only group difference that can be used to promote wars. Any difference of culture or language will do, and the power of racism to facilitate the worst sorts of human behavior is well established. Senator Albert J. Beveridge (R-IN) of- fered the Senate his own divinely guided rationale for war on the Philippines:

God has not been preparing the English-speaking and Teutonic peoples for a thousand years for nothing but vain and idle self-contemplation and self-admiration. No! He has made us the master organizers of the world to establish system where chaos reigns.23

The two world wars in Europe, while fought between nations now typically thought of as “white,” involved racism on all sides as well. The French newspaper La Croix on August 15, 1914, celebrated “the ancient élan of the Gauls, the Romans, and the French resurging within us,” and declared that “The Germans must be purged from the left bank of the Rhine. These infa- mous hordes must be thrust back within their own frontiers. The Gauls of France and Belgium must repulse the invader with a decisive blow, once and for all. The race war appears.”24

Three years later it was the United States’ turn to lose its mind. On December 7, 1917, Congressman Walter Chandler (D-TN) declared on the floor of the House:

This kind of thinking helps not only in easing the war-funding check- books out of the pockets of Congress members, but also in allowing the young people they send to war to do the killing. As we’ll see in chapter 5, killing does not come easily. About 98 percent of people tend to be very resistant to killing other people. More recently, a psychiatrist developed a methodology to allow the U.S. Navy to better prepare assassins to kill. It includes techniques, “to get the men to think of the potential enemies they will have to face as inferior forms of life [with films] biased to present the enemy as less than human: the stupidity of local customs is ridiculed, local personalities are presented as evil demigods.”26

It is much easier for a U.S. soldier to kill a hadji than a human being, just as it was easier for Nazi troops to kill Untermenschen than real people. William Halsey, who commanded the United States’ naval forces in the South Pacific during World War II, thought of his mission as “Kill Japs, kill Japs, kill more Japs,” and had vowed that when the war was over, the Japanese language would be spoken only in hell.27

If war evolved as a way for the men who killed giant beasts to keep busy killing other men as those animals died out, as Ehrenreich theorizes, its part- nership with racism and all other distinctions between groups of people is a long one. But nationalism is the most recent, powerful, and mysterious source of mystical devotion aligned with war, and the one that itself grew out of war making. While knights of old would die for their own glory, modern men and women will die for a fluttering piece of colored cloth that itself cares nothing for them. The day after the United States declared war on Spain in 1898, the first state (New York) passed a law requiring that school children salute the U.S. flag. Others would follow. Nationalism was the new religion.28

Samuel Johnson reportedly remarked that patriotism is the last refuge of a scoundrel, while others have suggested that, on the contrary, it is the first. When it comes to motivating warlike emotions, if other differences fail, there is always this: the enemy does not belong to our country and salute our flag. When the United States was lied more deeply into the Vietnam War, all but two senators voted for the Gulf of Tonkin resolution. One of the two, Wayne Morse (D-OR) told other senators that he had been told by the Pentagon that the alleged attack by the North Vietnamese had been provoked. As will be discussed in chapter 2, Morse’s information was correct. Any attack would have been provoked. But, as we will see, the attack itself was fictional. Morse’s colleagues did not oppose him on the grounds that he was mistaken, however. Instead, a senator told him, “Hell, Wayne, you can’t get into a fight with the president when all the flags are waving and we’re about to go to a national convention. All [President] Lyndon [Johnson] wants is a piece of paper telling him we did right out there, and we support him.”29

As the war ground on for years, pointlessly destroying millions of lives, senators on the Foreign Relations Committee discussed in secret their concern that they had been lied to. Yet they chose to keep quiet, and records of some of those meetings were not made public until 2010.30 The flags had apparently been waving through all the intervening years.

War is as good for patriotism as patriotism is for war. When World War I began, many socialists in Europe rallied to their various national flags and abandoned their struggle for the international working class.31 Still today, nothing drives American opposition to international structures of government like U.S. interest in war and insistence that U.S. soldiers never be subject to any authority other than Washington, D.C. 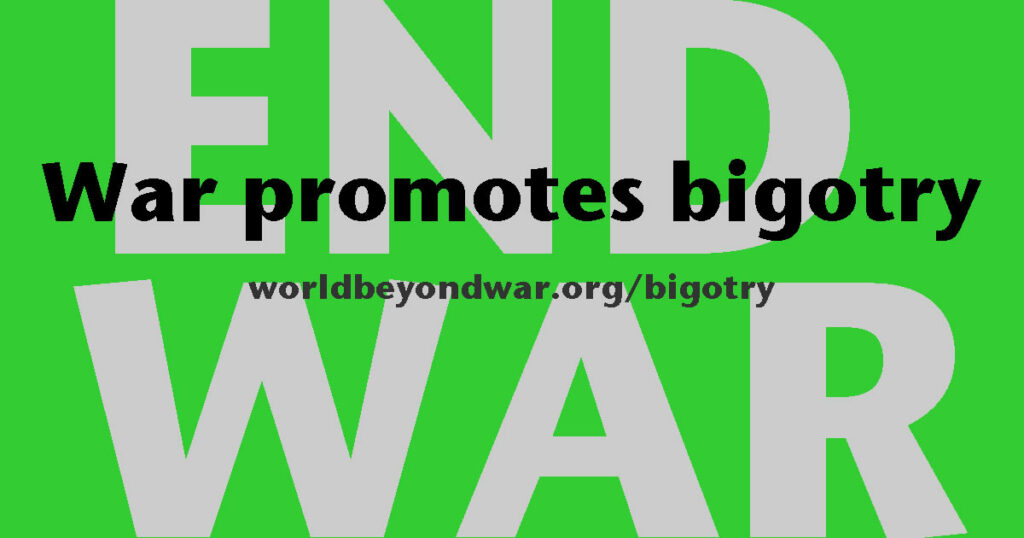