I’m still reeling after the horrific display of militarized policing we saw here in Toronto yesterday, in many ways a textbook paramilitary operation. All to evict fewer than 20 people living in a tent encampment in a public park, people with no other place to go.

Hundreds of police mobilized yesterday first to violently evict the people living in a Toronto homeless encampment at Lamport stadium, and then proceeded to beat, pepper spray, and violently arrest many of the hundreds who showed up to support and protect the people in tents.

Video moments ago as Toronto Police move in and begin arresting those inside the homeless encampment at Lamport Stadium @CityNews pic.twitter.com/RLm3yMlK9w

More than 30 people were ultimately arrested, and many others needed medical care. Several were brought to the ER and hospitalized for serious injuries caused by police violence including gashes on people’s faces, a broken wrist, several serious concussions, and more. 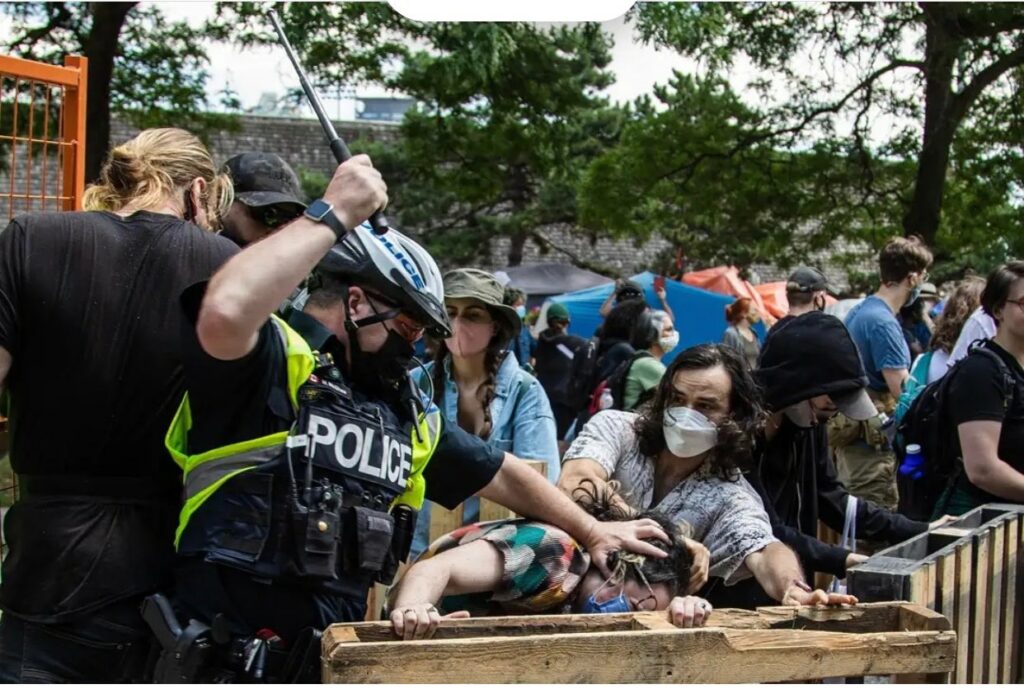 Members of the media and those taking photos were subjected to the same violence when they insisted on their right to document what was happening.

The horrific police violence happened at the site of the eviction itself, but also a few hours later outside 14 Division. This type of violence against people simply gathered outside a police station, seeking info on those arrested and awaiting their release, is unheard of here.

Cw: police beating demonstrators at the front of the station. One says "who's good to go? Orange bag!?" And points at a peaceful demonstrator. Some indiscriminate pepper spraying. Many people beat and sprayed. Some thrown to ground and tackled. Air is bad here. #topoli pic.twitter.com/BVynKGqgAq

These were textbook paramilitary operations — the police came in with horses, with riot squads, they marched in formation with their weapons out, set up metal barricades to trap people inside, and refused to let media have access.

Police tearing down tents, leading some away in handcuffs pic.twitter.com/dD0ECrIdpr

Days like yesterday only reinforce our commitment to defund and demilitarize the police, and to continue to stand with those who face the brunt of their violence.