Will the U.S. Senate Let the People of Yemen Live?

UPDATE: The Senate rejected the House’s version because of unrelated AIPAC nonsense the House inserted. So, both houses are set to vote again.

In 1973 the War Powers Resolution weakened the U.S. Constitution’s placement of the power to start and end wars with the first branch of the U.S. government, the Congress. The new law carved out exceptions to allow presidents to start wars. However, it also created procedures by which a single member or group of members of Congress could force a vote in Congress on whether to end a war. Despite weakening the written law, the War Powers Resolution may finally be about to prove itself to have strengthened the ability of proponents of peace to put an end to mass slaughter. 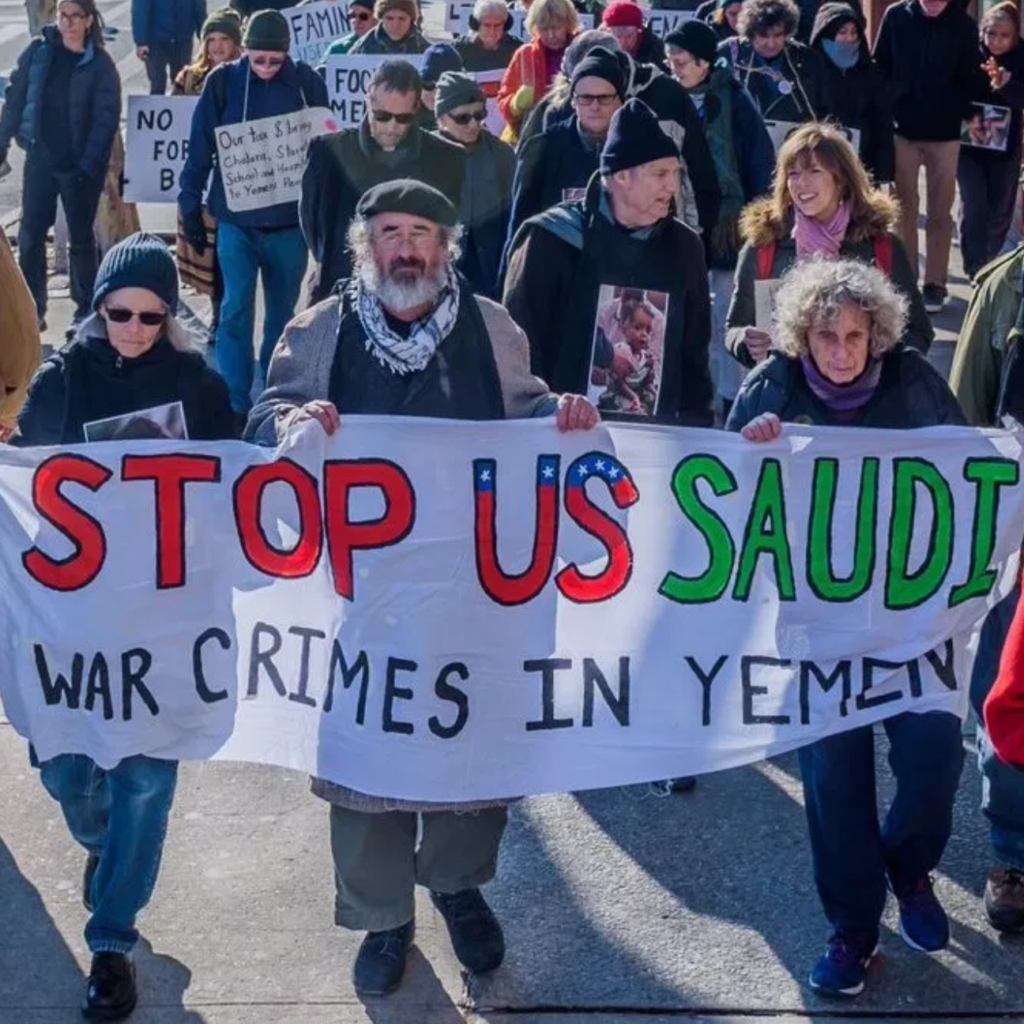 Since 1973 we’ve seen numerous wars waged in blatant violation of both the Constitution and the War Powers Resolution, not to mention the UN Charter and the Kellogg Briand Pact. But we’ve also seen Congress members like my friend Dennis Kucinich force votes on whether to end wars. These votes have usually failed. And the Congress that ended this past December illegally refused (in the House) to even hold such votes. But debates have been created, people have been informed, and the notion that a law still exists that merits respect has been kept alive.

Never yet have both houses of Congress jointly passed a War Powers Resolution bill to end a war. That may soon change. On Wednesday, the House voted 248-to-177 to end one of the many current U.S. wars, that on Yemen. (Well, sort of. Keep reading.) Back in December, during the previous Congress, the Senate passed the same resolution (or nearly identical). So, the big question is now whether the Senate will do it again. If you’re from the United States, I recommend calling (202) 224-3121, telling the operator what state you’re from, and asking to speak with the offices of each of your two senators. Ask them if they will vote to let the people of Yemen live! Or click here to send them both an email.

Now, the Senate passed this in December, and the Senate didn’t change much come January. But a vote to actually pass a bill together with the House, even in the face of a veto threat, is not the same as a vote to pass something the House is blocking. Back in December the hundreds of thousands of lives at stake in Yemen were apparently rendered meaningful by the one death of a Washington Post reporter, whose death has now apparently become old news, while the deaths of hundreds of thousands of men, women, and children (busloads of little children) continue to not be worth much. Partisan pressure is also evident in the House vote, in which every No vote came from a Republican and almost all of the Republicans cast No votes. The Senate has a majority of Republicans.

Still, observers believe there is a good chance of passage, finally, these many weeks into the new Congress, which may at long last do the right thing without effectively communicating that it really grasps the urgency. Yemen continues, day after gruesome day, to be the worst humanitarian disaster on earth, with tens of thousands dead and far worse looming if action is not taken quickly. According to the World Health Organization, 24.4 million Yemenis, 80 percent of the country, are in need of humanitarian assistance, millions of children are suffering, and 16.6 million people lack water and sanitation services.

As in other recent U.S. wars in the Middle East, a result of the U.S./Saudi war on Yemen (just like the result of the U.S. drone murders that helped create the wider war) has been increased terrorism. Along the way, the United States and its allies have in fact sometimes partnered with Al Qaeda. A primary U.S. ally in the region is, of course, Saudi Arabia, a government whose brutality and violence can match that of any entity on earth.

Congress has swallowed enough lies and empty promises from the White House and Pentagon. If this Congress is even the slightest bit more humanitarian than the last one, it will end the U.S. role in the war on Yemen immediately, an action which would make it difficult for Saudi Arabia to continue the war alone.

Let’s look at what the language of the bill says:

“. . . Congress hereby directs the President to remove United States Armed Forces from hostilities in or affecting the Republic of Yemen . . . .”

“For purposes of this resolution, in this section, the term ‘hostilities’ includes in-flight refueling, non-United States aircraft conducting missions as part of the ongoing civil war in Yemen.”

This would seem to suggest that members of the U.S. military cannot participate in any way in the war on Yemen.

Then come the loopholes:

“Nothing in this joint resolution may be construed to influence or disrupt any military operations and cooperation with Israel.”

The bill lists current participants in the war, with no mention of Al Qaeda or Israel. These two loopholes are ridiculous or dangerous depending on what’s done with them, and what Congress can reasonably be expected to do if they are abused. People who will claim that Venezuela harbors cells of Hezbollah intent on destroying your freedom, that Iran is building nuclear weapons, and that a wall is needed to save you from Mexican rapists might certainly be imagined claiming that the war on Yemen is against Al-Qaeda and/or that Israel has joined the war. Israel, for that matter, might actually join the war. And a Congress that won’t impeach Donald Trump after a long list of impeachable offenses, and with half the Congress claiming Trump was installed by a foreign government, is unlikely to impeach him for violating this new law.

If the point of the loopholes is not to undo the law, what is the point of them? Are fighting Al-Qaeda and fighting for Israel such sacred ideals that they have to be meaninglessly added into random legislation?

Then there’s the problem that Trump has threatened to veto.

Then there’s the problem that weapons sales to Saudi Arabia could roll on, no more illegal than before, following passage of this bill.

Of course, either house of Congress alone could refuse to allow a dime to be spent on U.S. war-making in Yemen. But there isn’t any mechanism, as far as I know, for a member of Congress to force either chamber, despite its “leadership,” to hold a vote on doing that. This is why making the War Powers Resolution real by finally using it is so valuable. Despite all the caveats, and despite all the steps that will remain to be taken, for Congress — after 46 years and more wars than anyone can count — to finally legislate the end of a particular war is ground breaking.

If Congress can end one war, why not eight more? Why not the ones that are threatened and not yet begun?

If the U.S. Congress can end a war, why not the legislatures of every junior partner in U.S.-led coalition wars?

If the U.S. Congress can end a war, why not also close a base?

If the Congress can end war after war, one by one, why not move some of the money, billion by billion, out of the war machine and put it to good use?

If people can persuade one or more members of Congress to force a vote and persuade a majority of Congress to pass that vote, perhaps people, even in the greatest purveyor of violence on earth, can begin to create the understanding needed to begin dismantling the institution of war altogether.