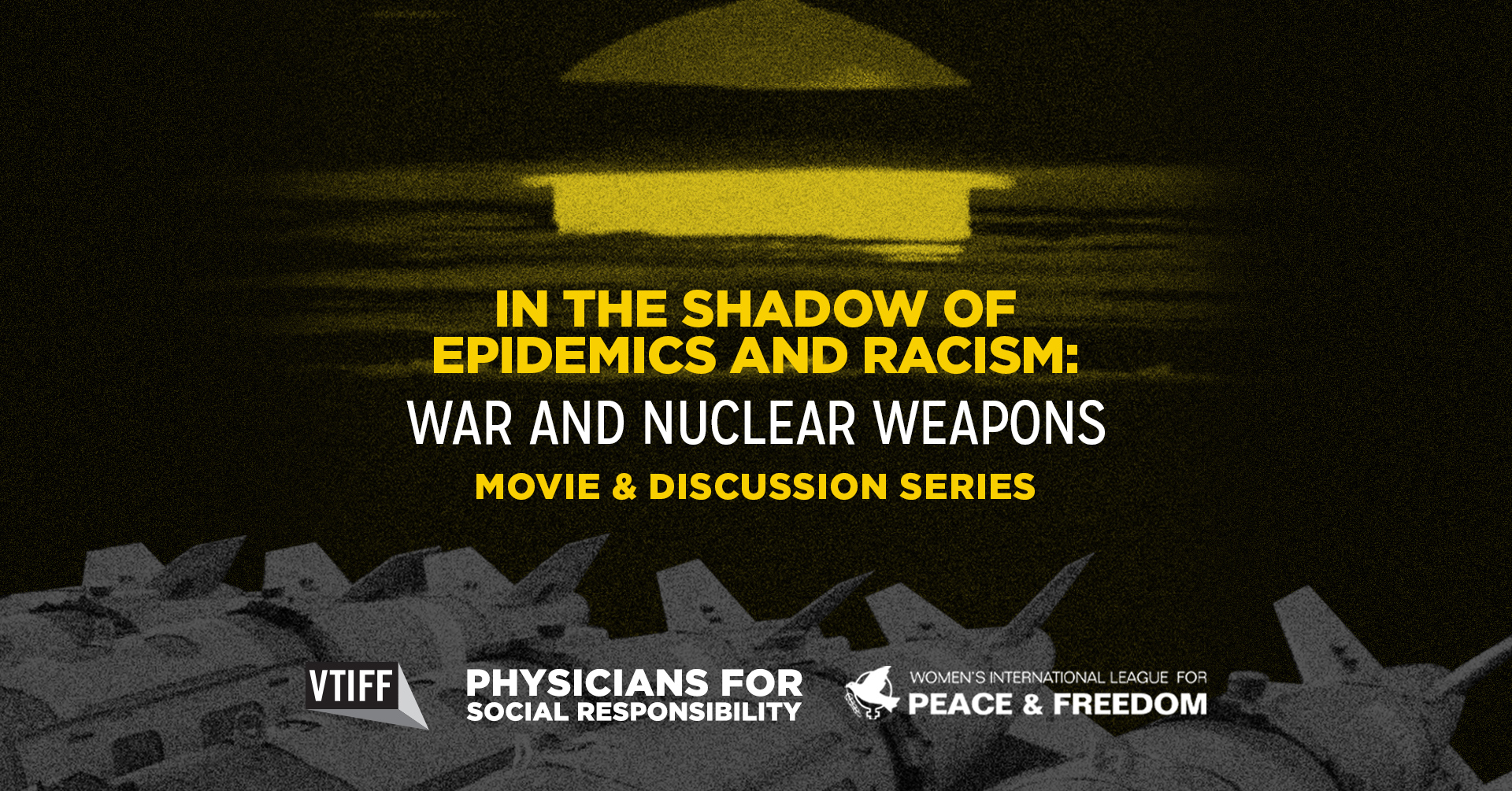 Join us for this series of discussions of films!  We recommend that you view each film ahead of time, and each title below has information about how to view it online – they are either available for free or for very low cost. Then you can join us for the live (virtual) discussions.

Register HERE to receive a link to all the post screening discussions.

Why launch a film series about war and nuclear weapons now?

As the corona virus rages across the globe and racism rears its ugly head through police violence against people of color and protestors, we must not forget our ongoing struggle to preserve humanity from climate degradation and the ultimate expression of state violence – the imminent threat of nuclear annihilation.

Eliminating viral plagues, healing our culture of racism, and healing our environment are complex challenges that require enormous ongoing research and resources; eliminating nuclear weapons, is relatively simple. We built them, and we can take them apart. Doing so will pay for itself, and not building new ones will free up enormous sums of money and brain power to work on our more complex threats.

To understand why dismantling nuclear weapons quickly makes so much sense, one has to understand the logic of war, and the history and nature of these weapons. WILPF, PSR and VTIFF have partnered to offer a series of films and discussions to help us do just that, and what can be done to eliminate this threat.

1. The Moment in Time: The Manhattan Project

2000 | 56min | Directed by John Bass |
View on Youtube HERE
This Library of Congress and Los Alamos National Laboratory co-production uses interviews and oral histories with many of the key Manhattan Project scientists who helped build the bomb. The film charts the fear that the Nazis were working on an atomic bomb, and follows its development up to the explosion of the ‘Trinity” bomb on July 16, 1945 with scarce consideration given to the population living in the vicinity.

1937 | 104 min | Directed by Hugo Haas (also starring) |
View on Czech Film Archive site HERE (make sure to click on the CC link for English subtitles)
Adapted from a play by Karel Čapek, beautifully shot in expressive black and white and written at a time of increasing threat from Nazi Germany to Czechoslovakia. A bellicose, nationalist leader whose plans to invade a smaller country are complicated by a strange illness making its way through his nation. They call it the “white disease. The disease came from China and only affects people older than 45. Some scenes are creepily similar to events of today.

PBS Documentary highlighting how close we have come to destroying ourselves in the pursuit of nuclear superiority. Atomic weapons are man-made machines. Man-made machines sooner or later break. A very serious accident, or even atomic apocalypse is only a matter of time.

July 30, 7-8 PM ET (GMT-4) Discussion with Bruce Gagnon, Coordinator of the Global Network
Against Weapons and Nuclear Power in Space.

4. Dr. Strangelove, or How I Learned to Stop Worrying and Love the Bomb

Timeless classic starring Peter Sellers and considered one of the best black comedies of all time, an early attempt to deal with the insane contradiction of building civilization-ending weapons to preserve civilization, a contradiction that we have not yet resolved.

Aug 6, 7-8 PM ET (GMT-4) Discussion with Marc Estrin, critic, artist, activist, and author of
Kafka’s Roach: The Life and Times of Gregor Samsa, which explores, among
many other things, the ethical dilemma of nuclear weapons.

Dramatization of a nuclear attack on Sheffield, England from a month before, through 13 years after the destruction. May be the most realistic depiction ever made of what nuclear war would actually look like.

Dramatization of a little league pitcher who is so affected by a routine tour of a minuteman missile silo that he goes on strike until the nuclear threat is reduced, taking professional sports with him, and changing the world. Very entertaining and inspiring movie to remind each of us we can make a difference. Suitable for adolescents as well as adults. (Amazon Prime)

7. The Beginning of the End of Nuclear Weapons

2019 | 56 min | Directed by Álvaro Orús | Link to View available from July 8
The story of ordinary citizens working over 10 years to make the humanitarian case against nuclear weapons, and battling states with nuclear weapons to adopt the Treaty to Prohibit Nuclear Weapons in 2017, with the International Campaign Against Nuclear Weapons winning the Nobel Peace Prize.

Aug 9, 7-8 PM ET (GMT-4) Discussion with Alice Slater who serves on the Board of World BEYOND War and is a UN NGO Representative of the Nuclear Age Peace Foundation. She is on the Board of the Global Network Against Weapons and Nuclear Power in Space and the Advisory Board of Nuclear Ban-US supporting the efforts of the International Campaign to Abolish Nuclear Weapons (ICAN)  for the effective entry into force of the successfully negotiated Treaty for the Prohibition of Nuclear Weapons.