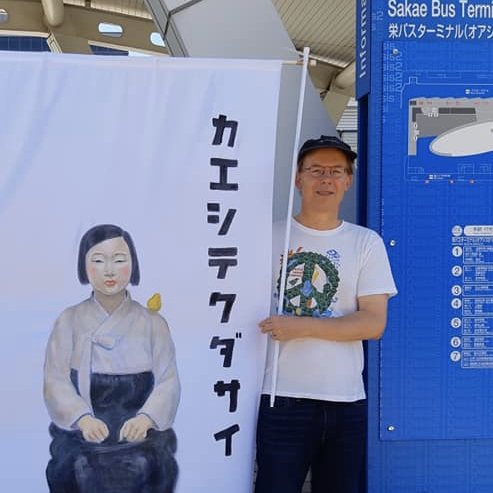 I discovered World BEYOND War through an online search. Through Z Magazine, Counterpunch, and other progressive journals and websites, I was already a fan of some of the great peace-builders whose names, articles, photos, and videos appear on World BEYOND War webpages, and I had already joined hundreds of street protests over the course of roughly 15 years in Japan, so the written information naturally caught my eye. In particular, I was especially impressed with the high-quality graphics and the upbeat atmosphere. World BEYOND War was like a beautiful seashell that I found on the seashore. So, I signed up and volunteered right away.

I live in Nagoya, Japan, which is Japan’s fourth largest city. Every Saturday here on a busy street corner in the main shopping district, there is a street protest against U.S. bases in Okinawa. Rain, snow, strong winds, hot and humid weather—nothing stops these dedicated voices of peace. I often join them on Saturdays. I’m also involved in efforts to end the Korean War; to document, learn from, and educate about the military sex trafficking of the Empire of Japan and the U.S.; to oppose historical denialism surrounding atrocities committed by Americans and Japanese; and in this year of the NPT (Treaty on the Non-Proliferation of Nuclear Weapons), to abolish nuclear weapons.

I lead chapter meetings a few times each year. A small group of people have helped me to organize activities, including potlucks and parties to discuss war issues, educational efforts, and peace-building work and our reclaiming of Armistice Day. We have had two events aimed at making Armistice Day a day to remember the work that people before us have done for peace, as part of the overall goal of creating a culture of peace. For the 100th anniversary of Armistice Day, I invited the famous photojournalist Kenji Higuchi to Nagoya to give a lecture. He gave a lecture about Japan’s use of poison gas and the general history of that weapon of mass destruction. His team of assistants displayed his photos in a large lecture hall.

My recommendation is to start asking questions and talking to people who are already a part of movements for peace. And of course you should read widely about international affairs and the writings of progressive historians, like Howard Zinn, to see what has been attempted in the past, to think on your own about what has worked and what has not. The problem of war is a relatively new problem in the long period during which Homo sapiens has roamed the Earth, and the formula for stopping war has yet to be perfected. Nothing is etched in stone. Society, culture, technology, etc. are constantly changing, so the challenges we face are constantly changing. And we need your ideas and actions in order for us all to find a way forward, one that goes “beyond” the institution and habit of war.

What keeps me inspired are the words and actions of other antiwar activists today and the memories of other activists. As they say, courage is contagious. Howard Zinn, among many other historians, proved this through his research on the people and organizations that generated social progress. He himself became an agent of state violence when he fought against fascism during WWII. But he later opposed war. He shared what he saw and the wisdom that he gathered. (See, for example, his book The Bomb published by City Lights in 2010). We members of Homo sapiens must learn from our mistakes. Now we are faced with the huge twin threats of nuclear war and global warming. Our very survival is at stake. The future sometimes appears quite bleak, but there are always good people in any large organization who stand up for sanity, freedom, peace, and justice. Their words and their example are what sustains me.