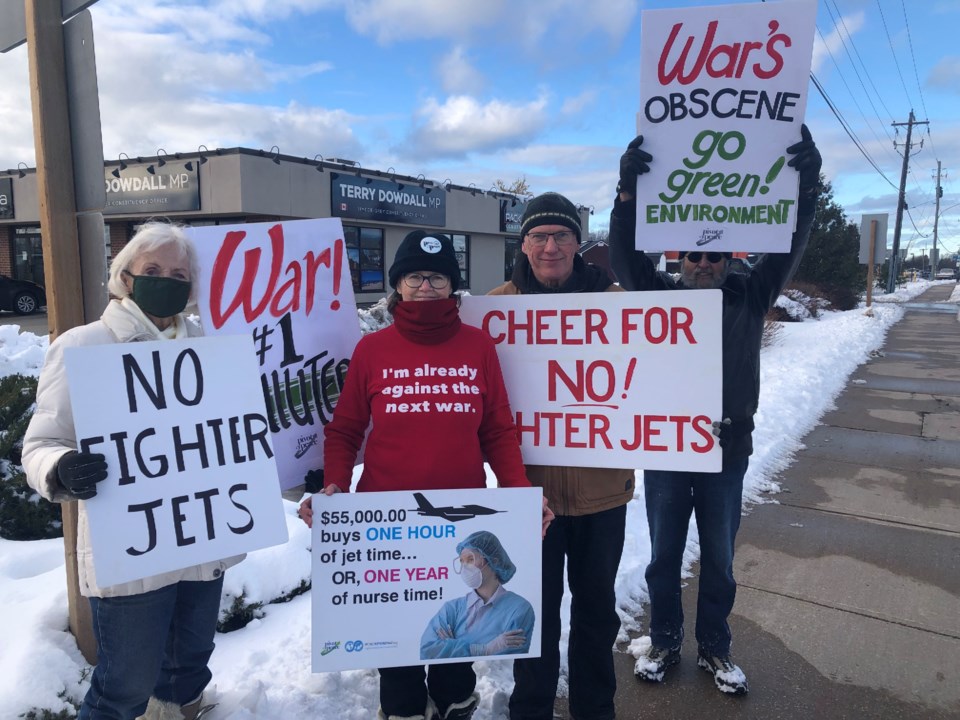 Frank took part in a number of peace demonstrations in the 60s, most notably the civil disobedience in 1964 that shut down the La Macaza air base containing Bomarc missiles. Until WBW, Gillian’s demonstrations were limited to joining Climate or Women’s or Black Lives Matter marches planned by others but after hearing a talk by Helen Peacock of Pivot2Peace and watching several talks by David Swanson, she was happy to become, with Frank, a founding member of the local Collingwood Chapter of WBW.

What kinds of WBW activities do you work on?

As members of the No New Fighter Jets Coalition we’re most interested in direct actions. As tempting as it is to join large Toronto demonstrations, we focus instead on our own small town so that WBW has a visible presence in this overwhelmingly Conservative riding. We are continually surprised at the support we get from passersby. Recently we’ve joined Helen Peacock to help with her exciting work getting Rotary connected to WBW.

Join WBW! If there isn’t a chapter near you, start one. You’ll feel immediately connected to a large and growing movement.

Desperate times. Doing something rather than nothing at all.

One of our signs juxtaposes the cost of a nurse for a year, with the cost of just one hour of one fighter jet’s operation. We delight in seeing people struggling to read it, then their eyes light up and we get a thumbs up or a wave or a honk. Occasionally, someone will roll down their window and shout, “I’m a nurse!”