VIDEO: A Call for the Universal Abolition of Nuclear Weapons 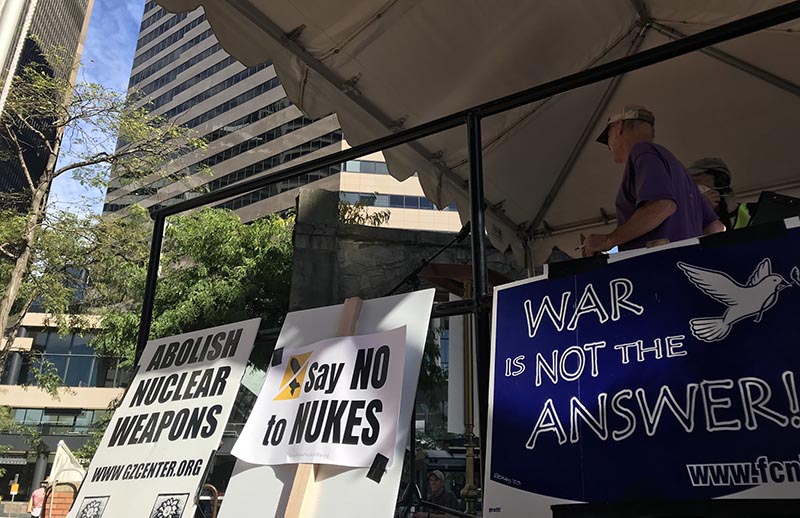 The event kicked off at Cal Anderson Park in Seattle and featured a march to and rally at the Henry M. Jackson Federal Building where are David Swanson of World Beyond War gave his keynote speech. Pirate TV was there.

In addition to David Swanson’s powerful talk, this video features several others:

Kathy Railsback is a practicing immigration lawyer and activist in residence at the Ground Zero Center for Nonviolent Action located on the border of the Kitsap submarine base, the largest stockpile of nuclear weapons in the Western Hemisphere. She talks a little bit about Ground Zero and the campaign for nuclear disarmament.

Tom Rogers has been a member of Ground Zero Center for Nonviolent Action in Poulsbo since 2004. A retired Navy Captain, he served in various capacities in the US Submarine Force from 1967 to 1998, including command of a nuclear fast attack submarine from 1988 to 1991. Since coming to Ground Zero he has provided a combination of operational experience with nuclear weapons and the willingness to use that expertise as a nuclear weapons abolitionist.

David Swanson is an author, activist, journalist, and radio host. He is executive director of WorldBeyondWar.org and campaign coordinator for RootsAction.org. Swanson’s books include War Is A Lie. He blogs at DavidSwanson.org and WarIsACrime.org. He hosts Talk World Radio. He is a Nobel Peace Prize nominee, and U.S. Peace Prize recipient. Thanks to Glen Milner for recording assistance. Recorded September 24th 2022 See also: abolishnuclearweapons.org