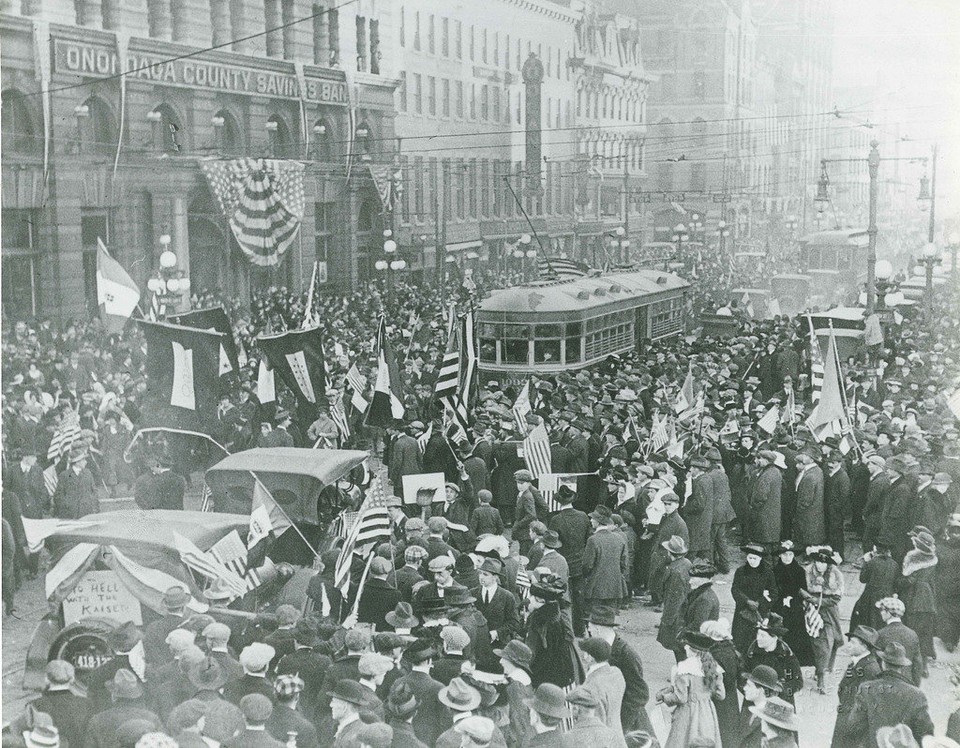 One hundred years ago this Nov. 11, the Great War, World War I, came to an end. People around the world rejoiced and celebrated the end of hostilities, a time to declare peace. The following year, 1919, the day became known as Armistice Day. It was not a day to celebrate war and warriors but a day to celebrate peace.

The British and German governments are issuing a unique joint appealto communities across the world to ring their church and other bells in unison at 11 a.m. on Armistice Day, Nov. 11, 2018, to mark the one-hundredth anniversary of the end of the awful slaughter.

In 1954, we dropped the name “Armistice Day” and adopted “Veterans Day.” We replaced a sacred day of thanksgiving with a day to glorify warriors. That was not the intent of veterans of World War I. Veterans rejoiced at no more artillery and mortar rounds ripping through young bodies, mustard gas searing lungs and burning skin, the end of machine gun fire projecting 450 rounds per minute, monster weapons of death like tanks, and weaponized aircraft that killed millions for Empire. People mourned for the mostly poor and working class soldiers drafted or lured by disinformation and propaganda lies.

When Armistice Day was declared one year after the war ended, people were beginning to understand that the bloodshed was not about valor or glory or medals or service, but about power and money. Just in the United States alone, 15,000 new millionaires were made in our short participation in the European war. Republican Herbert Hoover, director of the Food Administration in Democrat Woodrow Wilson’s administration, summed up the situation by noting: “Older men declare war but it is the young who fight and die.” He could have added “who fight and die for lies of the rich and powerful.”

Rory Fanning, a former U.S. Army Ranger with two deployments in Afghanistan and Iraq, has written: ” It gets clearer and clearer with each passing year that Veterans Day is less about honoring veterans than it is about easing the guilty consciences of those who have sent others to kill and die for reasons that have very little to do with democracy and freedom.”

Kurt Vonnegut, one of our great American writers, lived the misery of World War II as a U.S. infantryman in Europe. A character in Vonnegut’s “Breakfast of Champions” says: “Armistice Day has become Veterans Day. Armistice Day was sacred. Veterans Day is not. So, I will throw Veterans Day over my shoulder. Armistice Day I will keep. I don’t want to throw away any sacred things. Veterans Day celebrates ‘heroes’ and encourages going off to kill and be killed in a future war — or one of our current wars.”

Veterans for Peace of Broome County wishes to reclaim Armistice Day. Our group has petitioned all churches in Binghamton to ring their bells at 11 a.m. Sunday, Nov. 11, to commemorate the 100th anniversary of World War I. We urge Syracuse churches to join us by ringing their bells 11 times at the 11th hour of the 11th day of the 11th month.

At 1 p.m. Sunday, Nov. 11, Veterans for Peace in Binghamton will offer Armistice Day poppies to parade viewers (of a Veterans Day parade) as a remembrance of the horror of all wars. That same day, on the lawn of First Congregational Church, corner of Main and Front, Binghamton, the Stu Naismith Chapter Veterans for Peace will have a cemetery illustrating the dead of both the Vietnam War and Iraq/Afghanistan wars. The ratio of dead Americans to dead Vietnamese, Iraqi and Afghanistan people will be shown in the cemetery tombstone numbers.

We must comprehend the terrible human cost of war to deter us from making war again.