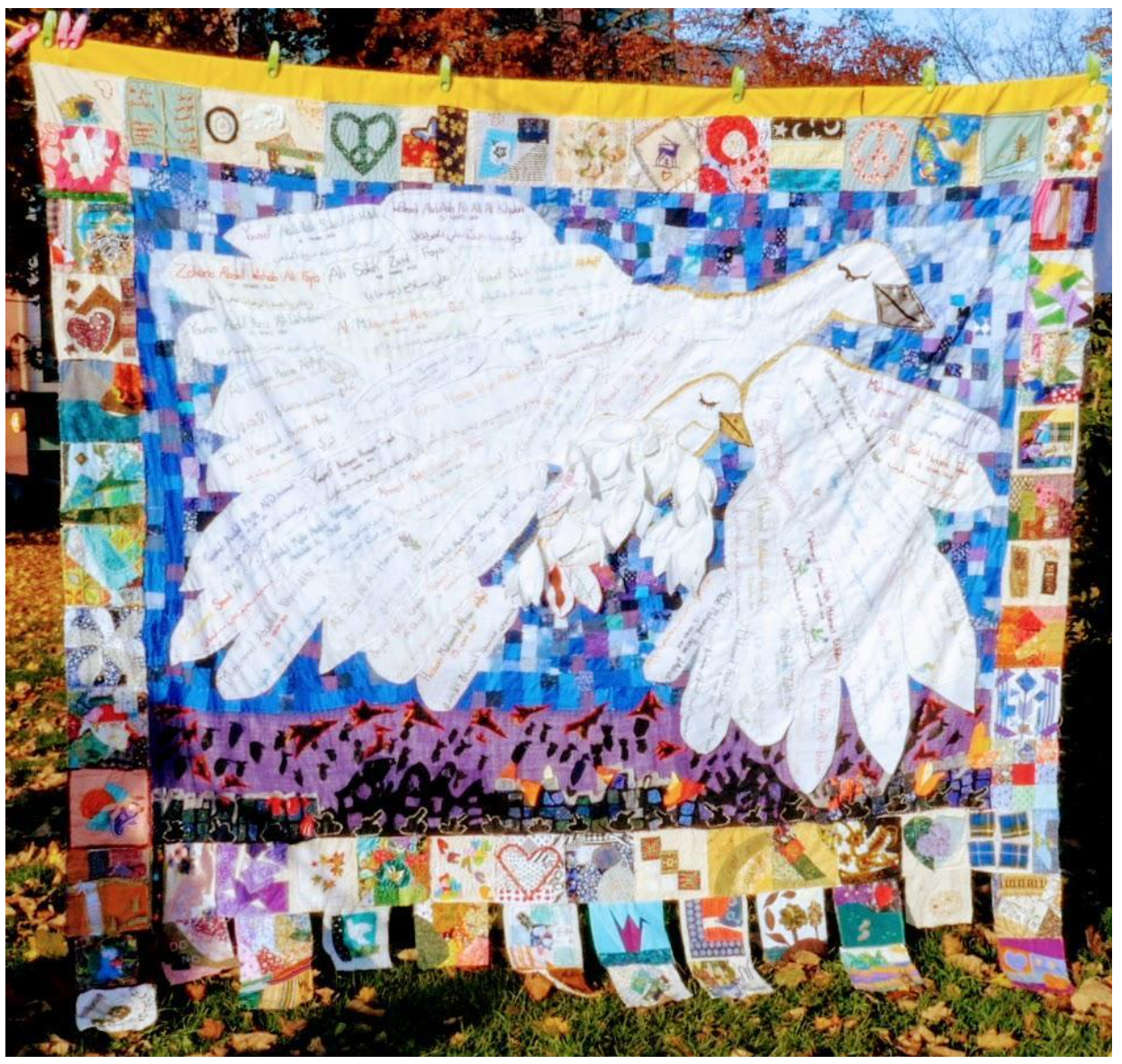 Nova Scotia Voice of Women for Peace held their annual White Peace Poppy ceremony entitled “Halifax Remembers Peace: Kjipuktuk 2021”.  Joan began with a land acknowledgment and spoke about connections of commemorating all victims of war to conversations with a Veterans for Peace member from Scotland in a recent webinar. Rana spoke about Afghan Women and placed a wreath on their behalf. Two other wreaths – one for all PTSD victims, refugees and environmental devastation and the other for the Children of the Future. Annie Verrall filmed the ceremony and will combine this film with our recent and only in person sewing session at the Local Council House of Women.

We gathered in the Peace and Friendship Park and hung the banner in the sunshine between a tree and a lamppost, not far from the platform that held a former statue, covered in small, painted orange stones. This place was a powerful place for NSVOW to bring the banner and to stand together for the first public sharing of this work – the work of so many women from Nova Scotia and Beyond. It is a powerful place because change has happened here, because decolonization is a little more visible and because of all those small orange stones that keep calling us.

We brought stories of other children, of their spirits. The names of 38 Yemeni children are embroidered in Arabic and English. In August 2018, in Yemen, 38 children and teachers were killed and many more wounded on a school trip. The bomb that struck their school bus also had a name – the laser-guided version of a Mk-82 bomb was a Lockheed Martin Bomb.

The children’s names rise above fighter jets, on the wings of a mother peace dove and her daughter, both winging above the destruction that bombs, warfare and militarism continue to rain down on the human family. Around the doves are handmade squares in a style known as ‘visible mending’ that hold the banner together, framing loss and hope.

The banner was entitled “Knot Bombs- Piecing Peace Together” and began, as grassroots work usually does, over tea and conversation, except it happened in a ‘virtual space’. Fatima, Sandy, Brenda, Joan and I thought about families and the effects of war – the trauma and PTSD of families that have lost loved ones – often on both sides of the weaponry, but not equally remembered and counted. We talked about commemoration, how moving on is not possible, and how being forgotten becomes a layer of loss and grief that cannot be shared. Our concern for the endless acceleration of military weapons spending, including weapons contracts to Saudi Arabia and the Lockheed Martin offices in Dartmouth always comes around to our responsibility to act and to include the human side of what the arms trade looks like. What is the true cost of military spending?

Let me share the words of two of the children who were in the market that day in August.

A 16-year-old boy working in a barbershop across the street from the bus told Human Rights Watch by phone from his hospital bed that the explosion was “like the flickering of a lamp, followed by dust and darkness.” He was wounded in the attack by metal fragments in his lower back and said he cannot move unassisted or walk to the bathroom.

A 13-year-old boy who was on the bus, who was also hospitalized, said he had a painful leg wound and hoped his leg would not be amputated. Many of his friends were killed.

We began the banner by contacting Aisha Jumaan of the Yemeni Relief and Reconstruction Foundation and peace activist extraordinaire Kathy Kelly and we were encouraged to continue with the project. Aisha has been in touch with the families in Yemen.

The 48+ border squares, 39 large feathers and over 30 small feathers have been sewn by community members from many groups including Nova Scotia Voice of Women for Peace, Halifax Raging Grannies, the Muslim Women’s Study Group, Immigrant and Migrant Women’s Association of Halifax, MMIWG Report reading group, Thousand Harbours Zen Sangha, Buddhist nuns and other faith based groups, National Board members of Voice of Women for Peace and friends from sea to sea to sea. Each of these women equally is an artist participant and Brenda Holoboff was the keeper of the banner and a dedicated key to completion!

Women who participated got together on zoom and our discussions included grieving and how to bring this banner into conversations to underscore our need for change in how we approach conflict. Margaret suggested we send the banner to Yemen after sharing it locally. Maria Jose and Joan mentioned displaying the banner at the university or library. I hope we can meet with women at the Masjid here to talk about this work. Maybe the journey will be across the country to libraries and shared public spaces where conversations will challenge the notion about ‘protection.’ If anyone is willing to help in this regard please let me know.

We must create better systems of care for one another. We need each other and this banner came together despite the obstacles of time and space.

All of the feathers and squares were stitched and shared by mail or dropped and picked up in mail boxes during the height of the pandemic. All of us were experiencing isolation and our own worries and missing family and friends. Joan and Brenda have been the pillars behind the work – creating the backing, sewing as the pieces came in and offering their creative expertise. The thank you go out to all the participants – women from BC, Alberta, Manitoba, Ontario Yukon, USA, Newfoundland, the Maritimes, and Guatemala. Mothers sewed with daughters, old friends said yes to the project and friends that may not have stitched directly on the banner rallied for completion.

But I want to mention particularly that when Fatima and I talked about the Arabic calligraphy for the feathers, she immediately responded that it would be no problem at all and within 3 days the names of the 38 lives were in my mailbox ready for transfer to the cloth. The Muslim women’s study group shared their stories on zoom in our scheduled meetings and those connections of the heart continue to be the hidden treasures of this work. As are the squares themselves – many women used cloth that had special meaning – scraps of cloth from baby blankets, maternity dresses, mother’s and sister’s clothes – even a girl guide uniform. All of these surround the names — names that were given to babies held in a mothers arms – Ahmed, Mohammad, Ali Hussein, Youseef, Hussein …

To remember all who have suffered and to remind those who live by the sword should heed the words of Toni Morrison that “Violence against violence- regardless of good and evil, right and wrong – is itself so foul that the sword of vengeance collapses in exhaustion or shame.” The death of these children is a shameful, grievable, shadow on all of us.

This project began in January 2021. In June flags were lowered and the call to find all unmarked Indigenous grave sites and to give children proper closure followed the discovery of the first 215 bodies of children in Kamloops. Members of the weekly reading group of MMIWG report have stitched many hearts with footprints that have been sewn on the covering that will hold the banner when it is not on display.

Let me leave you with this thought.
I believe we know something about repairing. This commemoration is a call for repairing harm that is done and even if we are unsure how to repair the harm, we do what we can where we can. Reparations and reconciliation is the repair work.

Recently, there was an online lecture given that is a preamble to a major conference for the 2023 Universities Studying Slavery conference, and in his brilliant lecture, Sir Hilary Beckles points out that the climate change discourse and the reparations discourse are two sides of the same coin. Both must push humanity to ‘its highest level of sophisticated performance’ as the essential fuel for change and the possibility of this systemic change – a change that has integrity cannot be achieved without reparations.

If we cannot repair the past we cannot prepare for the future.