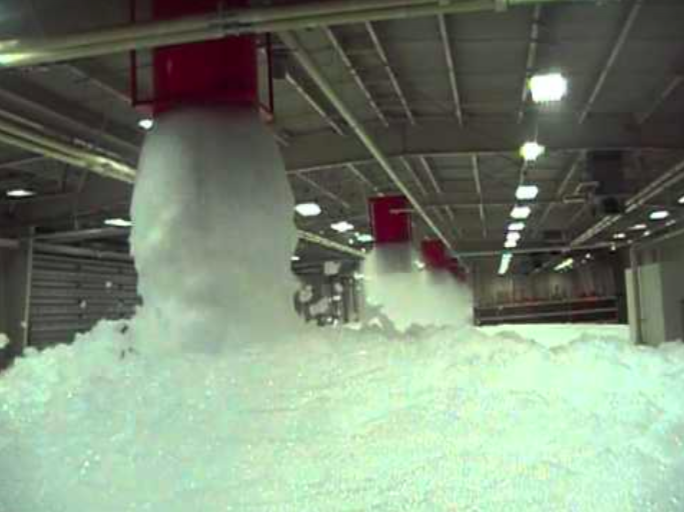 Ellsworth Air Force Base in South Dakota tests out its aqueous film-forming foam sprinkler system in an airport hangar.

The Office of Inspector General of the US Department of Defense announced last week it will review the Pentagon’s history of Per- and Poly Fluoroalkyl Substances (PFAS) that have leached into municipal drinking water wells near military bases across the country. The review will not examine the potential use of the carcinogens at 800 foreign US military bases.

The chemicals are widely used in firefighting foam. They are highly carcinogenic and extremely dangerous to public health.

The announcement comes after a request from Rep. Dan Kildee (D-Mich.) and others who demand to know “how long the military knew of the harmful side effects of PFAS, how DOD has communicated those risks to service members and their families who may have been exposed, and how DOD is formulating its plan to assess and solve the problem.”

We already have the answers to Kildee’s questions. The military has known PFAS is lethal since the early 70’s and perhaps earlier. What difference does it make how long they’ve been hiding this?  Instead, the federal government’s focus should be on diagnosing the sick and taking care of them, stopping the flow of contaminants, and providing clean water. Sadly, the DOD continues to contaminate drinking water supplies while the EPA is a non-actor.

People are dying in Colorado Springs and other military communities. Poor folks are living in shacks with wells close to the former England AFB in Alexandria, Louisiana where PFAS was found in the groundwater at 10.9 million ppt, while New Jersey limits the stuff in both groundwater and drinking water at 13 ppt.

Kildee wants to know how the DOD has communicated risks to service members and their families who may have been exposed. The simple answer is that the DOD didn’t communicate much of anything to anyone until 2016 or so, and today, most military members, dependents, and people living around bases still don’t have a clue. I know, I’ve talked to many across the country who had never equated the fire- fighting foam with the carcinogenic water they’re drinking.

Kildee wants to know the DOD’s plan to assess and solve the problem. So far, the DOD has been solving the problem its way – by producing and disseminating a steady flow of fake news. See my piece on the DOD’s PFAS propaganda campaign. The Pentagon is also relying on the legal exoneration inherent in claiming sovereign immunity while states sue for compensation for a long list of damages. The Pentagon is dependent on influential members of Congress like Sen.
John Barrasso and their chemical industry contributors to kick the can down the
road.  There, problem solved.

Kildee and fellow Michigan representatives Debbie Dingell (D-MI,) and Fred Upton introduced The PFAS Action Act of 2019 to classify all PFAS chemicals as hazardous substances under the Comprehensive Environmental Response, Compensation, and Liability Act, better known as Superfund. The law would require the EPA to designate PFAS chemicals as hazardous substances. This would be good for public health and the environment because it would force the DOD and
others to report releases and clean up the mess they’ve made.

Republicans in the Senate have come out against the PFAS Action Act, particularly because it regulates the entire class of PFAS chemicals and subjects their use to the Superfund law. House and Senate versions of the National Defense Authorization Act differ on these crucial points. We’ll see.

We can’t expect much from the Inspector General’s office, which has come under fire from Congress on multiple fronts, especially its handling of whistleblower reprisal investigations. The office handled 95,613 whistleblower complaints from 2013 to 2018.  Rep. Kildee is just one more.

We’re looking at a cleanup that may eclipse $100 Billion and the most powerful forces in the land are making sure it doesn’t happen. The Inspector General hopes to complete the evaluation by January. Don’t expect much.