US Executive Assault on Treaties Perils Peace and Constitution 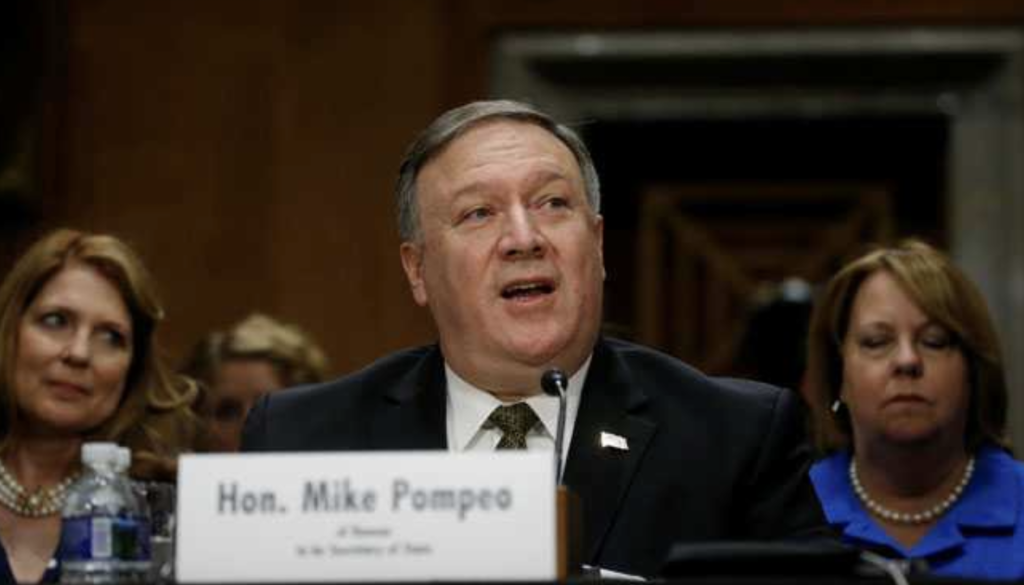 On February 1, Mr. Trump announced (through Secretary of State Mike Pompeo) that the U.S. would suspend its participation in the Intermediate-range Nuclear Forces Treaty (INF) with the Russians, effective next day. It pulls out after six months (August 2) unless Russia “complies” and scraps an offending missile. (Russia says U.S. missiles and unmanned vehicles are in violation. It followed the U.S. action by suspending its participation too.)

Presidents Ronald Reagan and Mikhail Gorbachev signed INF on Dec. 8, 1987. and the Senate approved it by a vote of 93 to 5 on May 27, 1988, It banned nuclear and conventional missiles, plus their launchers, with ranges between about 300 and 3,400 miles. It allowed Russia and the U.S. mutual inspection and eliminated nearly 2,700 missiles that could have sent some 4,000 nuclear warheads to take millions of lives, if not all human life.

Last December, Gorbachev and George Shultz, Reagan’s secretary of state and an INF negotiator, wrote jointly that quitting INF would lead to a new nuclear arms race, risking a war that threatened our existence. They felt sure  that meetings of military and diplomatic specialists could settle differences.

As though emboldened by the paucity of opposition to his INF action, Trump announced at the National Rifle Association’s annual meeting on April 26 in Indianapolis that he was giving up the Arms Trade Treaty.

Signed by President Obama — but, unlike INF, not voted on by the Senate —  it regulates exports of conventional weapons, with the aim of keeping them away from abusers of human rights. The UN General Assembly approved it in April 2013, Thus far, 101 nations have joined — but not the world’s leading arms merchant, the United States.

As for INF. it allows either “Party” to withdraw upon six months’ notice if it finds “extraordinary events related to the subject matter of this Treaty have jeopardized its supreme interests.” The notice must state what those “extraordinary events” are. A State Department news release hints that they are the production of “noncompliant” Russian missiles.

Latter-day courts have evaded their responsibility to say what the law is (as you will read below). But they have left the door open for Congress to assert its authority. Congress must use it or lose it.

The San Francisco–based War and Law League has proposed a House (and/or Senate) resolution declaring: (1) A president alone cannot repeal a treaty — or any other law. (2) Until a majority of both houses of Congress or two-thirds of the Senate votes to undo it, INF remains in effect.

While nonbinding (thus veto-proof), it would in essence tell Russia the U.S. is not united behind a nuclear arms race; caution Trump that executive hits on treaties will be resisted; and show courts that Congress asserts authority.

Unless Congress rebels or courts gain courage, these are a few major treaties related to war and peace that are in danger: the Chemical and Biological Weapons Conventions, the Nuclear Test Ban and Nonproliferation Treaties, The Hague and Geneva Conventions, and the Charters of the Organization of American States and the United Nations. Many more could fall. Trump has already withdrawn from agreements on climate, human rights, Iran, and other important matters.

What governments will eagerly negotiate serious business with the United States when they know that its executive can tear up any agreement?

Mr. Trump seemed to grasp the urgency of getting along with our nuclear peer, hence the Helsinki meeting. I suspect that the bipartisan anti-Russian furor that sprang up with the Mueller investigation together with the influence of the pugnacious Bolton and Pompeo drove the President to show that he could hate Russia with the best of them.

Instead of reverting to atomic anarchy, let him display his art of the deal and negotiate differences with the Russians on nuclear weapons. If President Reagan could do it, why can’t President Trump?

The U.S. Constitution says a president can make treaties with the “advice and consent” of the Senate, “provided two-thirds of the senators present concur” (Article 2, Section 2). It does not expressly mention termination of a treaty — or termination of any statute. But consider these facts:

Article 6 makes treaties part of federal law. (“This Constitution, and the laws of the United States … made in pursuance thereof; and all treaties made … under the authority of the United Sates shall be the supreme law of the land….”) And Article 2 requires a president to enforce the laws. (From its Section 3: “he shall take care that the laws be faithfully executed….” That means carried out, not killed.)

It should follow logically that executive repeal is unlawful. If you need more facts, bear in mind that repeal of a law requires another law. And only Congress legislates, according to Article 1. (Its first section begins, “All legislative powers herein granted shall be vested in a Congress of the United States….”)

In 1801, when Thomas Jefferson was vice-president, he wrote Manual of Senate Procedure, which said in part, “Treaties are legislative acts …. Treaties being declared, equally with the laws of the United States, to be the supreme law of the land, it is understood that an act of the legislature alone can declare them infringed and rescinded. This was accordingly the process in the case of France in 1798.”

The reference was to the French Treaties of 1788-1798, ended by an act of Congress (1 stat. 578, Act of July 7, 1798), signed by President John Adams. (It is among many historical incidents summarized in a War and Law League pamphlet, “Termination of Treaties.”) for 180 years, presidents and judges accepted the principle of congressional participation in treaty termination. The main difference of opinion was whether both houses or just the Senate needed to act.

James Madison, often called “Father of the Constitution,” appeared to be on the Senate side: “That the contracting parties can annul the treaty, cannot, I presume, be questioned; the same authority precisely being exercised in annulling as in making a Treaty.” (Letter to Edmund Pendleton, Jan. 2, 1791, The Papers of James Madison, v. 13, University Press of Virginia.

In 1796 Justice James Iredell differed somewhat in writing for the Supreme Court, “If Congress, therefore (who, I conceive, alone have such authority under our government), shall make such a declaration [that a treaty is vacated], I shall deem it my duty to regard the treaty as void….” (Ware v. Hylton, 3 U.s. 199, 260-61.)

In 1846 President Polk asked Congress for authority to withdraw from the Oregon Treaty with Britain. Congress obliged with a joint resolution. And in 1855, the Senate accepted a recommendation of President Pierce by adopting a resolution to terminate a commercial treaty with Denmark.

In 1876 President Grant wrote to Congress, “It is for the wisdom of Congress to determine whether the article of the treaty [with Britain] relating to extradition is to be any longer regarded as obligatory on the Government of the United States….” (Cited in 617 F. 2d 697, 726 [1979].)

Various court rulings in the 19th and 20th centuries contained statements like this one by Judge George W. Ray: “This treaty [of commerce and navigation with Italy] is the supreme law of the land, which Congress alone may abrogate, and the courts of the United States must respect and enforce it.” (Teti v. Consolidated Coal Co., 217 F. 443 [D.C. N.Y. 1914]).

A radical change came in December 1978 when President Jimmy Carter, in recognizing Communist China, announced U.S. withdrawal from a defense treaty with Taiwan without the approval of either house of Congress.

Senator Harry F. Byrd, Jr. (D-VA) thereupon introduced a resolution expressing the “sense of the Senate” that its OK be required to terminate any mutual defense treaty. Consequently the Senate Foreign Relations Committee conducted hearings on termination of treaties. Five law professors testified that a president could not end a treaty without congressional authorization.

Charles E. Rice, professor of constitutional law at Notre Dame University, denied that the framers would “unbalance this carefully crafted system [of making treaties] by giving the president a blank check” to nullify treaties. Rather they “intended that treaties would be repealed in a manner similar to statues, i.e. with legislative concurrence.” He suggested that an attempt to end a treaty without congressional approval be “an impeachable offense.”

Byrd said, “To hold that a president can nullify a treaty is to assign to the president the power unilaterally to set aside a law, because a treaty is a law…. The Senate could grant consent to the president’s ratification of a treaty … and within … weeks or months, a new president, newly elected, could undo that action.”

Senator Barry Goldwater (R-AZ) cited major defense and nuclear treaties that permitted a “Party” to withdraw after giving notice. He noted that the Senate was an integral element of the “Party” that approved them.

“Now, if ‘Party’ means ‘President,’ then any president will be able to wake up in the morning and decide, by himself, that the United states is withdrawing from any one of these important treaties without any power in Congress to stop him. That would be giving the president virtually a dictator’s powers.” He presented a table of 52 treaties ended by Congress.

Goldwater, eight other senators, and sixteen representatives sued the President. In Goldwater v. Carter, Judge Oliver Gasch of the U.S. District Court for the District of Columbia, ruled that termination of a treaty meant a repeal of the law of the land, therefore requiring congressional participation. (481 F. Supp. 949m 962-65, 1979).

The Constitution’s requirement that a treaty requires consent of two-thirds of the Senate reflects the Founding Fathers’ concern that no political branch possess unchecked power, Gasch wrote. Executive power to end treaties  “would be incompatible with our system of checks and balances.” He would permit termination by either (1) a majority of both houses, in accord with congressional authority to repeal any law, or (2) two-thirds of the Senate, like the treaty-making power.

Gasch had initially dismissed the case for lack of standing, but he reversed his decision when the Senate adopted Senator Byrd’s resolution as an amendment, 59-35. The vote shows “some congressional determination to participate in the process and clearly falls short of approving the President’s termination effort.”

Anyway, the DC Court of Appeals reversed Gasch’s ruling. Its own ruling was then “vacated” by the Supreme Court, which dismissed the case by 6-3 without deciding its merits. Justice Rehnquist and three other justices saw a “nonjusticiable political dispute that should be left for resolution by the Executive and Legislative Branches….” (444 U.S. at 1002, 1979.)

When President George W. Bush set aside the Anti-Ballistic Missile Limitation treaty of 1972, 33 U.S. representatives sued him in Kucinich v. Bush in 2002. DC District Judge John Bates found that the plaintiffs had no standing to sue and anyway the dispute needed settlement by the “political branches,” the courts possibly being a last resort. No one appealed.

Seventeen years later, the balance of powers becomes dangerously more unbalanced. The stage is set for the legislative branch —  or the judicial, if need be — to take the lead, while there’s still time.

Paul W. Lovinger is a San Francisco writer, reporter, and editor and the founder and (pro bono) secretary of the War and Law League.