US Conference of Mayors In Hawaii Delivers Resolution On Nuclear Weapons 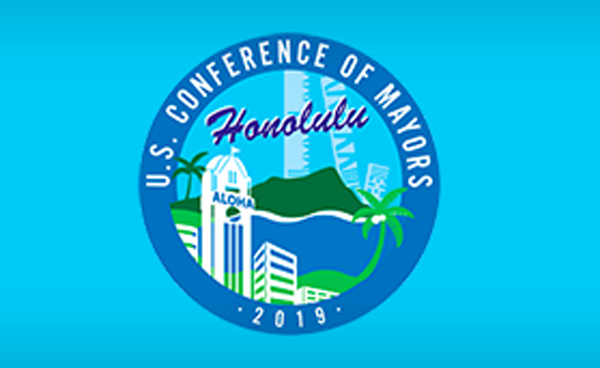 Resolution unanimously adopted by the U.S. Conference of Mayors, July 1, 2019 at its 87th Annual Meeting in Honolulu (www.usmayors.org)

CALLING ON ALL PRESIDENTIAL CANDIDATES TO MAKE KNOWN THEIR POSITIONS ON NUCLEAR WEAPONS AND TO PLEDGE U.S. GLOBAL LEADERSHIP IN PREVENTING NUCLEAR WAR, RETURNING TO DIPLOMACY, AND NEGOTIATING THE ELIMINATION OF NUCLEAR WEAPONS

WHEREAS, Renata Dwan, Director of the United Nations Institute for Disarmament Research, has declared that the risk of nuclear weapons being used again is at its highest since World War II, calling it an “urgent” issue that the world should take more seriously; and

WHEREAS, the U.S. announcement, followed by Russia’s, of their intention to withdraw

WHEREAS, nuclear weapons are the most devastating weapons ever created by humankind, with immense destructive capacity and trans-generational radiation effects; and

WHEREAS, nearly 14,000 nuclear weapons, 93 percent held by the U.S. and Russia, pose an intolerable threat to humanity and the biosphere; and from the Intermediate-Range Nuclear Forces (INF) Treaty effective in August 2019 are signs of deepening crisis among the nuclear-armed states; and

WHEREAS, following the 2002 U.S. withdrawal from the Anti-Ballistic Missile Treaty, collapse of the INF Treaty imperils the entire structure of arms control and disarmament, including prospects for extension of the New Strategic Arms Reduction Treaty (START) which expires in February 2021, and could lead to new, unpredictable arms racing; and

WHEREAS, the Nuclear Nonproliferation Treaty (NPT), which entered into force in 1970, requires the United States, Russia, the United Kingdom, France and China to negotiate “in good faith” the end of the nuclear arms race “at an early date” and the elimination of their nuclear arsenals; and

WHEREAS, nuclear-armed states are engaged in nuclear weapons modernization programs; and

WHEREAS, the Congressional Budget Office reports that U.S. spending for nuclear warheads, delivery systems and supporting infrastructure over the 2019 – 2028 period is projected to cost $494 billion, for an average of nearly $50 billion a year; and

WHEREAS, notwithstanding the U.S. commitment to support immediate negotiation and early entry into force of a Comprehensive Nuclear Test Ban Treaty (CTBT) made in connection with the 1995 indefinite extension of the NPT and subsequent review conferences, the 2018 Nuclear Posture Review explicitly states that the Administration will not seek Senate approval of the CTBT; and

WHEREAS, over the objection of and without participation by the United States, Russia and the other nuclear-armed states, 122 countries – compelled by the unacceptable humanitarian consequences of any nuclear weapons use – in 2017 adopted and opened for signature a historic treaty to prohibit the possession, development, testing, use and threat of use of nuclear weapons, the Treaty on the Prohibition of Nuclear Weapons; and

WHEREAS, Mayors for Peace is working for a world without nuclear weapons and safe and resilient cities as essential measures for the achievement of lasting world peace, and has grown to 7,756 cities in 163 countries and regions, with 215 U.S. members; and

WHEREAS, the United States Conference of Mayors (USCM) has unanimously adopted Mayors for Peace resolutions for 14 consecutive years, on June 11, 2018 calling on the Administration and Congress to “step back from the brink and exercise global leadership in preventing nuclear war.”

NOW, THEREFORE BE IT RESOLVED, that the USCM calls on all Presidential candidates of all political parties to make known their positions on nuclear weapons and to make preventing nuclear war, returning to diplomacy, and commencing negotiations on the global elimination of nuclear weapons priority issues in the 2020 Presidential campaign; and

BE IT FURTHER RESOLVED, that the USCM calls on all Presidential candidates to pledge their support for the joint 1985 declaration by U.S. President Ronald Reagan and Soviet President Mikhail Gorbachev, that “a nuclear war cannot be won and must never be fought,” as urged by United Nations Secretary- General António Guterres; and

BE IT FURTHER RESOLVED, that the USCM calls on all Presidential candidates to pledge, if elected, to lead a global effort to prevent nuclear war by renouncing the option of using nuclear weapons first and by actively pursuing a verifiable agreement among nuclear-armed states to eliminate their nuclear arsenals; and

BE IT FURTHER RESOLVED, that the USCM calls on all Presidential candidates to pledge, if elected, as an urgent priority, to lower nuclear tensions with Russia through intensive diplomatic efforts, including negotiations to replace the INF Treaty and to extend or replace New START; and

BE IT FURTHER RESOLVED, that the USCM calls on all Presidential candidates to pledge, if elected, to promptly seek Senate approval of the Comprehensive Nuclear Test Ban Treaty; and

BE IT FURTHER RESOLVED, that the USCM calls on all Presidential candidates to pledge, if elected, to reverse U.S. opposition to the Treaty on the Prohibition of Nuclear Weapons and to embrace its humanitarian values and goals; and

BE IT FURTHER RESOLVED, that the USCM urges all U.S. mayors to join Mayors for Peace to help reach the goal of 10,000 member cities by 2020, and encourages all USCM members to call on all Presidential candidates to make known their positions on nuclear weapons and to pledge U.S. global leadership in preventing nuclear war, returning to diplomacy, and negotiating the elimination of nuclear weapons.