The U.S. military is buying thousands of skis for the U.S. Marine Corps to enhance its preparedness for cold weather operations as tensions grow with Russia and North Korea—countries known for having brutal winters.

The Marine Corps is spending $7 million on the winter equipment—a total of 2,648 sets of new skis, boots and binding for scout snipers, reconnaissance Marines and infantry Marines, Military Times reported Friday. This move is reportedly due to the fact the old skis were breaking. Marines stationed with the rotational force in Norway, deployed to the country back in January, will be the first to receive the new skis.

There are currently roughly 300 Marines in the Scandinavian country—a fact that has provoked ire from Russia, which shares a border with Norway. When plans to send the Marines to Norway were announced last year in October, Russia swiftly decried the decision. At the time, the Russian embassy in Oslo told Reuters, “Taking into account multiple statements of Norwegian officials about the absence of threat from Russia to Norway we would like to understand for what purposes is Norway so…willing to increase its military potential, in particular through stationing of American forces in Vaernes?”

As Russia has become increasingly aggressive across Europe, engaging in conflicts from Georgia to Ukraine (and annexing Crimea), the U.S. military has sought to modernize its forces in the region. The U.S. has also butted heads with Russia over their competing roles in the conflict in Syria.

On Christmas, Robert Neller, a four-star who currently serves as the 37th commandant of the Marine Corps, visited the U.S. Marines stationed in Norway and told them they should be prepared for a “big-ass fight.” “I hope I’m wrong, but there’s a war coming. You’re in a fight here, an informational fight, a political fight, by your presence,” Neller said.

Beyond Russia, the U.S. is also clashing with North Korea over its nuclear program. The rogue state has conducted a slew of long-range missile tests in 2017, prompting condemnation from the international community, harsh economic sanctions and a rhetorical battle between President Donald Trump and North Korean leader Kim Jong Un. None of this has stopped the U.S. from continuing military exercises on the Korean Peninsula. 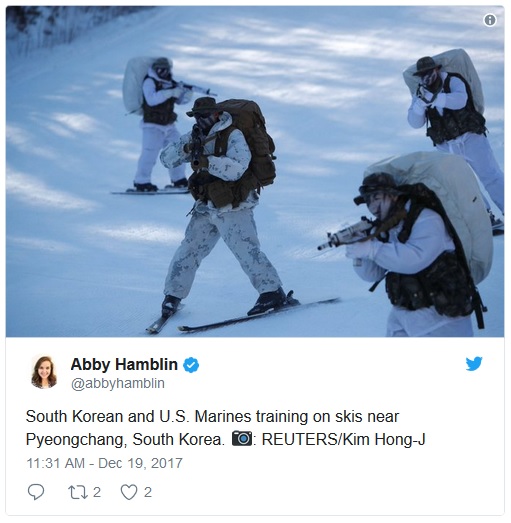 Seoul recently asked the U.S. if it would consider delaying next year’s joint military exercises, typically held in March but not yet scheduled, until after the Winter Olympics, in an effort to avoid provoking North Korea as the South hosts countries from around the world. The U.S. government is reviewing the proposal, The Washington Post reports.