The Tyranny of Contamination: The US Military is poisoning Okinawa.

High concentrations of the deadly compounds Per-fluoro-octane sulfonate (PFOS) and Per-fluoro-octanoic acid (PFOA), together known as Per- and polyfluoroalkyl substances (PFAS) have been found in the drinking water in communities adjacent to the U.S. Air Force’s Kadena Air Base and the U.S. Marine Corps Air Station Futenma in the Japanese Prefecture of Okinawa. The chemicals are found in the fire-fighting foam used in routine fire-training exercises on base.

The health effects of exposure to these chemicals include frequent miscarriages and other severe pregnancy complications. They contaminate human breast milk and sicken breast-feeding babies. PFAS contribute to liver damage, kidney cancer, high cholesterol, decreased response to vaccines, an increased risk of thyroid disease, along with testicular cancer, micro-penis, and low sperm count in males. 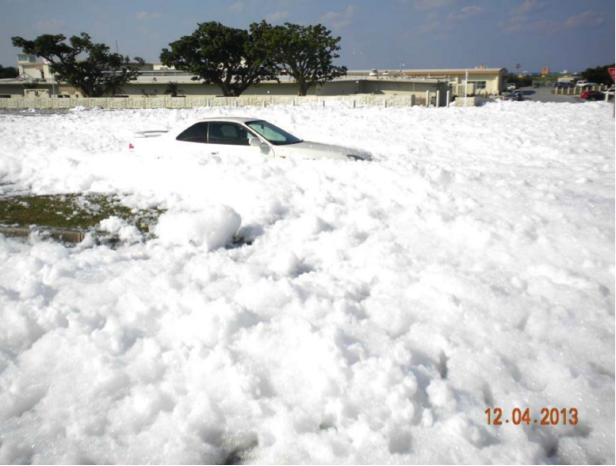 Researchers at the Harvard T.H. Chan School of Public Health say that an approximate safe dose of PFOS and PFOA in drinking water is 1 ppt.

Meanwhile, municipal water systems in Okinawa have been shown to contain more than one hundred times that level, while ground water is contaminated at a level one thousand times higher. The contamination is not confined to Okinawa. For instance, groundwater at China Lake, California was recently tested at 8 million ppt, according to a little-known report by the DOD. Although few in America who live adjacent to military bases are aware of the contamination, the situation is different in Okinawa, where researchers and activists have been sounding the alarm.

The Okinawans are speaking to us.

The EPA’s combined Lifetime Health Advisory (LHA) limit for both chemicals is 70 ppt, while a growing chorus in the scientific community that aims to protect public health say that 70 ppt is exceedingly high. Bowing to chemical industry pressure, the EPA still does not regulate PFAS. In fact, in early 2018, Scott Pruitt’s EPA and the White House frantically sought to block publication of a federal health study on PFAS, after one Trump administration aide warned it would cause a “public relations nightmare.” 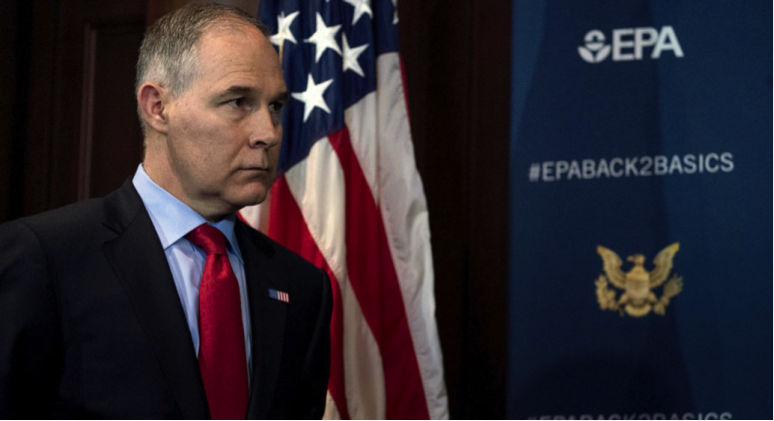 Scott Pruitt represented the chemical industry while people around the world
suffered from chemical contamination caused by the US military.
Nothing has changed since Pruitt’s departure.

New toxicological profiles released in June of 2018 by the Agency for Toxic Substances and Disease Registry (ATSDR) has set lifetime drinking water levels of 11 ppt for PFOA and 7 ppt for PFOS.

Okinawan authorities, who represent communities straddling the bases, have been recently denied access to the source of the ongoing contamination. The Japan-U.S. Status of Forces Agreement (SOFA) does not give Japanese authorities access to US bases, preventing them from investigating sources of such contamination. The SOFA states, “Within the facilities and areas, the United States may take all the measures necessary for their establishment, operation, safeguarding and control.”

The SOFA agreement differs from those in force in European nations like Germany, where local authorities are allowed to enter bases. According to Japan’s SOFA, Japanese officials may not conduct investigations without US consent. In Germany they can.

The refusal of the US military to allow Japan’s officials access to the bases demonstrates that the Japan-U.S. Status of Forces Agreement hinders Japanese officials from properly addressing problems caused by the bases. No wonder most Okinawans and many Japanese oppose new military base construction.

Disregarding domestic and international laws and the Okinawa Prefectural Government’s cancellation of the permit for reclamation works, the compliant Japanese government has just started construction on a massive US airstrip on the beautiful Oura Bay in Henoko. 80% of the Okinawan people oppose the construction. Accordingly, they demonstrated their opposition by electing Governor Denny Tamaki in September of 2018. Like his predecessor Takeshi Onaga, Governor Tamaki has said “No!” to Tokyo. Tokyo’s actions against Tamaki and his government are “discriminatory, undemocratic and even illegal,” in the words of Okinawa affairs expert Gavan McCormack.

Exactly how much Tamaki is going to resist Tokyo and Washington remains to be seen. Although he is opposed to the Henoko project, Tamaki has declared his general support for shared Japanese-American military bases.

For generations, Okinawans have demanded the closure of U.S. Marine Corps Air Station Futenma and for 20 years have opposed the idea of replacing Futenma with a new base in Henoko. Futenma is an abomination, disturbingly located in the center of densely populated Ginowan. Residents nearby have been terrorized by the US presence. Their eardrums have been split. They have been raped and poisoned and held captive in their own land. Many Okinawans view the Japanese government and the US as occupying forces. Okinawa accounts for less than one percent of Japan’s total land area but hosts more than half of the approximately 47,000 American military personnel stationed in Japan. 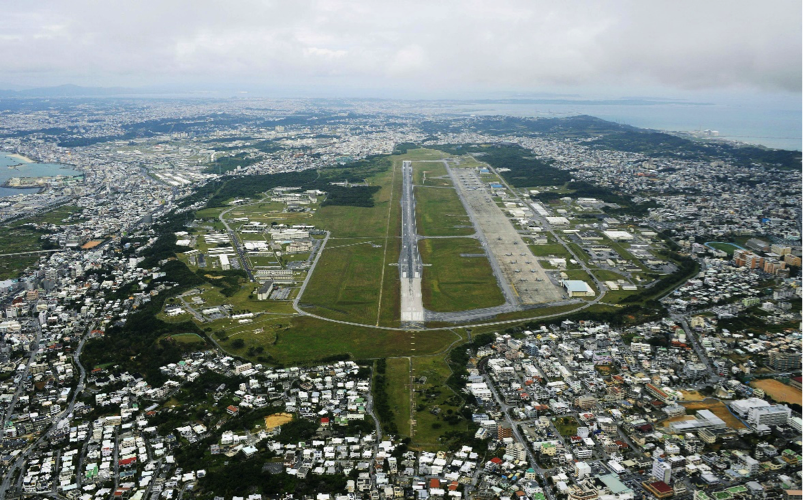 Instead of closing the base, the American overlords have decided to build a new base 35 miles north, in Henoko, while abandoning seriously contaminated Futenma. Governor Tamaki is appealing to the world, “Without solving issues related to democracy in Okinawa, the US-Japan security alliance is going to be very, very vulnerable.”

The Governor has called for Okinawa to hold a referendum on February 24, 2019 over the move to relatively unspoiled Henoko. The vast majority of islanders want the US military to leave permanently and immediately—and they want the US to clean up the mess they’ve made. A widely circulated petition to President Trump demands the cessation of work on Henoko until the referendum is held.

The Numbers on PFAS Contamination 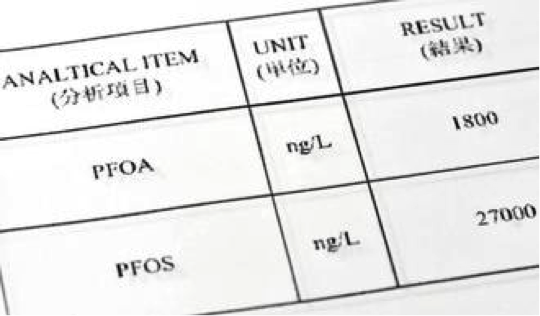 In November 2018, Okinawa Prefectural Government officials reported that 2,000 ppt of the chemicals were detected at the Chunnagā Spring Water Site (Wakimizu Chunnagā) in Kiyuna, Ginowan City. 1,300 ppt of the compounds were discovered at the same site during the summer, 2016 survey. 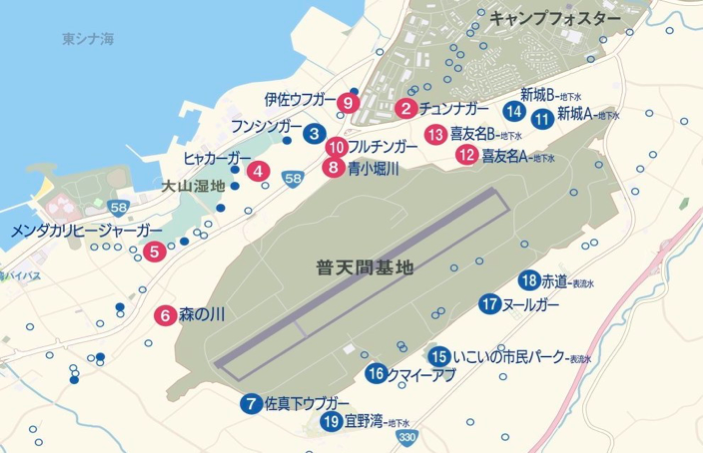 The Chatan plant supplies water to Chatan Town, Okinawa City, Kitanakagusuku Village, Nakagusuku Village, Urasoe City, and Naha City. In 2015, the water at the Chatan Water Treatment Plant measured up to 120 ppt for PFAS, exceeding EPA guidelines. Furthermore, the Dakujakugawa River that runs through the base was found to contain 1,379 ppt of PFAS.

Groundwater containing PFAS near the base has been detected at these levels:

The topography is such that polluted Ginowan City is lower on the ocean side, (northwest) of the Futenma Airbase, so the rain that falls throughout the area and on the runway contaminates this side much more than the communities on higher ground straddling Route 330 on the southeast side of the base. This scenario is common in vulnerable communities adjacent to US airbases around the world.

The relatively porous limestone soil found throughout Okinawa allows the contamination to spread over large areas.

When the Okinawa Defense Bureau approached US military officials to discuss these findings and other issues, the US military rejected the meeting, saying the aqueous fire-fighting foam with PFAS are not regulated substances. The US military is correct. The EPA, despite a worldwide firestorm of controversy, continues to allow their use. Reining in these substances and admitting their destructive impact might unleash a flood of lawsuits and unrest worldwide.

Okinawa Prefecture has installed a carbon filtration system at the Chatan Water Treatment Plant at a cost of $1.5 million in an attempt to remove PFAS from drinking water. Constructing an entirely new system would have been better for public health. The US military did not offer to pay for the costs of addressing the contamination at Chatan. The military has also dodged financial responsibility for PFAS contamination in communities near bases in the US. The DOD’s policy is to deny responsibility and refuse payment for new water systems.

Of course, PFAS contamination is only part of the US military legacy of contamination in Okinawa. Following is a brief rundown of the toxic cocktail the US has bequeathed to Okinawa over the years. Many of these chemicals take generations or longer to break down.

In 2015, after a protracted FOIA process, the Pentagon released records detailing high levels of contamination on Camp Kinser land that was scheduled for return to civilian use. 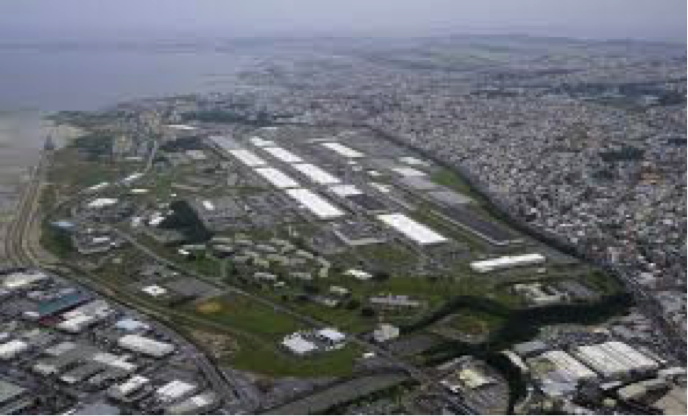 Camp Kinser includes a 46,000 sq.-meter highly-contaminated outdoor chemical storage area located on the southern shoreline of the installation. “Retrograde shipments from Vietnam,” including insecticides, herbicides, and solvents were stored there. Washington has announced plans to return most of Camp Kinser by 2024. However, the return of a 5-acre parcel of land near the base of Gate 5 missed its scheduled 2014 return date. That land appears to be located within—and adjacent to—the contaminated zone.

According to the FOIA, massive quantities of neutralized Cyanide compounds, inorganic acids, alkalis, and 12.5 tons of Ferric Chloride were buried or “flushed” on the base.

The US has also left behind Arsenic, Depleted Uranium, Nerve Agents, and Hexavalent Chromium.

The Pentagon evades responsibility for the damage its bases cause.

Massive amounts of pesticides were buried at Camp Hansen in the town of Kin.

Japanese officials are demanding that the US follow EPA guidelines for remediation before returning the land and the beaches to civilian uses. The US has yet to release any comment on the contamination.

The FOIA-released documents appear to corroborate the accounts of the hundreds of US veterans who claim they were sickened by dioxin-tainted defoliants—including Agent Orange—in Okinawa.

If the Henoko base is completed it will spoil another beautiful area of Okinawa – the way communities surrounding Futenma, Kadena, and Kinser have been contaminated. After three quarters of a century of being occupied by a foreign military, this fresh assault on Okinawa must be halted.

Okinawan and American activists will hold a hold a rally in front of the White House on Jan. 7th from 11:00 am to Noon to put pressure on President Trump’s administration to intervene in the Henoko construction. Japan Times has reported that the protest is being organized by Robert Kajiwara, an Hawaiian-Okinawan who started the Henoko petition, “We want to send a message to Washington, D.C.,” Kajiwara said. “We are hoping President Trump will take the issue at Henoko seriously and we hope he will order at least a temporary halt on the landfill until the referendum.”

Special thanks to Joseph Essertier, Associate Professor, Nagoya Institute of Technology and Coordinator of Japan for a World BEYOND War. Some of the findings in this article are based on the research of Jon Mitchell, a British journalist and author based in Japan and of Masami Kawamura of the Okinawa-based Informed-Public Project, a research organization focusing on environmental issues.