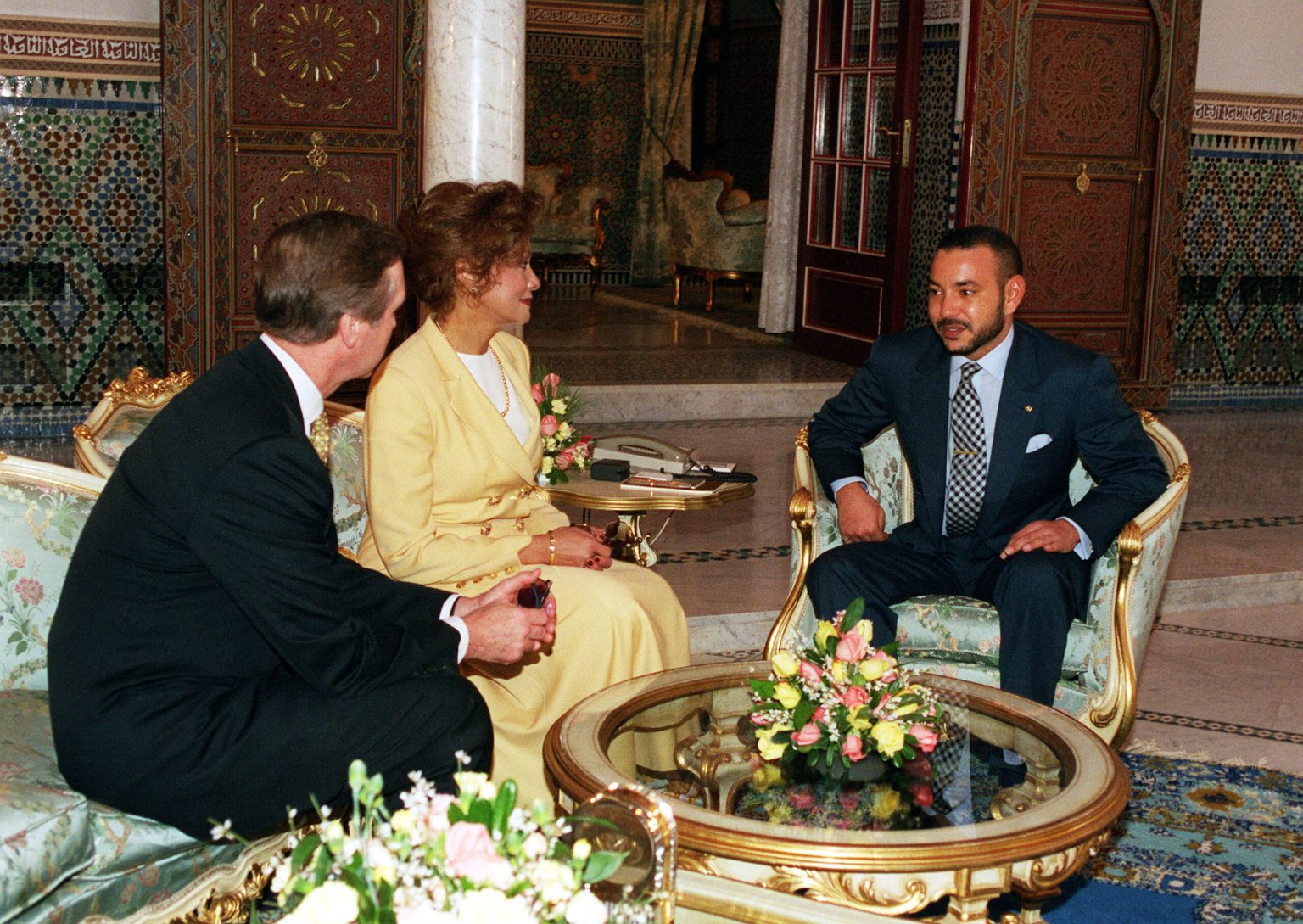 Secretary of Defense William S. Cohen (left) and his wife Janet Langhart Cohen (center) meet with King Mohammed VI, of Morocco, at his palace in Marrakech, on Feb. 11, 2000. Cohen and the King agreed to open an expanded security and defense dialogue, and discussed ways that Morocco could expand its leadership role in promoting regional stability in the Mediterranean and on the African continent. DoD photo by R. D. Ward.

I’m not misusing the word “war” to mean something like the war on Christmas or drugs or some TV pundit whom somebody else insulted. I mean war. There is a new U.S. war in Western Sahara, being waged by Morocco with the support of the U.S. military. The U.S. military, unbeknownst to most people in the United States — it’s perfectly knowable but few give a damn — arms and trains and funds the militaries of the world, including almost all of the most brutal governments of the world. I can’t compare this with the outrage in the U.S. media over the U.S. government feeding a few hungry people in the United States, because there isn’t any outrage over it at all. One of the people the U.S. military backs is:

His Majesty the King Mohammed the Sixth, Commander of the Faithful, May God Grant Him Victory, of Morocco

Yes, that’s his name. King Mohammed VI became king in 1999, which seems to have been a banner year for new dictators. This King had the unusual qualifications for the job of his father dying and his own heart beating — oh, and being a descendant of Muhammad. The King is divorced. He travels the world taking more selfies than Elizabeth Warren, including with U.S. presidents and British royalty.

May God Grant Him Victory’s education included studying in Brussels with then-President of the European Commission Jacques Delors, and studying at the French University of Nice Sophia Antipolis. In 1994 he became Commander in Chief of the Royal Moroccan Army.

The King and his family and government are famously corrupt, with some of that corruption having been exposed by WikiLeaks and The Guardian. As of 2015, Commander of the Faithful was listed by Forbes as the fifth richest person in Africa, with $5.7 billion.

The U.S. State Department in 2018 noted that “[h]uman rights issues included allegations of torture by some members of the security forces, although the government condemned the practice and made substantial efforts to investigate and address any reports; allegations that there were political prisoners; undue limits on freedom of expression, including criminalization of libel and certain content that criticized Islam, the monarchy, and the government’s position regarding territorial integrity; limits on freedom of assembly and association; corruption; and criminalization of lesbian, gay, bisexual, transgender, or intersex (LGBTI) conduct.”