$740 billion. That’s how much Congress is on track to approve for the defense budget in 2021. In the middle of a pandemic, as millions of Americans face unemployment, evictions, and a broken healthcare system.

In 2020, the defense budget was 90 times the size of the budget of the Centers for Disease Control and Prevention (CDC). Now, we face a pandemic with a lack of resources, no nationwide testing plan, 3.6 million cases and over 138,000 deaths. Maybe, just maybe, we could have been better prepared for this disaster if the budget for our public health agency wasn’t about 1 percent of the defense budget.

On Tuesday, Congress will vote on the National Defense Authorization Act (NDAA), but before that, they will vote on my amendment with Congresswoman Barbara Lee and Senator Bernie Sanders to cut the bloated defense budget by 10 percent.

We have a choice. We can ignore the systemic problems that this pandemic has brought to the surface, continue with businesses as usual and rubber stamp a $740 billion giveaway to defense contractors. Or we can listen to the American people and save $74 billion towards their urgent needs—housing, healthcare, education and more.

In Data for Progress’ latest poll, the majority of American voters want us to put their needs over the profits of Lockheed Martin, Raytheon and Boeing. Fifty-six percent of voters support cutting the defense budget by 10 percent to pay for priorities like fighting the coronavirus, education, healthcare & housing—including 50 percent of Republicans. 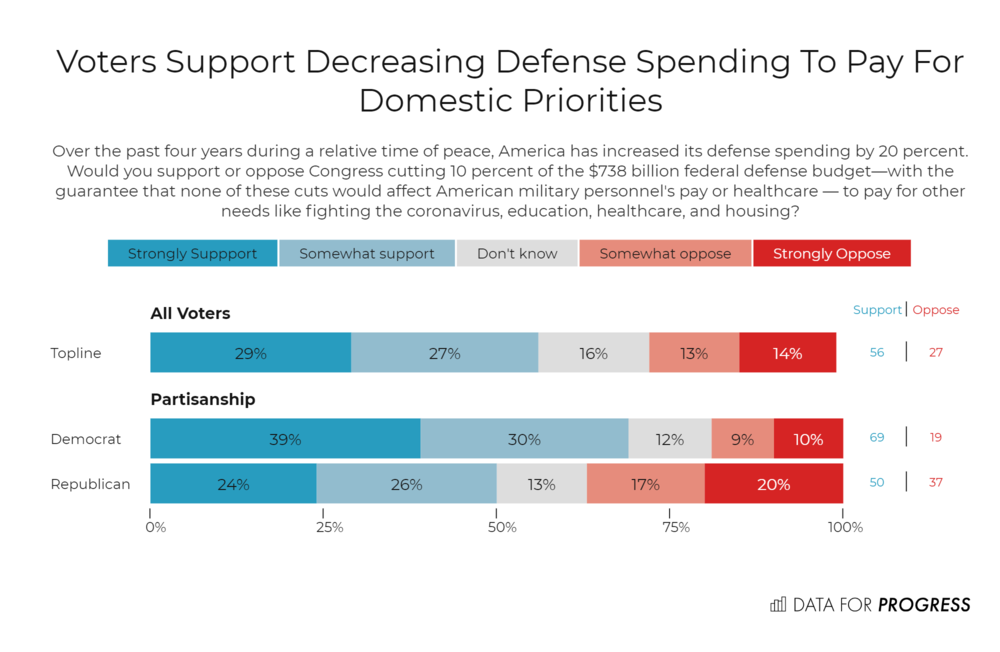 Fifty-seven percent of voters supported cutting the defense budget by 10 percent if funding was reallocated to the CDC and other more pressing domestic needs. Only 25 percent of people opposed the cut, that means more than twice as many people support an over $70 billion cut to our defense budget than don’t, a 2:1 ratio. 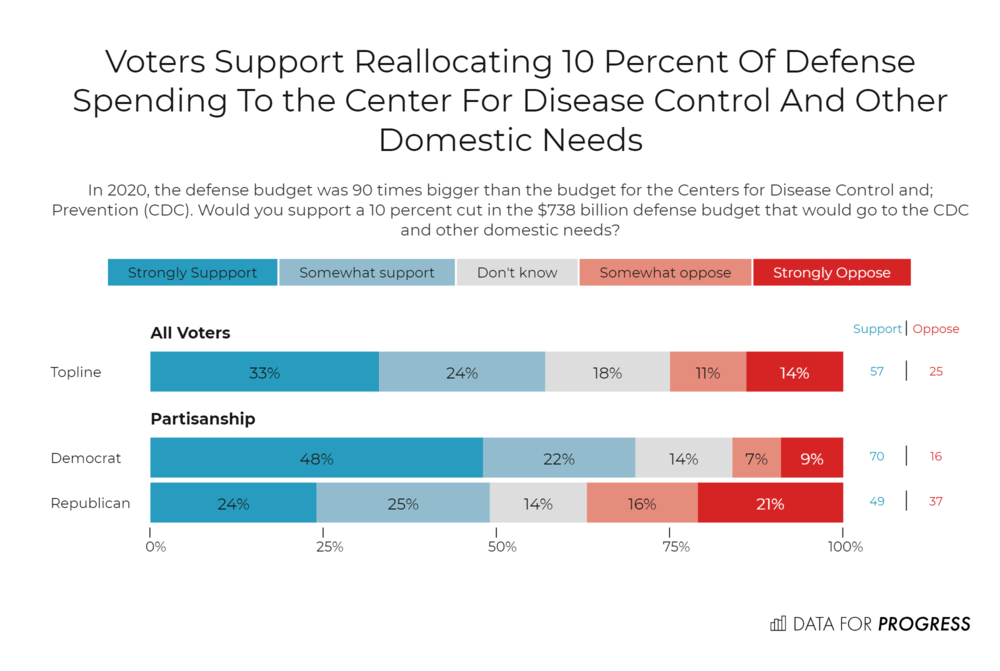 The polling is abundantly clear: the American people know that new nukes, cruise missiles, or F-35s won’t help them get their next unemployment check, or pay next month’s rent, or put food on their family’s table, or pay for the costs of healthcare in a global pandemic.

Over the past four years, during a time of relative peace, America has increased its defense spending by 20 percent, over $100 billion. There is no other part of the Congressionally-appropriated federal budget that has increased by this much—not education, not housing, and not public health.

We have seen the effects of supporting this endless cycle of exponential defense spending. In January, President Trump’s unilateral assassination of Iranian General Hassan Soleimani almost led us down the path of another endless war. In the last month, we have seen the President order military responses to civilian protestors in Lafayette Park so he could hold a photo-op and we have seen Department of Homeland Security agents swarm the city of Portland assaulting and arresting protesters.

The Pentagon’s bloated budget incentivizes people like President Trump to threaten wars abroad and unleash militarized troops on our own people. The American public has seen this firsthand and this new poll clearly shows that they are fed up.

Our nation is facing a pandemic that has killed more American people than the Iraq War, the Afghanistan War, 9/11, the Persian Gulf War, the Vietnam War and the Korean War combined. Yet, despite the coronavirus clearly being the greatest threat to our nation currently, Congress is instead about to authorize and appropriate more money for defense spending than anything else.

Tomorrow, you will likely hear some Republicans say that our amendment to cut 10 percent from this budget is another attack from the “leftist mob” in Congress, that we want to undermine this country’s safety. We think America is only as safe as its people at home feel, and right now with rampant unemployment, millions losing healthcare, underfunded education, and families facing eviction—the American people need our help.

So often, as progressive members of Congress, we try to explain to our Democratic and Republican colleagues that the American people are more progressive than they think. We point to polls showing overwhelming support for Medicare for All, for a Green New Deal or a $15 minimum wage. Progressive values are mainstream values, because progressive values put people first.

That’s why a majority of Americans support cutting our excessively large defense budget—because they no longer see their values or needs reflected in the actions of the Pentagon. Now it’s up to us, the people they elected to represent their interests, to hear them and take action.

Tomorrow, Congress can choose—the American people or not.

Mark Pocan (@repmarkpocan) is a Congressman representing Wisconsin’s Second Congressional District. He is the co-chair of the Congressional Progressive Caucus.

Methodology: From July 15 through July 16, 2020, Data for Progress conducted a survey of 1,235 likely voters nationally using web-panel respondents. The sample was weighted to be representative of likely voters by age, gender, education, race, and voting history. The survey was conducted in English. The margin of error is +/- 2.8 percentage points.