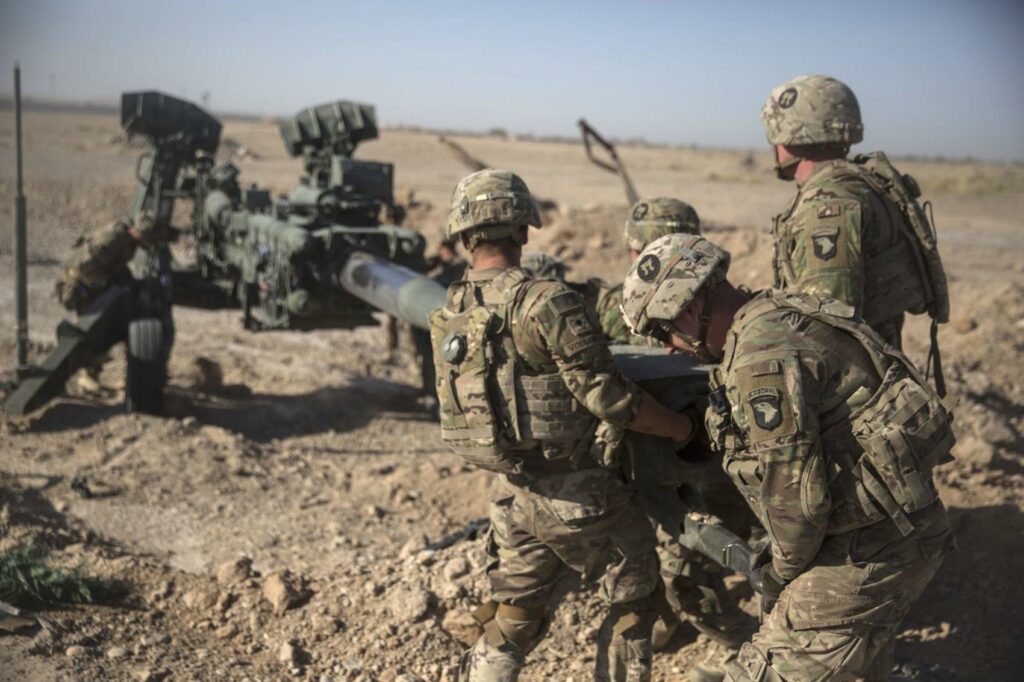 The Richmond (Va.) Times Dispatch recently published an editorial, republished by other papers with the headline: “Remembering why we still fight in Afghanistan.” It’s a rather striking piece of writing, because it does not even attempt to offer a single reason why anyone would “fight” in Afghanistan. The headline, however, suggests that someone is still waging war there because of something they’ve forgotten and can be reminded of. Given that the top killer of U.S. troops who have participated in that war has been suicide, one is tempted to shout “Get on with the reminding already!” But then one has to wonder: reminding of what?

The first few paragraphs of the editorial simply tell us that 17 years have gone by. Then we come to this:

In fact, the U.S. military now has approximately 11,000 U.S. troops in Afghanistan, plus 4,000 more that Trump sent plus 7,148 other NATO troops, 1,000 mercenaries, and another 26,000 contractors (of whom about 8,000 are from the United States). That’s 48,000 people engaged in a foreign occupation of a country 17 years after the accomplishment of their stated mission to overthrow the Taliban government.

Next in the editorial comes this:

“Most Americans, however, have little idea what we’re doing there. Many Americans probably do not even realize that there are still Americans deployed there.”

Most people in the United States have heard no convincing reason why the U.S. military is in Afghanistan, and many don’t even know it is there.

When you say it like that, so that I am not somehow magically there myself, I feel more open to urging the U.S. military — an entity that exists separately from me — to get out of there.

“The Virginia War Memorial hopes to change that. For 20 years, the memorial has produced a series of short documentary films called ‘Virginians at War’ to preserve history and educate future generations. On September 11 this year, the memorial released its newest film, ‘A New Century, A New War,’ focusing on the terrorist attacks and the ensuing wars. The documentary was created in response to requests from Virginia teachers searching for tools to introduce the difficult and important subjects of 9/11 and our long wars in Afghanistan and Iraq.”

If you look up “the Virginia War Memorial,” you find an institution promoting such initiatives as “Little Soldier Saturdays” with pro-war activities for children aged 3-8. But you don’t find any explanation of why wars in general or the war on Afghanistan in particular are justified. Nor have they made their film available; so no readers of this editorial are able to watch it, and the editorial does not convey any explanation of the war that might be found in the film. Instead, the Times Dispatch tells us:

“Twenty interviews were conducted with Virginia veterans and with family members of those lost in the Pentagon attack. From these interviews, a moving and informative film was created that presents vivid memories from 9/11 and shows the personal costs of the wars. ‘A New Century, A New War,’ was created to show how the world changed in one day and how Virginians have lived and served in this new environment. Clay Mountcastle, director of the War Memorial, explains: ‘We wanted a film that would convey the full spectrum of feelings surrounding 9/11, and the weeks and months after, to those too young to have experienced it themselves. We also tried to capture the complex nature of serving in a prolonged war with several lessons and meanings.’ The War Memorial hopes the film will remind Virginians about this critical chapter in history and provide an invaluable reference tool for classrooms. ‘A New Century, A New War’ will soon be available for viewing at the Virginia War Memorial and distributed to teachers across the state. Go see it. It’s well worth the visit and the viewing.”

And that’s it. So, one is left simply to assume that because “9/11” happened, war on Afghanistan is justified until the end of times or until Jesus gets back (has anyone even explained where he went or checked on whether he’s stuck in traffic?). And the “full spectrum of feelings surrounding 9/11” I’m willing to bet you one ten-billionth of a Pentagon budget does not include the feelings of any of the survivors and loved ones who have been pleading for 17 years that their suffering not be turned into propaganda for war.

The Richmond Times-Dispatch is not alone. Almost everybody avoids trying to make a case for pointless endless war. Even the people put in charge of waging it have a habit of proposing that it end. Typically they do this the week after they retire or get reassigned.

Here’s a case for ending U.S. participation in that war, in the form of part of a public letter to President Trump that thousands of people have signed and everyone is invited to sign:

During each of the past 17 years, our government in Washington has informed us that success was imminent. During each of the past 17 years, Afghanistan has continued its descent into poverty, violence, environmental degradation, and instability. The withdrawal of U.S. and NATO troops would send a signal to the world, and to the people of Afghanistan, that the time has come to try a different approach, something other than more troops and weaponry.

The ambassador from the U.S.-brokered and funded Afghan Unity government has reportedly told you that maintaining U.S. involvement in Afghanistan is “as urgent as it was on Sept. 11, 2001.” There’s no reason to believe he won’t tell you that for the next two years, even though John Kerry tells us “Afghanistan now has a well-trained armed force …meeting the challenge posed by the Taliban and other terrorists groups.” But involvement need not take its current form.

The United States is spending $4 million an hour on planes, drones, bombs, guns, and over-priced contractors in a country that needs food and agricultural equipment, much of which could be provided by U.S. businesses. Thus far, the United States has spent an outrageous $783 billion with virtually nothing to show for it except the death of thousands of U.S. soldiers , and the death, injury and displacement of millions of Afghans. The Afghanistan War has been and will continue to be, as long as it lasts, a steady source of scandalous stories of fraud and waste. Even as an investment in the U.S. economy this war has been a bust.

But the war has had a substantial impact on our security: it has endangered us. Before Faisal Shahzad tried to blow up a car in Times Square, he had tried to join the war against the United States in Afghanistan. In numerous other incidents, terrorists targeting the United States have stated their motives as including revenge for the U.S. war in Afghanistan, along with other U.S. wars in the region. There is no reason to imagine this will change.

In addition, Afghanistan is the one nation where the United States is engaged in major warfare with a country that is a member of the International Criminal Court. That body has now announced that it is investigating possible prosecutions for U.S. crimes in Afghanistan. Over the past 17 years, we have been treated to an almost routine repetition of scandals: hunting children from helicopters, blowing up hospitals with drones, urinating on corpses — all fueling anti-U.S. propaganda, all brutalizing and shaming the United States.

Ordering young American men and women into a kill-or-die mission that was accomplished 17 years ago is a lot to ask. Expecting them to believe in that mission is too much. That fact may help explain this one: the top killer of U.S. troops in Afghanistan is suicide. The second highest killer of American military is green on blue, or the Afghan youth who the U.S. is training are turning their weapons on their trainers! You yourself recognized this, saying: “Let’s get out of Afghanistan. Our troops are being killed by the Afghans we train and we waste billions there. Nonsense! Rebuild the USA.”

The withdrawal of U.S. troops would also be good for the Afghan people, as the presence of foreign soldiers has been an obstacle to peace talks. The Afghans themselves have to determine their future, and will only be able to do so once there is an end to foreign intervention.

We urge you to turn the page on this catastrophic military intervention. Bring all U.S. troops home from Afghanistan. Cease U.S. airstrikes and instead, for a fraction of the cost, help the Afghans with food, shelter, and agricultural equipment. 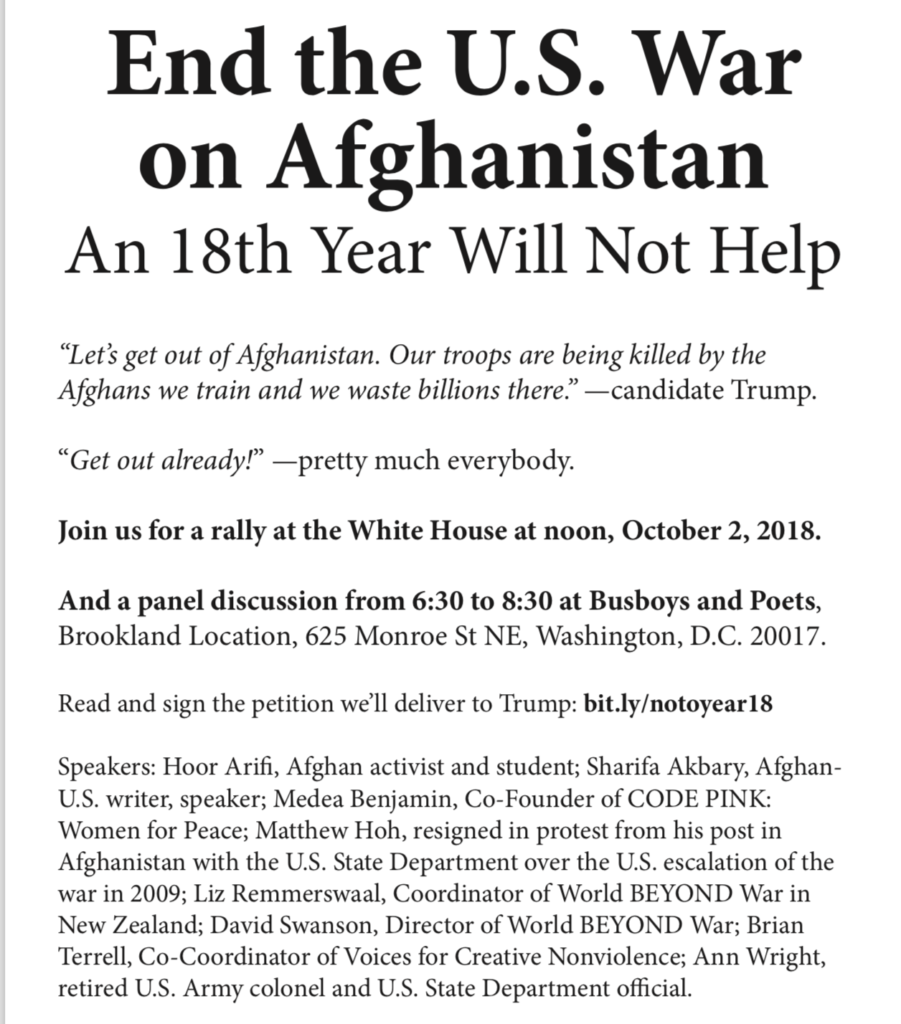 Matthew Hoh, resigned in protest from his post in Afghanistan with the U.S. State Department over the U.S. escalation of the war in 2009.

Liz Remmerswaal, Coordinator of World BEYOND War in New Zealand.

Please print and distribute this flyer.