This month we sat down with Maya Garfinkel, who is World BEYOND War’s newly hired Canada Organizer while Rachel Small is on parental leave until March 2023. Maya (she/they) is a community and student organizer based in Montréal, Canada on unceded Kanien’kehá:ka Territory. She is currently finishing up her BA in Political Science and Geography (Urban Systems) at McGill University. As an undergraduate, Maya has organized at the intersection of the climate and peace movements with Divest McGill, Students for Peace and Disarmament at McGill and the Divest for Human Rights campaign. They have also worked on mobilizations around decolonization, anti-racism, and democratization across North America.

Here’s what Maya had to say about why she’s passionate about anti-war movement-building, what keeps her motivated as an organizer, and more: 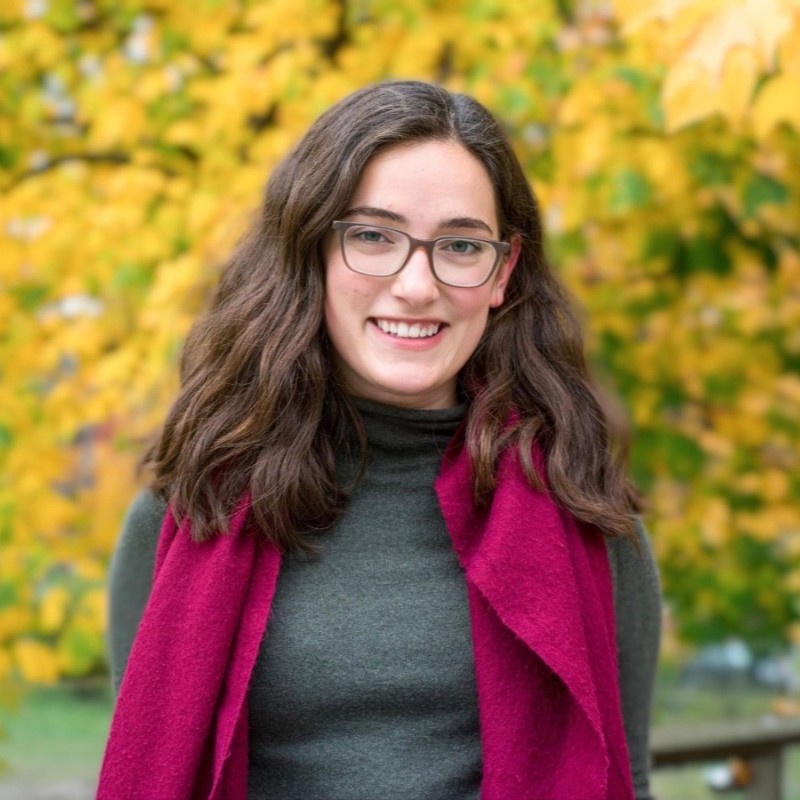 How did you get involved with anti-war activism and what drew you to working with World BEYOND War (WBW)?

I have always been passionate about peace activism and the anti-war movement (in one way or another) ever since I was a little kid. As an Israeli-American, I grew up quite aware of the immediacy and intimacy of war-related violence, pain, and bigotry. Further, as the grandchild of Holocaust survivors, I have always been very sensitive to the toll and humanness of war in such a way that motivates me to keep believing in and participating in the peace movement. I was drawn to World BEYOND War because it is not just an anti-war organization, but also an organization fighting for a transition to a better world. Now, living in Canada, I have become acquainted with the uniquely insidious type of Canadian militarism that requires the frankness of war abolition and a just transition that World BEYOND War offers.

What are you most looking forward to in this position?

I am looking forward to a lot of aspects of this position! I am excited about the amount of collaboration within various coalitions and networks that comes with this position. Getting to know different organizers from around the world is very exciting to me. Further, I am really excited to get to know our Canada chapters and work on local organizing where, I find, there is more opportunity to be very pointed and effectively movement-build. I hope to continue supporting chapters and other local initiatives with the organizational resources WBW can offer.

What called you to pursue a career as an organizer and what does organizing mean to you?

I became involved in organizing as a high school student passionate about history and politics. I had been involved in youth group discussions regarding various social issues in the US but when the Parkland, Florida shooting happened in early 2018, I led a spontaneous mass walkout of my school that sparked a different, more local and direct, type of organizing energy in me. Since then, organizing has been a central part of my life.

Ultimately, the anti-war cause and other key causes I organize for, to me, have always been about implementing better alternatives and believing that humans are capable of a more peaceful existence. Putting my thoughts and actions in collaboration with others through organizing gives me hope, and gets me so much farther than I ever could by myself. Basically, at this rate, I can’t picture myself not organizing; I just feel grateful to have found the teams and movements I have found to organize with.

How do you see anti-war activism as interconnected with other causes?

Anti-war activism is interconnected with other causes in some really integral ways! I come from a climate justice organizing background so that connection is very clear to me. Both causes are not only similar in the sense that they are existential threats to human existence (whose impacts are distributed inequitably) but they are also, quite literally, reliant on one another for success. Further, there are critical connections between other causes, including feminist organizing, that I see similar parallels with the anti-war activism world. In this position, I hope to be a “connector”, linking the peace movement to other critical issues in Canada and around the world, especially those most important to my generation. Throughout my organizing experience, this type of intersectional and interdisciplinary work has been one of the most enjoyable and fruitful elements of all.

What keeps you inspired to advocate for change, despite all of the challenges we are facing as a species and as a planet?

Although some days are easier than others, ultimately, the choice to continue doesn’t really feel like a choice as much as an imperative. I am inspired by the people I work with, both at WBW and beyond, to advocate for change. I am also inspired by my family and friends, especially intergenerational connections that I feel so lucky to have.

How do you think the pandemic has impacted organizing & activism?

On a macro-level, I think that the pandemic has impacted organizing and activism by demonstrating what collective action in response to emergency circumstances can really feel and look like. I think the challenge for organizers is to seize that moment to movement-build around institutions that are failing us, even as those same institutions were able to make drastic changes during the pandemic. On a more concrete level, I think the pandemic has impacted organizing & activism by making it more accessible to many through virtual options going (even more) mainstream! However, it has also been important to consider how virtual options are less accessible for people or places in which technology is less available/usable. In essence, the pandemic-induced shift in organizing spaces has prompted a lot of conversations about accessibility in organizing that I think are a long time coming!

Lastly, what are your hobbies and interests outside of World BEYOND War?

I love to cook (especially soup), explore Montreal’s many parks (ideally with a hammock and book), and travel when possible. I am also involved in interfaith work at McGill University. This summer, I am focusing on taking advantage of all of the free outdoor festivals and music that the city has to offer as a respite from French classes and finishing my thesis.