War propagandists, like magicians, use sensory and psychological misdirection that play upon our own cognitive biases. 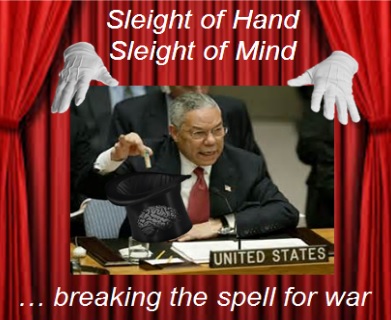 Try this experiment that shows how important, powerful and persistent the Framing Bias is. Two cards will flash on the screen; say what they are out loud.

The philosopher of science, Thomas Kuhn said, ‘Without a paradigm, good or bad, we cannot function.’

He also warned us that, “We conform experience to our paradigms”. Or as Walter Lippmann said, “We frame first then see”.

We are adrift without a frame – we seek them and tend to grasp onto one when one (or two, as below) is presented.

Can You Spot the Propaganda in this news clip:

How I See It