Savagery and Its Promoters and Profiteers 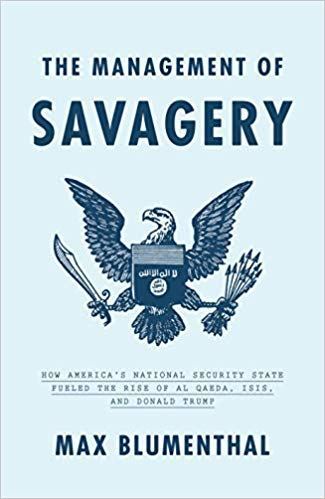 Max Blumenthal’s new book, “The Management of Savagery: How America’s National Security State Fueled the Rise of Al Qaeda, ISIS, and Donald Trump,” is over 300 pages and wastes not a word. It also does far more than it claims.

“This book,” Blumenthal writes, “makes the case that Trump’s election would not have been possible without 9/11 and the subsequent military interventions conceived by the national security state. Further, I argue that if the CIA had not spent over a billion dollars arming Islamist militants in Afghanistan against the Soviet Union during the height of the Cold War, empowering jihadist godfathers like Ayman al-Zawahiri and Osama bin Laden in the process, the 9/11 attacks would have almost certainly not taken place. And if the Twin Towers were still standing today, it is not hard to imagine an alternate political universe in which a demagogue like Trump was still relegated to real estate and reality TV.”

My reaction to this was: “Yeah, no kidding. I’d like others to know all the obvious things they don’t, including these, so hopefully they’ll read and get something new out of this book.” But I myself got a mountain of new things out of this book, especially from its early chapters. It not only does what it sets out to do in a way that has not been done before, but goes beyond that to establish through numerous surprising details a portrait of cynical political- / financial- / career-profiteering from mass killing that deserves to be examined carefully.

To consider the thousands of details in this book, you’ll have to read it. But here are a few.

The U.S. government in the 1980s gave the University of Nebraska $1 million to produce millions of third-grade text books to prepare children in Afghanistan to gouge out the eyes and amputate the legs of Soviet soldiers — books still used by the Taliban today.

While the U.S. government armed and trained jihadists in Afghanistan, refugees fled to Europe, stimulating fascist groups unheard from in decades. Norway saw its first right-wing terror attack (on a mosque) in 1985.

In 1987, Ronald Reagan’s Immigration and Naturalization Service drafted plans to imprison Arab Americans at a concentration camp in Oakdale, Louisiana.

The top U.S. recruitment center for fighters to send to Afghanistan in the 1980s was in a storefront on Brooklyn’s Atlantic Avenue. It was a branch of the Services Bureau funded by Osama bin Laden.

Al Qaeda member and U.S. terrorist-watch-listee Ali Abdel Saoud Mohamed joined the U.S. Army and gave lessons to its officers. “We have to establish an Islamic state because Islam without political domination cannot survive,” he told them. He also made use of documents he gained access to, translating them into Arabic, highlighting the U.S. embassies in Kenya, Tanzania, and Yemen, and smuggling them to jihadists.

U.S. secret agencies and the Saudi kingdom developed a closer relationship through their warmaking in Afghanistan that kicked off U.S. weapons dealing to Saudi Arabia in a major way. The Afghan operation had results around the world for years to come.

A Filipino who fought alongside bin Laden in Afghanistan took his CIA and ISI training back to the Philippines to “harass, attack, and murder Christian priests, wealthy non-Muslim plantation owners, and merchants and local government in the southern Philippine island of Mindanao.”

Afghanistan was the beginning of a continuing policy of supporting Islamic extremist fighters in various parts of the world, a policy with direct blowback, with vicious cycles kicked off by the movement of refugees, and with the rapid transfer of people and groups from lists of partners to lists of enemies and vice versa, the only constant being weapons sales.

Osama bin Laden’s approach to the United States after the Gulf War was essentially the same as had been his earlier U.S.-funded-and-trained approach to the USSR. Bin Laden aimed to bring down the U.S. empire by provoking it into lashing out in self-destructive ways that would destroy itself. He had many successes, including attacks on U.S. embassies making use of CIA training. One of bin Laden’s chief partners has been Saudi Arabia.

Over and over again, a tangled web has been further tangled, in apparent attempt to avoid embarrassment. Terrorists have been freed and left free and unaccountable rather than risk public awareness of their ties to the U.S. government. This has meant decades of avoiding indictments and testimony that would have embarrassed the CIA, FBI, and others. And that has meant new crimes by the same people.

As one reads “The Management of Savagery,” it is not the “why do they hate us?” idiocy that looms largest, but rather the question “How did they manage to express their opposition to U.S. policies with such deadly force?” The answer, in large measure, is U.S. arming and U.S. training.

Blumenthal addresses and properly dismisses 911-Trutherism, Russiagate, and other misdirections. The 911-Truthers, he believes, “inadvertently ran interference for the imperialist power elite they claimed to disdain.” By this, the author means that the Truther focus on the absurd and minute details of the September 11th crimes and ludicrous theories as to how they were committed, took attention away from what the U.S. government had done to provoke those crimes and to allow them to occur.

Afghanistan is a small part of the book, which winds its way right up to the present moment, through the war on Iraq, the spread of Islamophobia in the United States; the (beginning of the ongoing) war on Libya — where, again, the U.S. government and its allies armed the same sort of fanatics as in Afghanistan (still going on this week), as well as the creation of ISIS, the arming of “moderate” murderers in Syria, the new crowds of refugees, the new rise of fascism in Europe, the blowback through mass-shootings in the United States, the blowback in the form of Israeli training of U.S. police and excess weapons given to police by the Pentagon, and much else.

“The Management of Savagery” not only shows us what it sets out to, but shows us some of why and how people have been led to believe false narratives. “The American people did not choose this fight,” lied President Barack Obama. “It came to our shores and started with the senseless slaughter of our citizens.” If you believe that one, I’ve got a couple of dozen presidential candidates to sell you.