The Roots of Injustice in Colfax, Louisiana, Go Very Deep

A story of the real America—unfortunately.

No organization is doing more good work these days than the people at ProPublica, which is not shy about finding stories in the small places that say a lot about what kind of country we are, as opposed to what kind of country we suppose ourselves to be. Let’s take a trip to Colfax, Louisiana, where the U.S. government blows things up.

Facing an uproar, the Army turned to a familiar partner to help placate the residents of Minden: A private facility in Colfax, 95 miles south, operated by Clean Harbors, a longtime Defense Department contractor and one of the largest hazardous waste handlers in North America. The Colfax plant is the only commercial facility in the nation allowed to burn explosives and munitions waste with no environmental emissions controls, and it has been doing so for the military for decades. And so while the Army ultimately commissioned a special incinerator to dispose of most of the Minden explosives, more than 350,000 pounds of them were shipped here. Over the ensuing months, the munitions were burned on the grounds of the plant, fueling raging fires that spewed smoke into the air just hundreds of yards from a poor, largely black community.

I may never recover from the shock.

In 2015 alone, 700,000 pounds of military-related munitions and explosives were trucked to Colfax, where both Clean Harbors and the military have so far been able to outmaneuver a community with abundant concerns but little money, and even less political influence, to fight back.

Seriously, I may have to lie down for a moment.

The burns take place several times each day, and when they do, they turn parts of Colfax into a virtual war zone. “It’s like a bomb, shaking this trailer,” said Elouise Manatad, who lives in one of the dozen or so mobile homes speckling the hillside just a few hundred yards from the facility’s perimeter. The rat-tat-tat of bullets and fireworks crackles through the woods and blasts rattle windows 12 miles away. Thick, black smoke towers hundreds of feet into the air, dulling the bright slices of sky that show through the forest cover. Manatad’s nephew Frankie McCray — who served two tours at Camp Victory in Iraq — runs inside and locks the door, huddling in the dark behind windows covered in tinfoil. Like most of the people who live there, Manatad and McCray find it difficult to believe the booms and clouds aren’t also exacting some sort of toxic price.

Last November, state environment officials parked an air monitoring van on Bush road a few doors down from Elouise Manatad’s trailer. Manatad says they never told her what they were doing or what they’d found, but lab samples obtained from the state show environmental regulators detected notable levels of acrolein, a highly toxic vapor commonly associated with open burns of munitions. A division of the U.S. Centers for Disease Control and Prevention describes acrolein as having a “suffocating odor” and causing severe respiratory problems and heart attacks — even at low doses and for as long as 18 months after exposure. The lab reports also showed low levels of other volatile organic compounds, including benzene, known to cause cancer, and which the World Health Organization warns has “no safe level of exposure.”

Colfax, of course, also holds a dark place in American history. On April 13, 1873, Easter Sunday, a white supremacist mob attacked the local courthouse with the goal of violently overturning the elected government of Colfax Parish. They even rolled up a cannon and aimed it at the front door. Local African Americans had been mustered into a militia to defend the elected government. Soon, the defenders surrendered and, ultimately, they were murdered as the mob fanned out on a killing spree in which 150 African-Americans were killed. 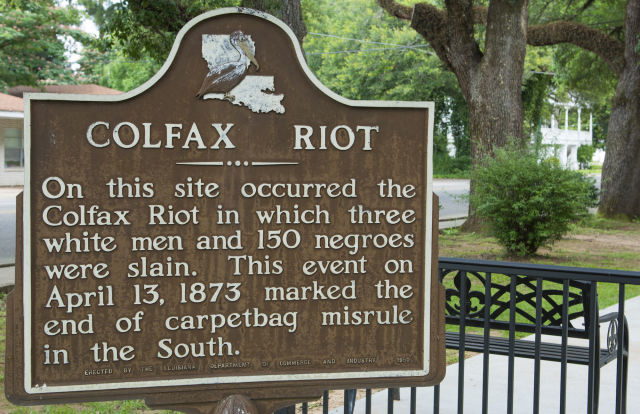 The state militia finally arrived and 97 white men were rounded up and charged under the Enforcement Act of 1870, the so-called “Ku Klux Klan Act.” Some of them were actually convicted. But those convictions were overturned in the iniquitous Supreme Court decision in U.S. v. Cruikshank, which ruled the Enforcement Act unconstitutional and opened the door to the white supremacist terrorism that was the fiery energy that underlay American apartheid for the next century, the federal government’s ability to protect African-American citizens having been paralyzed by the action of the Court and, ultimately, by the collective decision within the national government to renege in one way or another on all the promises made during Reconstruction.

As the ProPublica piece observes, there is still a monument in Colfax to the mob that brought down the elected government in 1873.

Many of the black residents living close to the plant see the history differently. They say they have for years harbored concerns over their health. Manatad suffers from recurring strokes and respiratory infections. She says at least five of her neighbors have thyroid disorders, a condition that has been linked to exposure to perchlorate. Residents gossip about former burn facility employees who died of cancer. When the Minden shipments began, out-of-town activists who opposed the large-scale explosives burns in the northern part of the state came to Colfax and found an organized, vocal audience among the community’s leaders. On a recent morning, down the hill from Manatad’s trailer and closer to a more moneyed part of Colfax, the dewy air was thick with the smell of firecrackers. Burns from the plant left a dark stain across the sky. In a modest ranch house surrounded by acres of close-cropped green lawn, a mostly white crowd — schoolteachers and parish commissioners and farmers — discussed how to stop the open burning at the Clean Harbors site. The meeting began with a prayer around a circle. A man’s shirt read, “Stop the burns. Refuse to be Collateral Damage.”

Power is something the actual residents of Colfax lost in 1873 and the evidence is that they never got much of it back.