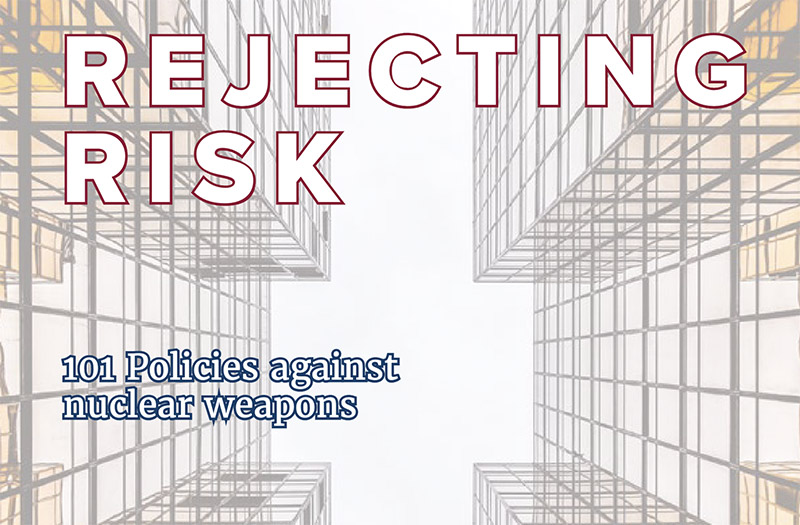 The report also shows 42 institutions that still have room for improvement. This is an increase of 24 policies than what was previously reported in “Beyond the Bomb”, and since the nuclear ban treaty went into effect.

59 financial institutions have a public policy that is comprehensive in scope and application. The financial institutions in the Hall of Fame are based in Australia, Belgium, Canada, Denmark, Finland, Germany, Ireland, Italy, Luxembourg, Mexico, New Zealand, Norway, Sweden, Switzerland, the Netherlands, United Kingdom and the United States.  17 of the institutions are completely new to the Don’t Bank on the Bomb analysis, and 5 have moved up from their previous listing as Runners-Up.

Each institution’s policy profiled in the Hall of Fame undergoes a rigorous assessment. Only financial institutions with group level public policies are eligible. Those policies must be applied to all types of nuclear weapon producers from all locations excluding them from all the institutions’ financial services. The institution must also pass an implementation check, to see if any investments are found. Only then does it qualify for the Hall of Fame.

The Runners-Up section highlights another 42 financial institutions that have some policy in place- though some also have investments. The category is broad. Financial institutions included range from those with policies nearly eligible for the Hall of Fame, to those with policies that still allow considerable sums of money to be invested in nuclear weapon producers. They are therefore ranked on a four-star scale to illustrate the comprehensiveness of their policies. One-star policies are included to demonstrate that there is a wide and ongoing debate among financial institutions when it comes to including nuclear weapons association criteria in their socially responsible investment standards. However diverse these policies are, they all express a shared understanding that involvement in nuclear weapons production is controversial.

The identification of policies for inclusion in this report is based on peer recommendations. The report does not claim to represent an analysis of all financial institution policies on weapons, rather it provides a snapshot. Those in a position to recommend additional policies for inclusion are invited to do so. With a significant percentage of new wealth seeking investment in funds with strong environmental, social and governance criteria, along with the Entry into Force of the Treaty on the Prohibition of Nuclear Weapons, it can be estimated that the number of policies excluding nuclear weapon producers will grow significantly.