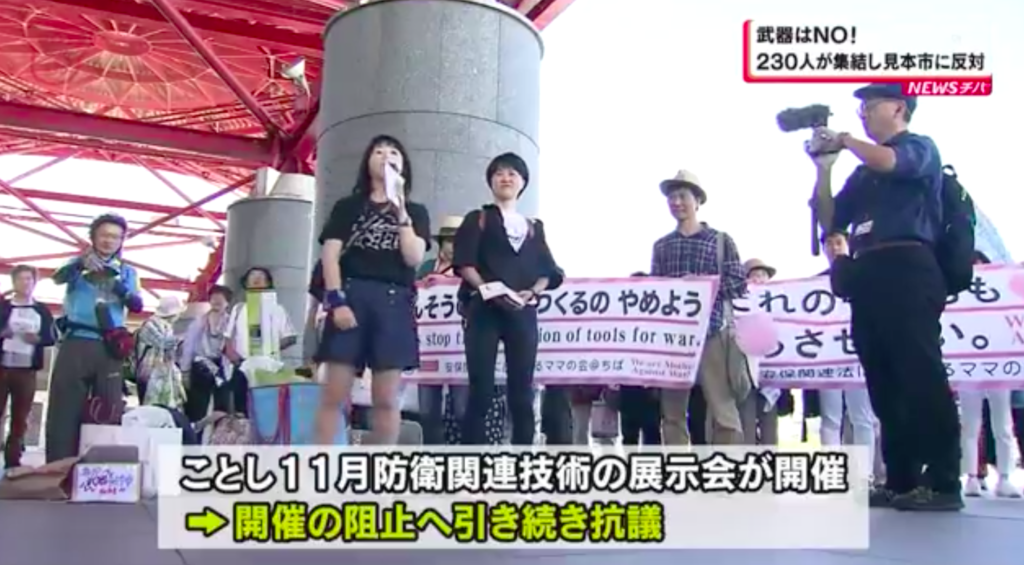 Some people are actually happy about the “consistently increasing defence budgets” of recent years. One finds those words in the Exhibitor Prospectus for the weapons market in Japan called the “Maritime Air Systems & Technologies for Defense, Security, and Safety” (MAST Asia 2019). If military budgets for governments around the world continue to expand, then it may be true that Japan has a “unique environment in which business will abound”: the business of manufacturing and selling the weapons of war.

Perhaps by the word “unique,” they mean that Japanese weapons development was once held back by its peace constitution and largely anti-war populace, but Japan’s self-imposed ban on weapons sales to other countries was removed in 2014 . Under the ultranationalist government of Prime Minister Shinzo Abe, Japan is remilitarizing at a breakneck pace. Hearing about MAST Asia 2019 in Chiba, Japan will be sad for many people in East Asia, where there are still people who feel the wounds inflicted on them by the Empire of Japan (1868-1947).

Some people have the foresight and the sympathy needed to stand up and reject this convention and military trade show. 230 people rallied at the convention site for a day of speech making, a “human chain” with flowers, and a “die-in” on June 17th, the first day of the 3-day at the Makuhari Messe convention center in Chiba City, only a one-hour train trip from Tokyo.

While 73 companies from 53 countries displayed their wares, including 10 Japanese companies such as Mitsubishi and Kawasaki, people from peace organizations, including a group called “Mothers against War” said “no!” to what they called “merchants of death,” “no” to what they call this “model weapons market,” and held signs with messages such as “weapons are not a way to make peace.” Another weapons market is scheduled for the 18th to the 20th of November, but a petition to stop it is being circulated.

Here is video of the interviews (only in Japanese) with the protestors, their speeches, antiwar chants, and “die-in” (as in “sit-in”). Here is a short news report from the perspective of the protestors and here are some other photos of the protests.