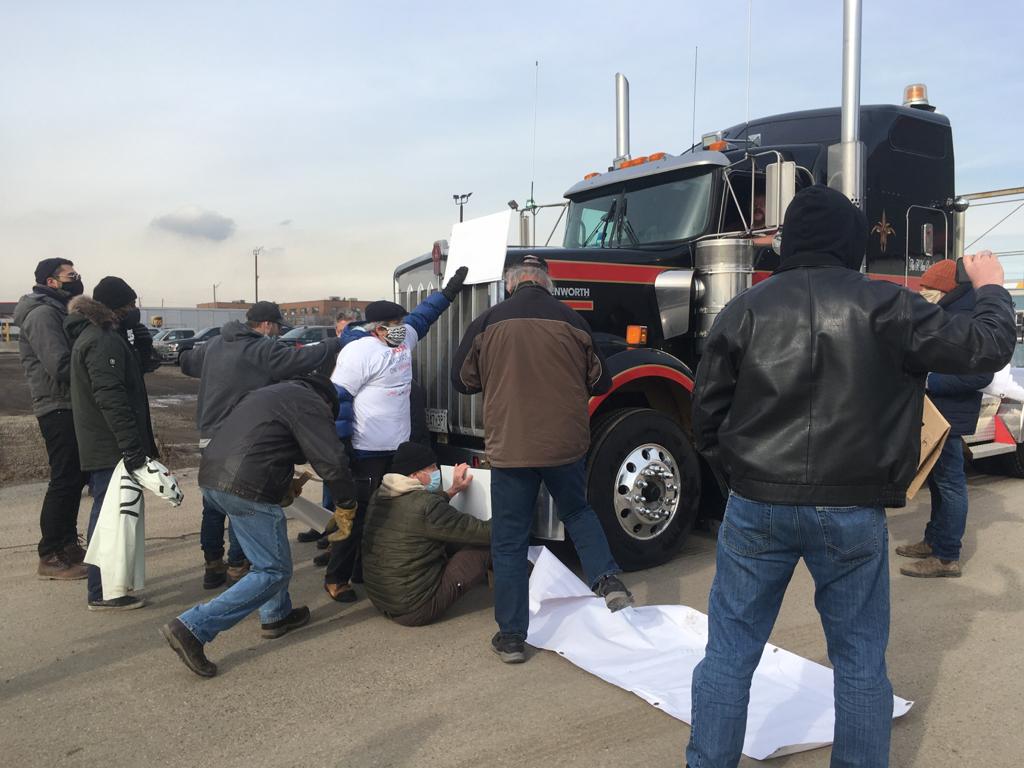 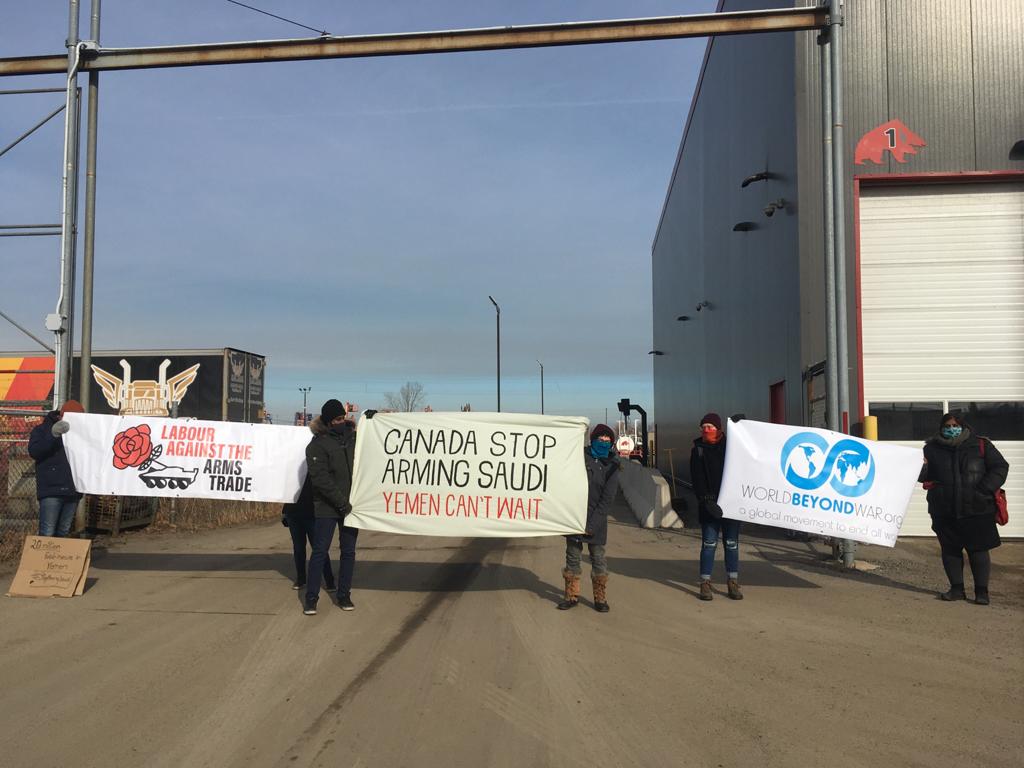 The activists are calling on Paddock to end its complicity in the brutal Saudi-led war in Yemen, which has killed almost a quarter of a million people, and calling on the Canadian government to end arms exports to Saudi Arabia.

“The demonstration is part of a global day of action against the war on Yemen featuring more than 300 organizations in 17 countries,” says Rachel Small of World BEYOND War.

“People across Canada are demanding the federal government immediately end arms exports with Saudi Arabia and expand humanitarian aid for the people of Yemen.”

Yemen today remains the worst humanitarian crisis in the world, according to the United Nations. Over 4 million people have been displaced because of the war, and 80% of the population, including 12.2 million children, are in desperate need of humanitarian assistance. To add to the already dire situation, Yemen has one of the worst Covid-19 death rates in the world – it kills 1 in 4 people who test positive.

This humanitarian crisis is a direct result of the Western-backed, Saudi-led war and indiscriminate bombing campaign that has raged against Yemen since March 2015, as well as an air, land and sea blockade which prevents desperately-needed goods and aid from reaching the people of Yemen.

Despite the global pandemic and calls from the United Nations for a global ceasefire, Canada has continued to export arms to Saudi Arabia. Since the beginning of the pandemic, Canada has exported over $750 million worth of weapons to Saudi Arabia, part of a $15 billion arms deal.

“Most Canadians don’t realize that weapons manufactured here continue to fuel a war that has led to the deaths of hundreds of thousands of people,” says Simon Black, a professor at Brock University and member of Labour Against the Arms Trade, a coalition of peace and labour activists working to end Canada’s participation in the international arms trade.

“Countries like Germany, Finland, the Netherlands, Denmark and Sweden have all cancelled their weapons deals with Saudi Arabia,” he says. “There’s absolutely no reason why Canada can’t do the same and help end this war.”

Light armoured vehicles manufactured by General Dynamics Land Systems, in London, Ontario, are being transported to port by Paddock Transport International, where they are loaded onto Saudi ships (see https://www.facebook.com/chris.hanlon.8626/posts/10157385425186615).

“A child in Yemen dies every ten minutes because of this horrific war. As a parent, how can I ignore that tanks made in Canada are rolling right by me on their way to the worst humanitarian situation on earth?” says Small.

“Working people in Canada want jobs that contribute to a better society, a clean environment and a peaceful world, not those that manufacture weapons of war and hurt and kill innocent men, women and children,” says Black.

“Canada must join other democracies throughout the world and immediately end its production and export of weapons to Saudi Arabia.”

UN agencies and humanitarian organizations have repeatedly documented that there is no military solution possible in the current conflict in Yemen. The only thing the constant supply of arms to Yemen does is prolongs hostilities, and increases suffering and numbers of the dead.

In September 2020, a report by the UN Group of Eminent International and Regional Experts on Yemen specifically named Canada as one of the countries “perpetuating the conflict” in Yemen through ongoing weapons sales to Saudi Arabia.

On September 17, the one-year anniversary of Canada’s accession to the Arms Trade Treaty (ATT), a coalition of civil society organizations representing a cross-section of Canadian labour, arms controls, human rights, international security and peace organizations wrote an open letter to Prime Minister Trudeau reiterating their continued opposition to the Liberal government’s issuance of arms exports permits to Saudi Arabia. The letter was part of a pan-Canadian day of action against arms exports to Saudi Arabia, the second of its kind in 2020.

The September 17th letter to Prime Minister Trudeau was the fourth such letter raising concerns about the serious ethical, legal, human rights and humanitarian implications of Canada’s ongoing weapons exports to Saudi Arabia. The signatories have yet to receive a response from the Prime Minister or relevant Cabinet ministers on the matter.