Choose One of These Items When You Become a Recurring Donor

When you become a recurring donor, you help World Beyond War succeed. Click here to donate.

When you donate, you’ll see a dropdown menu from which you can choose one of these items:

A T-shirt. There are many styles, colors, and sizes to choose from. (Let us know exactly what you want. Must be a t-shirt, not a sweatshirt.)

A Global Security System: An Alternative to War by World Beyond War. This book describes the “hardware” of creating a peace system, and the “software” — the values and concepts — necessary to operate a peace system and the means to spread these globally.

War Is Never Just by David Swanson. This critique of “Just War” theory finds the criteria it uses to be either unmeasurable, unachievable, or amoral, and the perspective it takes too narrow, arguing that belief in the possibility of a just war does tremendous damage by facilitating enormous investment in war preparations–which strips resources from human and environmental needs while creating momentum for numerous unjust wars. Swanson builds a case that the time has come to set behind us the idea that a war can ever be just.

Waging Peace: Global Adventures of a Lifelong Activist by David Hartsough.  David Hartsough knows how to get in the way. He has used his body to block Navy ships headed for Vietnam and trains loaded with munitions on their way to El Salvador and Nicaragua. He has crossed borders to meet “the enemy” in East Berlin, Castro’s Cuba, and present-day Iran. He has marched with mothers confronting a violent regime in Guatemala and stood with refugees threatened by death squads in the Philippines. Hartsough’s stories inspire, educate, and encourage readers to find ways to work for a more just and peaceful world.

War No More: The Case for Abolition, by David Swanson.
This book by David Swanson, with a foreword by Kathy Kelly, presents what numerous reviewers have called the best existing argument for the abolition of war, demonstrating that war can be ended, war should be ended, war is not ending on its own, and that we must end war.

When the World Outlawed War, by David Swanson.
This book was named by Ralph Nader as one of the six books everyone should read. A forgotten story from the 1920s of how people created a treaty to ban all war — a treaty still on the books but not remembered.

Military Recruiting in the United States, by Pat Elder. This book provides a fearless and penetrating description of the deceptive practices of the U.S. military as it recruits American youth into the armed forces. Long-time antiwar activist Pat Elder exposes the underworld of American military recruiting in this explosive and consequential book.

Look Not Unto the Morrow, by Robert Fantina. Innocence shattered and ultimate redemption are portrayed against the backdrop of the Vietnam War and the turbulent sixties. The story follows the lives of three young people as they experience love and war. Roger Gaines is the promising young college student, drafted into the army and traumatized by his experiences in basic training and Vietnam. Pam Wentworth is the loving girlfriend he leaves behind, who evolves from naive college student, to political activist, to radical anarchist. Michelle Healy is the young woman Roger meets when he returns home, who loves him unconditionally when he can no longer love himself. “I recommend to anyone with an interest in the Vietnam War era.” — Former senator and presidential candidate George McGovern.

They Were Soldiers: How the Wounded Return from America’s Wars: The Untold Story, by Ann Jones. After the American invasion of Afghanistan in 2001, Ann Jones spent a good part of a decade there working with Afghan civilians—especially women—and writing about the impact of war on their lives: the subject of Kabul in Winter (2006). That book revealed the yawning chasm between America’s promises to Afghans and its actual performance in the country. Meanwhile, Jones was pondering another evident contradiction: between the U.S. military’s optimistic progress reports to Americans and its costly, clueless failures in Afghanistan as well as Iraq. In 2010-2011, she decided to see for herself what that “progress” in Afghanistan was costing American soldiers. She borrowed some body armor and embedded with U.S. troops.

War Is A Lie, by David Swanson.
This is a widely praised best-selling classic. “There are three insightful books I’ve read that explain how and why no good can come of the current U.S. reliance on military force and war in seeking its desired ‘Pax Americana’: War Is A Racket by General Smedley Butler; War Is A Force That Gives Us Meaning by Chris Hedges, and War Is A Lie by David Swanson.” — Coleen Rowley, former FBI special agent, whistleblower, and Time magazine person of the year.

An Indigenous People’s History of the United States, by Roxanne Dunbar-Ortiz. Today in the United States, there are more than five hundred federally recognized Indigenous nations comprising nearly three million people, descendants of the fifteen million Native people who once inhabited this land. The centuries-long genocidal program of the US settler-colonial regimen has largely been omitted from history. Now, for the first time, acclaimed historian and activist Roxanne Dunbar-Ortiz offers a history of the United States told from the perspective of Indigenous peoples and reveals how Native Americans, for centuries, actively resisted expansion of the US empire.

Dissent: Voices of Conscience, by Ann Wright, Susan Dixon, Daniel Ellsberg.
During the run-up to war in Iraq, Army Colonel (Ret.) and diplomat Ann Wright resigned her State Department post in protest. Wright, who had spent 19 years in the military and 16 years in diplomatic service, was one among dozens of government insiders and active-duty military personnel who spoke out, resigned, leaked documents, or refused to deploy in protest of government actions they felt were illegal. In Dissent: Voices of Conscience, Ann Wright and Susan Dixon tell the stories of these men and women, who risked careers, reputations, and even freedom out of loyalty to the Constitution and the rule of law.

Addicted to War: Why the U.S. Can’t Kick Militarism, by Joel Andreas.
Hard-hitting, carefully documented and heavily illustrated, this book reveals why the United States has been involved in more wars in recent years than any other country. Read Addicted to War to find out who benefits from these military adventures, who pays—and who dies. Over 120,000 copies of the previous edition are in print. This new edition is substantially reworked and fully updated through the War in Iraq. “A witty and devastating portrait of U.S. military policy.”—Howard Zinn

Living Beyond War: A Citizens Guide, by Winslow Myers. After thousands of years, the dream of a world without war may seem hopelessly unrealistic. But, as Winslow Myers shows in this concise, eloquent primer, what is truly unrealistic is the notion that war remains a reasonable solution to the conflicts on our planet. He begins by showing why war has become obsolete (though obviously not extinct): it doesn’t solve the problems that ostensibly justify it; its costs are unacceptably high; the destructiveness of modern weapons could lead to human extinction; and there are better alternatives. After elaborating on these points, he outlines a new way of thinking that will be necessary if we are to move beyond war, in particular a recognition of our “oneness” and global interdependence. Finally, he outlines practical alternatives and inspiring examples that anticipate the goal of a world “beyond war.”

Civilization is Possible,  by Blase Bonpane. Fifty years from now, historians will be identifying the criminality of the George W. Bush Administration. As these academics document their task they will be dependent on authors who were in his face at the time of these international crimes. Blase Bonpane believes that silence is complicity. Civilization is Possible identifies the crimes at the very time they were being committed. Aside from the weekly commentaries of Blase Bonpane, this volume also includes his personal interviews with like minded observers of the disastrous Bush years: Noam Chomsky, Chalmers Johnson, Robert Fisk, Greg Palast and Peter Laufer. These are voices crying in the wilderness of rampant militarism, torture and collateral damage (murder). This toxic mix was nurtured by literally hundreds of lies coming from a failed administration that blatantly abused the sacred trust of our citizens.

Guerrillas of Peace, Liberation Theology and the Central American Revolution, by Blase Bonpane. Blase Bonpane has lived and worked with the realities of liberation theology for more than a quarter of a century. In Guerrillas of Peace, Bonpane takes the reader from the high country of Huehuetenango in Guatemala to intensive grass roots organizing in the United States. He shows that we cannot renew the face of the earth and coexist with the torturing, murdering governments of Guatemala and El Salvador, and their accomplices in Washington.

Guerrillas of Peace On the Air, Blase Bonpane.
Radio commentaries, reports and interviews which promote the ideology of peace, 2002. Blase Bonpane is a new abolitionist who believes the war system can be replaced with a peace system. Guerrillas of Peace includes radio commentaries, interviews, and other works which examine and promote the ideology of peace. 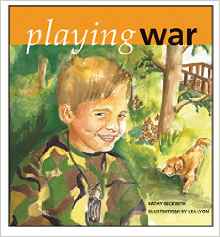 Playing War, by Kathy Beckwith. One summer day Luke and his friends decide to play their favorite game of war, but Sameer, who is new to the neighborhood, hesitates to join in. When he tells them that he has been in a real war, they don’t believe him. As he tells what happened to his family, the others start to see their game in a new light.

A Mighty Case Against War, by Kathy Beckwith. Beckwith relates a history of America’s wars that includes “What America Missed in U.S. History Class.” She details why war sells, the fallacies of common justifications for war, true costs of war, and sensible alternatives. A Mighty Case Against War proposes that this culturally supported, deeply entrenched system of governmental violence is simply too costly, destructive, counterproductive, and inhumane to leave unchallenged. An easily readable book, this is a resource for youth and adult education, peacebuilding activists, and all who have wondered if a world beyond war is possible.

When you become a recurring donor, you help World Beyond War succeed. Click here to donate.