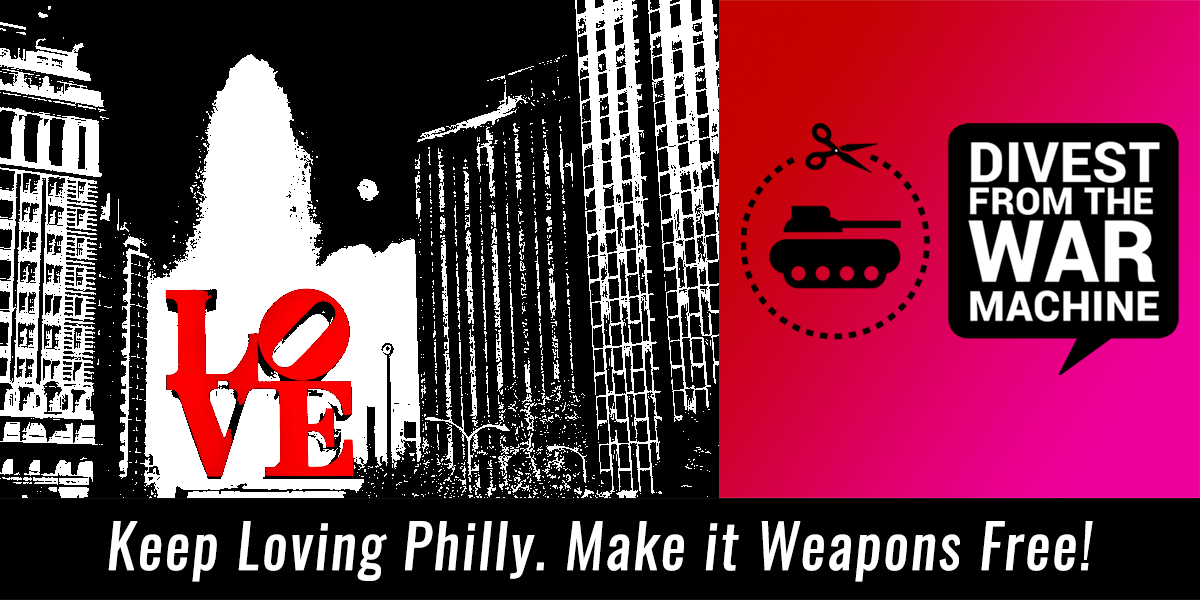 The unfolding crisis in Ukraine has many worried that we are on the brink of nuclear war, as Putin has put Russia’s nukes on high alert. Let us not forget that, seventy-seven years later, the death toll is still climbing due to the cancerous aftermath from the first and last time the A-bomb was used. The bomb instantly killed 120,000 people in Hiroshima and Nagasaki and has caused at least 100,000 more deaths since due to radiation. And today’s nukes, which are in some cases 7 times more powerful than those dropped during WWII, make the bombs of the past look like baby toys.

Through its asset managers, the Philadelphia Pension Board is investing Philadelphians’ tax dollars in nuclear weapons, propping up an industry that is literally based on profiteering from death and that puts all of humanity at risk. The 5 financial institutions that manage the Pension Board’s assets — Strategic Income Management, Lord Abbett High Yield, Fiera Capital, Ariel Capital Holdings, and Northern Trust — are invested in nuclear weapons manufacturers to the tune of $11 billion. And while the Pension Board invests in nuclear weapons, the Doomsday Clock by the Bulletin of the Atomic Scientists is set to just 100 seconds to midnight, indicating the heightened risk of nuclear war.

If you think you’re safe from nuclear fallout because of the Mutual Assured Destruction (MADD) theory, consider that The Union of Concerned Scientists states that the biggest risk of a nuclear weapon launch is likely to be accidental since both the U.S. and Russia have their nuclear weapons on a hair trigger alert, meaning missiles can be launched in minutes, giving very little time for verification. The current tensions with Russia over Ukraine could easily trigger a launch by mistake.

Not only do Philadelphia’s investments in nuclear weapons threaten our safety, but the thing is, they’re not even good economic sense. Studies show that investments in healthcare, education, and clean energy create more jobs — in many cases, better-paying jobs — than military sector spending. And Environmental Social Government (ESG) funds are far from risky. Last year, the City Council passed Council Member Gilmore Richardson’s resolution #210010 calling on the Pension Board to adopt ESG criteria in its investment policy, stating “2020 was a record year for ESG investing, with sustainable funds seeing record inflows and high performance. ESG funds outperformed traditional equity funds in 2020, and experts expect continued growth.”

Divestment isn’t financially risky — and, in fact, the Pension Board has already divested from other harmful industries. In 2013, it divested from guns and in 2017, from private prisons. By divesting from nuclear weapons, Philadelphia will be joining an elite group of forward-thinking cities that have already passed divestment resolutions, including New York City, NY; Burlington, VT; Charlottesville, VA; and San Luis Obispo, CA.

While Philadelphia continues to “make a killing off of killing” by investing in weapons, our community is deprived of adequate funding for life-affirming sectors. Consider this: Fourteen percent of people were food insecure in Philadelphia in 2019. That is over 220,000 humans in our city going to bed hungry every night. These numbers have only been exacerbated due to the COVID-19 pandemic. Instead of investing in some of the largest corporations in the world, the city should prioritize a community investing strategy that keeps money circulating locally and addresses Philadelphians’ essential needs.

This year marked the first anniversary of the UN Treaty for the Prohibition of Nuclear Weapons (TPNW) entering into force, finally making nuclear weapons illegal. The City has already lent its support for the TPNW, passing City Council resolution #190841. Now is the time for the City of Brotherly Love to put the values expressed by resolution #190841, and Gilmore Richardson’s resolution #210010 on ESG investments, into practice. We call on the Pension Board to direct its asset managers to place a screen on its investments to exclude the top 27 nuclear weapons producers. The escalating conflict in Ukraine illustrates that it’s not a moment too soon to act. Divesting Philly’s pension funds from nukes is a baby step towards walking us back from the brink of war.

Greta Zarro is the Organizing Director for World BEYOND War.
Gayle Morrow is a freelance researcher based in Philadelphia.