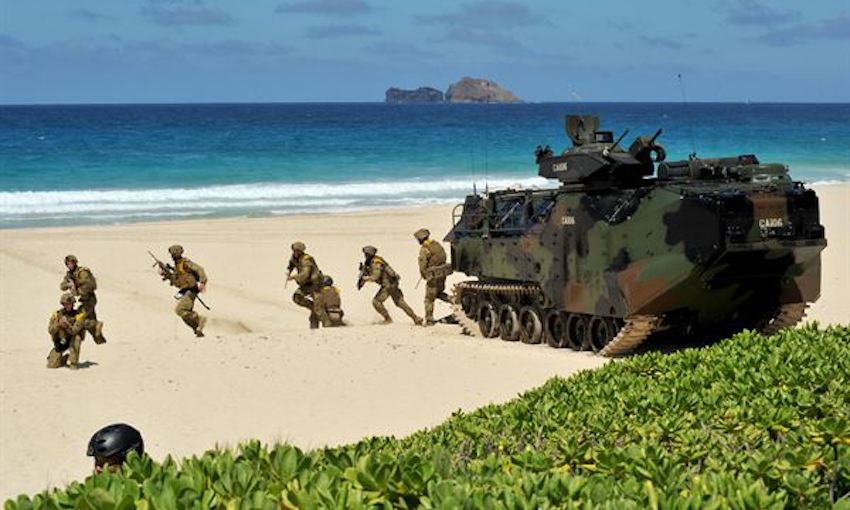 The ‘war games’, which will be  attended by up to 26 countries in Hawaiian waters this August have already been scaled down from three months down to two weeks’ duration because of COVID-19, but the Pacific Pacific Network (PPN) says it should be cancelled altogether.

Two countries, Israel and Chile have already pulled out, and several others, including Australia, are undecided. Currently New Zealand plans to send one ship, the HMS Manawanui with 66 military personnel.

“Indigenous people in Hawai’i are struggling for some degree of self-determination in the face of nuclearisation, militarisation and economic exploitation of the Pacific. We believe our military participation in Rimpac is an ugly expression of this multi-level colonisation – physical, cultural, spiritual, economic, nuclear, military – past and present”, says PPN convenor Liz Remmerswaal from World Beyond War Aotearoa New Zealand.

This Saturday at 1:00pm NZ time, the  Pacific Peace Network is hosting a webinar featuring six representatives from Pacific and Asian countries about their concerns, particularly in relation to the environment and the Black Lives Matter movement.

The webinar is chaired by Liz Remmerswaal from co-host World Beyond War Aotearoa New Zealand, and is produced in association with the Independent and Peaceful Australian Network.
There will be brief video footage of the war games and questions from participants after.

It will be recorded and is available to watch live on: https://actionnetwork.org/events/cancel-rimpac-seminar/?source=facebook&&fbclid=IwAR1gqh_bK-eMJ_PdWd48wIFvYB8PhwCr7iubi4Hjub5WRY9QhCXEYtTPghg

There is also a petition, as below:  https://diy.rootsaction.org/petitions/help-hawaii-stop-the-largest-naval-war-practice-in-the-world