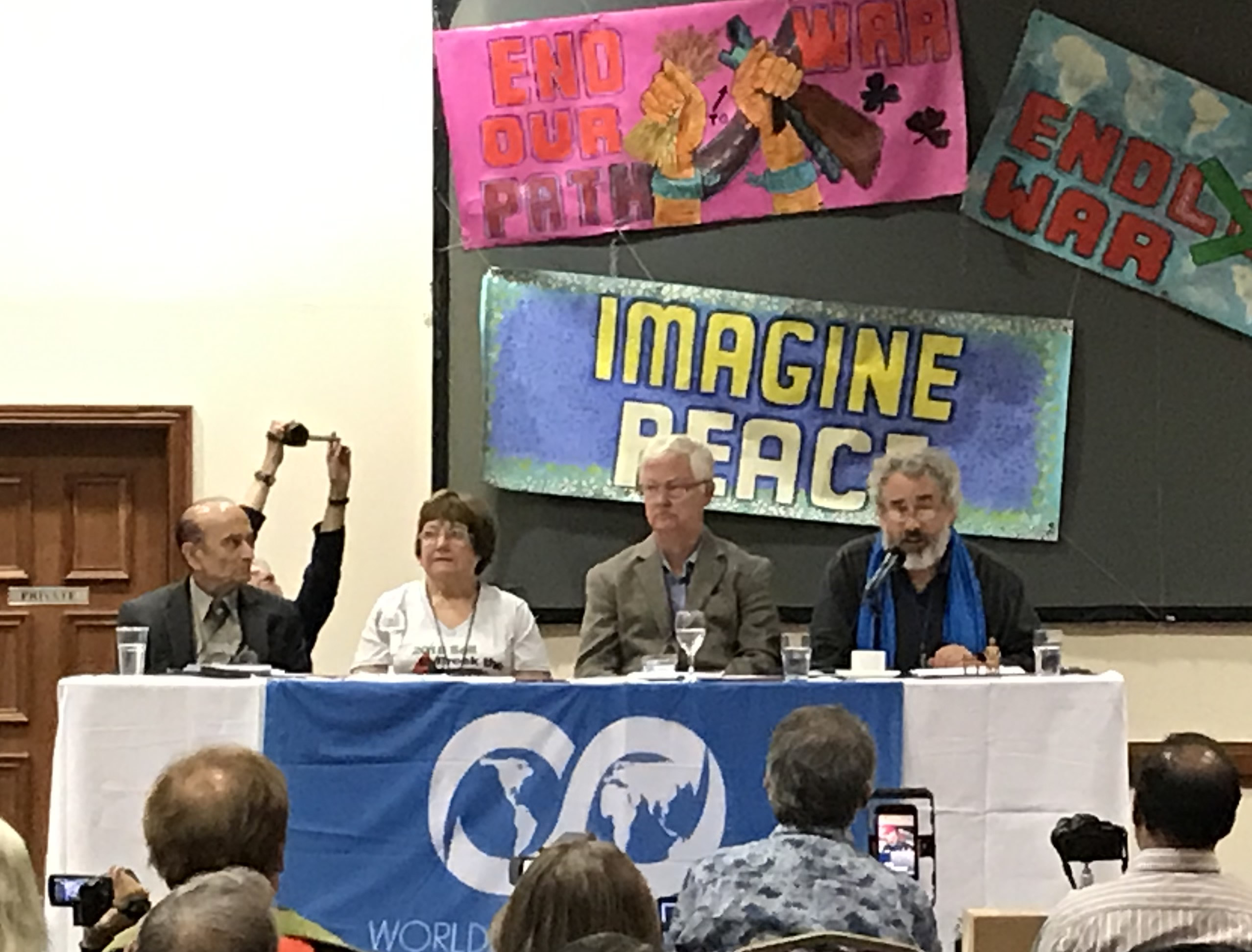 I am very happy to be with you all at this conference. I would like to thank David Swanson and World Beyond War for organizing this important event and also all those attending for their work for peace.

I have long been inspired by the American Peace activists and it is a joy to be with some of you at this conference. A long time ago, as a teenager living in Belfast, and social activist, I was inspired by the life of Dorothy Day, of the Catholic Worker. Dorothy, a nonviolent Prophet, called for an end to war and the money from militarism, to be used to help alleviate poverty.   Alas, if today Dorothy (RIP) knew that one in six individuals in the USA is in the Military-Media-Industrial-Complex and armament costs continue to rise daily, how disappointed she would be. Indeed, one third of the USA military budget would eliminate the entire poverty in the USA.

We need to offer new hope to a humanity suffering under the scourge of militarism and war. People are tired of armaments and war. People want Peace. They have seen that militarism does not solve problems, but is a part of the problem. The Global Climate crisis is added to by the emissions of US military, the greatest polluter in the World. Militarism also creates uncontrollable forms of tribalism and nationalism. These are a dangerous and murderous form of identity and about which we need to take steps to transcend, lest we unleash further dreadful violence upon the world. To do this we need to acknowledge that our common humanity and human dignity is more important than our different traditions.   We need to recognize our life and the lives of others (and Nature) are sacred and we can solve our problems without killing each other.   We need to accept and celebrate diversity and otherness. We need to work to heal the old divisions and misunderstandings, give and accept forgiveness and choose nonkilling and nonviolence as ways to solve our problems.

We are also challenged to build structures through which we can co-operate and which reflect our interconnected and inter-dependent relationships. The vision of the European Union founders to link countries together economically unfortunately has lost its way as we are witnessing the growing militarization of Europe, its role as a driving force for armaments, and the dangerous path, under the leadership of the USA/NATO towards a new cold war and military aggression with the building up of battle groups and a European army. I believe the European countries, who used to take initiatives in the UN for peaceful settlements of conflicts, particularly allegedly peaceful countries, like Norway and Sweden, are now one of the USA/NATO’s most important war assets. The EU is a threat to the survival of neutrality and has been drawn into being complicit in breaking international law through so many illegal and immoral wars since 9/ll. I therefore believe NATO should be abolished, and the myth of military security replaced by Human Security, through International Law and implementation of Peace Architecture. The Science of Peace and implementation of Nonkilling/Nonviolent Political Science will help us transcend violent thinking and replace a culture of violence with a culture of nonkilling/nonviolence in our homes, our societies, our world.

Also the UN should be reformed and should actively take up their mandate to save the world from the scourge of war.   People and Governments should be encouraged to evoke moral and ethical standards in our own personal lives and for Public Standards. As we have abolished slavery, so too we can abolish militarism and war in our world.

I believe if we are to survive as the human family, we must end Militarism and War and have a policy of general and complete disarmament. In order to do so, we have to look at what is sold to us as   the driving forces for militarism and war.

Who are the real beneficiaries of war?   So to begin we are sold the wars under democracy, the fight against terrorism, but history has taught us wars proceeded the fight against terrorism. Greed and Colonialism and seizing of resources proceeded terrorism and the fight for so called democracy proceeded terrorism by thousands of years. We now live in an age of Western Colonialism disguised as a fight for freedom, civil rights, religious wars, right to Protect.   Under the premises we are sold the opinion that by sending our troops there and facilitating this, we are bringing democracy, rights for women, education, and for the more slightly astute of us, for those of us who see through this war propaganda,we are told that this has benefits for our countries. For those of us who are slightly more realistic about our countries goals in these countries we see an economic benefit for cheap oil, tax revenues from companies expansion into these countries, through mining, oil, resources in general and arms sale.

So at this point we are questioned morally for the good of our own country, or for our own morals.  The majority of us do not own shares, in Shell, BP, Raytheon,Halliburton, etc., Shares that skyrocketed (including Raytheon) three fold since the Syrian proxy war began. The major US military firms are:

The General Public do not benefit from the massive tax expenditure incurred by these wars. In the end these benefits are funnelled towards the top. Shareholders benefit and the top l% who run our media, and the military industrial complex, will be the beneficiaries of war.   So we find ourselves in a world of endless wars, as large arms companies, and the people who benefit the most have no financial incentives for peace in these countries.

I would first like to address all Americans and thank the young soldiers and all Americans and give them my deepest condolences as I am truly sorry so many soldiers, and civilians, have been injured or killed in these US/NATO wars.    It is with great regret that the American people have paid a high price, as have the Iraqi, Syrians, Libyans, Afghans,Somalis, but we must call it what it is. America is a Colonial Power, much like the British Empire.   They may not plant their flag or change the currency but when you have 800 USA bases in over 80 countries and you can dictate what currency someone sells their oil in and when you use the economic and financial banking system to cripple countries and you push which leaders you wish to control a country, such as Afghanistan, Iraq, Libya, Syria and now Venezuela, I feel it is Western Imperialism with a modern twist.

In Ireland we suffered our own Colonialism for over 800 years. Ironically, it was the American/Irish that put pressure on the British Empire to give the Republic of Ireland its freedom. So as Irish people to-day we must question our own morals and look to the future and wonder how our children will judge us. Were we the people who facilitated the mass movement of weapons, political prisoners, civilians, through Shannon Airport, to facilitate Imperial powers to slaughter the people in far off lands, and for what end so that Google, Facebook, Microsoft, will continue to provide jobs in Ireland?   How much blood of women and children, has been spilt overseas? How many countries have we, by facilitating USA/NATO forces going through Shannon Airport, helped to destroy? So I ask the people of Ireland, how does this sit with you? I have visited Iraq, Afghanistan, Palestine, and Syria and seen the devastation and destruction caused by military intervention in these countries. I believe it is time to abolish militarism and solve our problems through International Law,mediation, dialogue and negotiations. As an allegedly neutral country it is important that the Irish Government ensures that Shannon Airport is used for civilian purposes and not used to facilitate US military occupations, invasions, renditions, and war purposes. The Irish people strongly support neutrality but this is being negated by the use of Shannon airport by US Military.

Ireland and the Irish people are much loved and respected around the world and seen as a country that has contributed much to the development of many countries, particularly through education, health care, arts and music. However, this history is endangered by the Government’s accommodating the US Military in Shannon Airport also by its participation in NATO-led forces such as ISAF (International Security Assistance Force) in Afghanistan.

Ireland’s neutrality places it in an important position and arising out of its experience in peace making and conflict resolution at home, it could be a Mediator in General and Complete Disarmament and conflict resolution, in other countries caught in the tragedy of violence and war. (It also has an important role in upholding the Good Friday agreement and helping with the restoration of the Stormont Parliament in the North of Ireland.}

I am very hopeful for the future as I believe if we can reject militarism in its entirety as the aberration/dysfunction it is in human history, and all of us who no matter what area of change we work in, can unite and agree we want to see a demilitarized unarmed world. We can do this together. Let us remember in human history, people abolished slavery, piracy, we can abolish militarism and war, and relegate these barbaric ways into the dustbin of history.

And finally let us look to some of the Heroes of our times. Julian Assange, Chelsea Manning, Edward Snowden, to mention a few. Julian Assange is currently being persecuted by British authorities over his role as a publisher and author. Julian’s ground breaking journalism exposing government crimes during Iraqi/Afghan war has saved many lives, but cost him his own freedom and perhaps his own life. He is being tortured psychologically and psychically in a British prison, and threated with extradition to USA to face a Grand Jury, simply by doing his job as a journalist exposing the truth. Let us do all we can we work for his freedom and demand he will not be extradited to USA.   Julian’s father said after visiting his son in hospital in Prison, ‘they’re murdering my Son’. Please ask yourself, what can you do to help Julian get his freedom?