Overcoming Decades of Division between India & Pakistan: Building Peace Across the Radcliffe Line 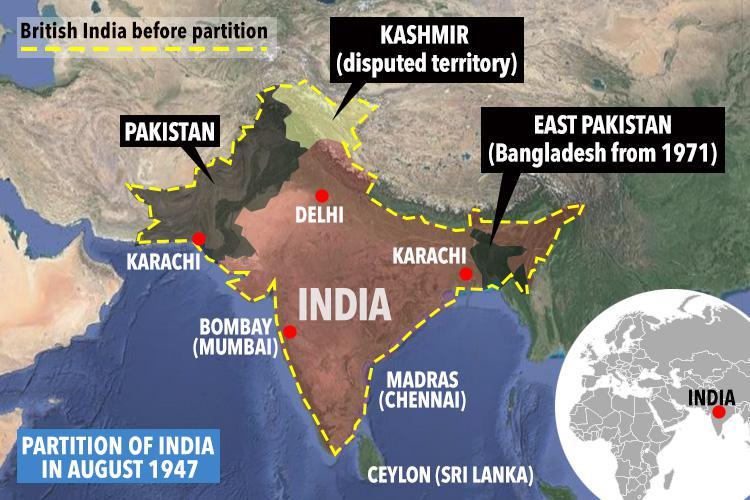 As the clock struck midnight on August 15, 1947, celebratory shouts of freedom from colonial rule were drowned out by the cries of millions frantically making their way through the corpse-littered landscape of nascent India and Pakistan. This is the day that marked the end of the British rule of the region, but also marked the separation of India into two separate nation-states – India and Pakistan. The contradictory nature of the moment, of both freedom and division, has continued to intrigue historians and torment people on both sides of the border until now.

The region’s independence from British rule was marked by its partitioning along religious lines, giving birth to a Hindu-majority India and Muslim-majority Pakistan as two independent countries. “When they partitioned, there were probably no two countries on Earth as alike as India and Pakistan,” said Nisid Hajari, the author of Midnight’s Furies: The Deadly Legacy of India’s Partition. “Leaders on both sides wanted the countries to be allies like the U.S. and Canada are. Their economies were deeply intertwined, their cultures were very similar.” Before the separation, many changes took place that caused the partition of India. The Indian National Congress (INC) primarily led the freedom struggle for India along with prominent figures like M.K. Gandhi and Jawaharlal Nehru based on the concept of secularism and harmony between all religions, particularly between Hindus and Muslims. But unfortunately, the fear of living under Hindu dominance, which was played up by the colonialists and leaders to advance their own political ambitions, led to the demand for the creation of Pakistan.

Relations between India and Pakistan have always been inflexible, conflictual, distrustful, and a very risky political standoff in the global context in general and in South Asia in particular. Since Independence in 1947, India and Pakistan have been in four wars, including one undeclared war, and many border skirmishes and military stand-offs. It is doubtless that there are many reasons behind such political instability, but the Kashmir issue remains the primary factor that is problematic for the development of relations between the two nations. Both nations have fiercely contested Kashmir since the day they separated based on Hindu and Muslim populations. The largest Muslim group, situated in Kashmir, lies in the Indian territory. But the Pakistani government has long claimed that Kashmir belongs to it. Wars between Hindustan (India) and Pakistan in 1947-48 and 1965 failed to settle the matter. Although India won against Pakistan in 1971 the issue of Kashmir remains untouched. The control of the Siachen glacier, the acquisition of arms, and the nuclear program have also contributed to tensions between the two countries.

Although both countries have maintained a fragile ceasefire since 2003, they regularly exchange fire across the contested border, known as the Line of Control. In 2015, both governments reaffirmed their determination to implement the 1958 Nehru-Noon Agreement to establish peaceful conditions along the Indo-Pakistan border areas. This agreement relates to the exchange of enclaves in the east and the settling of the Hussainiwala and Suleiman disputes in the west. This is certainly good news for those who live in the enclaves, as it will expand access to basic amenities like education and clean water. It will finally secure the border and help stem widespread cross-border smuggling. Under the agreement, the inhabitants of the enclave can continue to reside at their current site or relocate to the country of their choice. If they remain, they will become nationals of the state in which the territories were transferred. Recent leadership changes have once again heightened tensions and have prompted international organizations to intervene in the disputes between India and Pakistan over Kashmir. But, as of late, both sides are showing interest to begin bilateral talks once again.

Bilateral trade relations have, over the past five decades, witnessed a chequered history, reflecting the changing dimensions of geopolitical tensions and diplomatic relations between the two countries. India and Pakistan have adopted a functionalist approach towards building cooperation; most of their bilateral treaties are related to non-security issues such as trade, telecommunications, transport, and technology. The two countries created a series of treaties to address bilateral relations, including the landmark Simla Agreement of 1972. The two countries also signed treaties for the resumption of trade, reset visa requirements, and resumed telegraph and postal exchanges. As India and Pakistan attempted to restore diplomatic and functional ties in the aftermath of the second war between them, they created several nested treaties. While the network of treaties has not reduced or eliminated cross-border violence between India and Pakistan, it does demonstrate the ability of states to find pockets of cooperation that can eventually spill over into other issue areas, thereby enhancing cooperation. For instance, even as the cross-border conflict unfolded, Indian and Pakistani diplomats were holding joint discussions to provide Indian pilgrims access to the Kartarpur Sikh shrine located inside Pakistan, and fortunately, the Kartarpur corridor was opened by Pakistani Prime Minister Imran Khan in November 2019 for Indian Sikh pilgrims.

Researchers, critics, and many think tanks strongly believe that the time is most opportune for the two neighboring countries of South Asia to overcome their past baggage and move forward with new hopes and aspirations to build an economically powerful bilateral relationship and forge the spirit of the common market. The major beneficiary of trade between India and Pakistan will be the consumer, due to reduced costs of production and economies of scale. These economic benefits will positively affect social indicators such as education, health, and nutrition.

Pakistan and India have only fifty-seven years of existence as separate countries as compared to about a thousand years of joint existence before the British rule. Their common identity revolves around aspects of shared history, geography, language, culture, values, and traditions. This shared cultural heritage is an opportunity to bind both countries, to overcome their recent history of war and rivalry. “On a recent visit to Pakistan, I experienced first-hand our sameness and, more importantly, the desire for peace that so many there spoke about, which I guess is a universal quality of the human heart. I came across several people but I did not see an enemy. They were people just like us. They spoke the same language, wore similar clothes, and looked like us,” says Priyanka Pandey, a young journalist from India.

At any cost, the peace process must be continued. A neutral posture should be adopted by Pakistani and Indian representatives. Certain Confidence Building Measures should be adopted by both sides. Ties at the diplomatic level and people-to-people contact should be enhanced more and more. Flexibility must be observed in dialogue to resolve major outstanding bilateral issues between both nations for a better future away from all the wars and rivalry. The two sides must do much more to address grievances and deal with the legacies of a half-century, instead of condemning the next generation to another 75 years of conflict and cold war tensions. They need to foster all forms of bilateral contact and improve the lives of Kashmiris, who have borne the worst of the conflict.

The internet provides a powerful vehicle for developing further dialogue and exchanging information, beyond the governmental level. Civil society groups have already used digital media with a fair measure of success. An online user-generated information repository for all peace activities between citizens of the two countries would further extend individual organizations’ ability to keep each other informed and plan their campaigns with better coordination to achieve maximum impact. Regular exchanges between the people of the two countries can create better understanding and goodwill. Recent initiatives, such as the exchanges of visits between federal and regional parliamentarians, are moves in the right direction and need to be sustained. The agreement for a liberalized visa regime is also a positive development.

There is more that unites India and Pakistan than divides them. Conflict resolution processes and building confidence measures must be continued. “Peace and reconciliation movements in India and Pakistan require further elaboration and empowerment. They work by rebuilding trust, and promoting understanding between people, helping to break down barriers caused by group polarization,” writes Dr. Volker Patent, a Chartered Psychologist and lecturer in the School of Psychology at The Open University. Next August will mark the 75th anniversary of the partition between India and Pakistan. Now is the time for the leaders of India and Pakistan to put aside all the anger, distrust, and sectarian and religious divides. Instead, we must work together to overcome our shared struggles as a species and as a planet, to tackle the climate crisis, reduce military expenditures, increase trade, and create a legacy together.