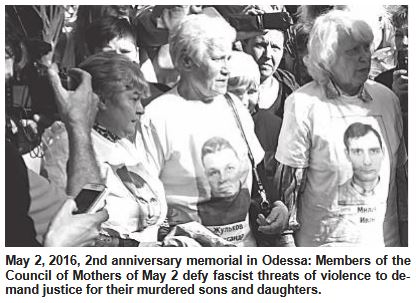 Three years ago, the U.S. government supported a violent right-wing coup in Ukraine carried out with the use of neo-Nazi paramilitary organizations. The pro-coup campaign was known as “Maidan,” for the city square in the capital city of Kiev where the anti-government assaults were carried out.

Less than three months later, on May 2, 2014, at least 46 mostly young people known as “Anti-Maidan” were murdered when a massive, fascist-led mob set fire to the House of Trade Unions in the Black Sea city of Odessa.

This Tuesday, May 2, 2017, Odessans will mark the third anniversary of this massacre by gathering at the site of the murders. They will lay flowers, sing songs, remember their dead and again raise their demand for an international investigation into the murders – a demand that has been continually blocked by the Ukrainian government.

And once again the fascist organizations are threatening to attack their memorial.

An urgent appeal from Odessa

“On the eve of the third anniversary of the events of May 2, 2014, the situation in Odessa is getting worse every day,” writes a supporter of the Council of Mothers of May 2, which represents the relatives of those who died at the House of Trade Unions.

“Ukrainian nationalists do their utmost to prevent a mass demonstration dedicated to the memory of the residents of Odessa who died on that day. To this end, the media started a campaign of intimidation against the people of Odessa, informing them about possible bloody provocations with the aim of ‘destabilizing the situation in the city.’

“And while previously these threats were raised mainly by professional organizers, this year floods of lies are being produced by representatives of official state institutions: Odessa prosecutors, officials of the Ministry of Internal Affairs, representatives of the military department. They are all warning about preparations for allegedly armed provocations on May 2 in Odessa.

“Apartments of anti-Maidan activists are being searched. To counter the peaceful mourning rally, a mobilization of ‘patriots’ has been declared. An atmosphere of fear, hysteria and expectation of a new tragedy is created in Odessa. Everything is aimed at intimidating, misleading and confusing people and eventually making them stay at home.

“In these conditions, we urge the world to closely monitor the situation in Odessa to prevent provocations from those forces that proved to the whole world three years ago their bloodlust and their desire to choose the most cruel and bloody ways.”

These threats of violence follow the arrests by federal police of several anti-fascist Odessans now falsely charged with serious crimes. Ominous reports are surfacing about plans to arrest more relatives and supporters and “extract confessions” of plans to commit violent acts against the government.

To support the courageous people of Odessa, the Odessa Solidarity Campaign called for an International Day of Solidarity with the People of Odessa, which took place on April 10, the 73rd anniversary of the day Odessa was liberated from years of fascist occupation. Actions took place in 20 cities in 13 countries across Europe and North America.

That solidarity must now continue.

Since the massacre of 2014, the continuing demand of Odessans for an international investigation has been a serious problem for the Ukrainian government. If the voices of these brave people are allowed to be silenced, Ukraine will have taken another huge step toward becoming a repressive police state in collusion with murderous fascist groups.

We urge all supporters of Freedom and Justice to contact the Ukrainian embassy in your country and demand:

Free all political prisoners in Ukraine!

Stop the repression against relatives & supporters of those killed on May 2, 2014!

No to fascism in Ukraine & all over the world!

For more information on the anti-fascist struggle in Odessa and what you can do to help, contact the Odessa Solidarity Campaign – www.odessasolidaritycampaign.org