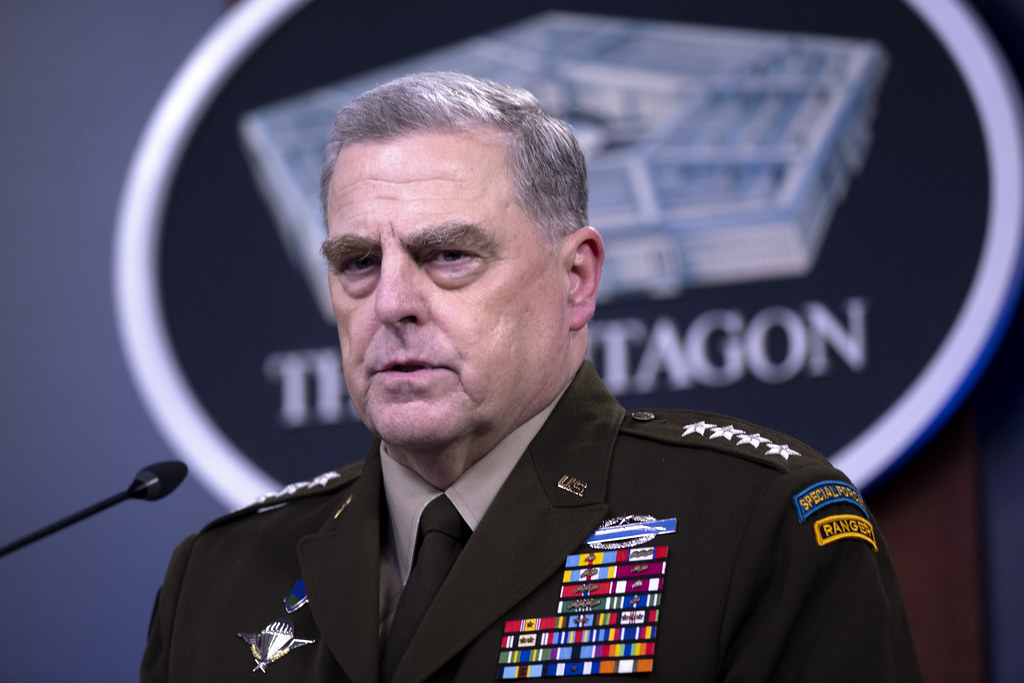 A week after President Harry Truman fired WWII war hero Gen. Douglas MacArthur in April 1951, MacArthur addressed a joint session of Congress with some self-pity about being overruled and under-appreciated by that civilian Truman: “Old soldiers never die – they just fade away.”

MacArthur had publicly criticized Truman for denying him permission to nuke “Red China” after it sent troops into Korea to fight U.S. troops there. That was in April 1951, 70 years ago. Truman explained: “I fired him because he wouldn’t respect the authority of the President…I didn’t fire him because he was a dumb son of a bitch, although he was.”

Given, comparisons can be invidious, but the most charitable explanation for the behavior of Chairman of the Joint Chiefs 4-star Gen. Gen. Mark Milley – and the explanation most often adduced by those who know him – is that he merits the sobriquet Truman gave to 5-star MacArthur. I tend to be less charitable, seeing Milley as insubordinate and duplicitous, and – most important – trying to illegally insert himself into the sensitive chain of command to authorize the use of nuclear weapons.

Milley has not denied the stunning revelations in the book “Peril” by Bob Woodward and Robert Costa. Aside from the almost incredible (but widely welcomed) report that Milley saw fit to warn his Chinese counterpart that he would give him a heads-up if an armed attack on China was coming, there is the equally astonishing revelation that Milley instructed senior Pentagon officials that he had to be involved in any discussions about launching nuclear weapons.

What’s wrong with that, asks The Atlantic. Good guy Milley was extremely worried about bad-guy Trump so he saved us all:

Milley also reportedly called together a group of senior US officers and made them affirm, one by one, that they understood that the procedure for the release of nuclear weapons had to include him. … Milley stayed within the lines, barely.“

I sought comment from Col. Douglas Macgregor to confirm my suspicion that The Atlantic is gilding the lily. What Milley did in trying to insert himself into the well established procedure for authorizing the use of nuclear weapons was highly irregular, probably illegal. The Chairman of the JCS has no operational role in this chain. Here’s what Macgregor told me today (POTUS, of course, is the President):

Nuclear chain runs from POTUS to SECDEF to CDR STRATCOM. Obviously, there are others that POTUS can consult, but as far as orders are concerned what’s above is accurate. POTUS would also have to grant authority for the use of any tactical weapon at sea or in the air. Again, Milley is the senior military advisor to POTUS. He can be consulted, but there is nothing in the law that requires his participation. Presumably, that’s why he insisted that he be involved.

Unlike Truman facing similar insubordination, President Biden on Wednesday expressed “full confidence” in Gen. Milley. Again, comparisons can be invidious, but Trump called him a “nut-job”.

As I tried to assimilate all this yesterday, I wrote this rough essay:

Talk about mixed emotions! Emotionally (and – needless to say – any analyst should try to avoid letting emotion color analysis), it is far too easy to breathe a sigh of relief and be thankful for what Milley apparently does not deny he did.

Put yourself in Putin’s of Xi’s shoes, however. Good God! If the top military can take steps to avoid implementing a lawful (however horrendous) order and this is allowed to stand as an honorable, praiseworthy precedent, well, this implies that the top military could quite possibly also provoke/launch nuclear war irrespective of the commander-in-chief. The Air Force tried to do this in the midst of the Cuban Missile Crisis, but sang froid in Moscow prevented the worst. There are still a lot of Curtis LeMays around.

If I were Putin, or Xi, I would feel compelled to prepare for the worst – the very worst. They already have ample evidence that the US military – and people like Donald Rumsfeld and Robert Gates – have controlled post-9/11 conventional wars; that a cease-fire in Syria, painstakingly negotiated over 11 months by Kerry and Lavrov, and personally authorized by Obama and Putin, was sabotaged a week later by the US AF.

Now Putin and XI have concrete evidence that this kind of insubordination extends to potential NUCLEAR conflict – and extends to the very top of the JCS. And Milley is seen as a good guy for what he did. Putin and XI, of course, have no guarantee that the current unrest in the US might usher in an even more dangerous “blood-soaked-arms-trader” Congress a year from now AND a second-term Trump.

What might an unchained military do to facilitate that? Would Trump try to ensure that Milley-type insubordination could not happen? Could he do that? Doubtful. A precedent has been set. Yes, the oath is to the Constitution; but the Constitution is quite clear that the President is commander-in-chief; the chair of the JCS is not. Keep thinking about what lessons XI and Putin might draw from all this.

What should Milley have done? Here’s an idea. RESIGN LOUDLY and set an example for ALL military below him and WARN the nation in very specific terms. Who knows, maybe his example would have led to resignations of others in the nuclear chain of command.

I am now remembering that business about Nancy Pelosi appealing to Milley to resist orders from Trump. That, in my view, compounds the constitutional problem.

Finally, Milley himself has been shown – on the frontpage of the NYTimes on 9/11/2021 – to be a crass liar. Here’s the headline: “Evidence Disputes US [Milley] Claim of ISIS Bomb in Kabul Drone Strike” – the one that killed seven children, an aid worker, et al. And the NYT coverage has included, twice, ample video for those who prefer to look-and-see rather than read. (This seems new, and significant, to me. There is crack in the NYT armor regarding Milley, which needs to be followed up on before it is glued close.)

In other words, in this context the MICIMATT now has an initial “M” with a somewhat compromised immune system, so to speak. The “M” might have to be exposed and trimmed at the top. Let me suggest that, at least with that front-page article on 9/11/21, the NYT may be aping the role of Caiaphas, the high priest beholden to an earlier Empire. “It’s better that one man die,” he is said to have explained: “Can’t you see that it’s to our advantage that one man die … rather than the whole nation be destroyed.” (“Nation” in that context meant the system of privilege enjoyed by collaborators with Rome – the high priests, lawyers, and the rest of the MICIMATT of that day.)

And yet, I get the impression that the manner in which rest of the media is exploiting the Woodward/Costa book may mean the MICIMATT is now closing ranks to include Milley himself as a “paragon of virtue.”

Let’s see how the corporate media now handle today’s news that Gen. Milley misled us all in claiming that the US drone strike in Kabul on August 29 was a “righteous” one, killing an ISIS operative. After launching the kind of investigation that normally takes the Pentagon months, it reported today that, no, it was 7 children an aid worker from a US nonprofit, and two others who were killed. The findings, already obvious to NY Times readers, came unusually quickly. If Biden lacks the courage to fire Milley, let’s us agitate to remove him – whether dumb, insubordinate, duplicitous – or all three.

I did an interview on the above on Friday.

Ray McGovern works with Tell the Word, a publishing arm of the ecumenical Church of the Saviour in inner-city Washington. His 27-year career as a CIA analyst includes serving as Chief of the Soviet Foreign Policy Branch and preparer/briefer of the President’s Daily Brief. He is co-founder of Veteran Intelligence Professionals for Sanity (VIPS).