Okinawa, Again – The U.S. Air Force and the U.S. Marines Have Poisoned Okinawa’s Water and Fish with Massive Releases of PFAS. Now it’s the Army’s Turn. 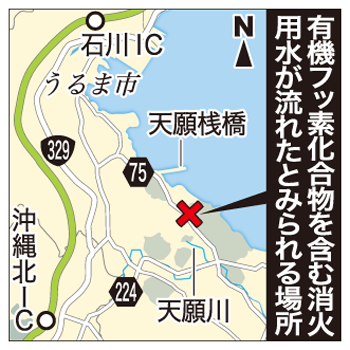 The red “X” shows “locations where firefighting water that contains organo-fluorine compounds (PFAS) is believed to have flowed.”   The spot marked with four characters above is “Tengan Pier.”

On June 10, 2021, 2,400 liters of  “firefighting water” containing PFAS (per-and poly fluoroalkyl substances) were accidentally released from the U.S. Army Oil Storage Facility in Uruma City and other nearby locations, according to Ryukyu Shimpo an Okinawan news agency. The Okinawa Defense Bureau said the toxic materials flowed out of the base due to heavy rain. The concentration of PFAS in the release is unknown while the Army is not forthcoming. The spill is believed to have emptied into the Tengan River and the sea.

During past investigations conducted by the prefecture, the Tengan River has been found to have high concentrations of PFAS.  Poisonous releases of toxic chemicals by the U.S. military are commonplace in Okinawa.

Consider how the latest spill is treated in the Okinawan press:

“On the evening of June 11, the Defense Bureau reported the incident to the prefectural government, Uruma City, Kanatake Town, and the fishermen’s cooperatives concerned, and asked the U.S. side to ensure safety management, prevent recurrence, and promptly report the incident. The Ministry of Foreign Affairs conveyed its regrets to the U.S. side on June 11. The Defense Bureau, the city government, and the prefectural police confirmed the site. Ryuko Shimpo  has inquired about the details of the incident to the U.S. military, but as of 10 P.M. on June11, there has been no response.”

If the Army responds, we know what they are likely to say. They will say they are concerned about the health and safety of Okinawans and are committed to ensuring safety management and making sure there’s no recurrence.  That’ll be the end of the story. Deal with it, Okinawa.

Okinawans are second-class Japanese citizens. The Japanese government has repeatedly demonstrated it cares little about the health and safety of Okinawans in the face of repeated toxic releases from U.S. bases. Although the small island of Okinawa comprises just 0.6% of Japan’s landmass, 70% of the land in Japan that is exclusive to U.S. forces is located there. Okinawa is about a third of the size of Long Island, New York, and has 32 American military facilities.

Okinawans eat a lot of fish that are contaminated by exorbitant levels of PFOS, a particularly deadly variety of PFAS that flows into surface waters from the American bases. It’s a crisis on the island, due to the high concentration of American military installations. Eating seafood is the primary source of human ingestion of PFAS. 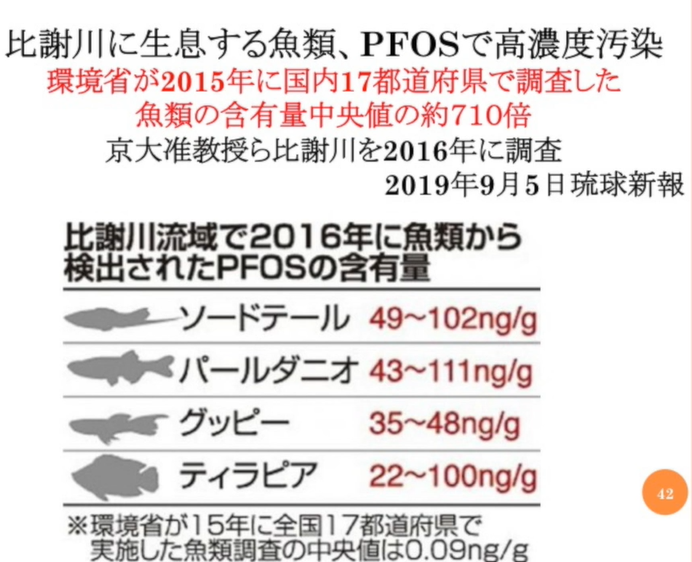 The four species listed above (from top to bottom) are swordtail, pearl danio, guppy, and tilapia.  (1 nanogram per gram, ng/g = 1,000 parts per trillion (ppt), so the swordtail contained 102,000 ppt)  The EPA recommends limiting PFAS in drinking water to 70 ppt.

In 2020, a fire suppression system in an aircraft hangar at Marine Corps Air Station Futenma discharged a massive volume of toxic firefighting foam. Foamy suds poured into a local river and cloud-like clumps of foam were seen floating more than a hundred feet above the ground and settling in residential playgrounds and neighborhoods.

The Marines were enjoying a barbecue  in a massive hangar outfitted with an overhead foam suppression system that apparently discharged when the smoke and heat were detected. Okinawan Governor Denny Tamaki said, “I truly have no words,” when he learned that a barbecue was the cause of the release.

And what would be an appropriate response from the Governor now? He could say, for example, “The Americans are poisoning us while the Japanese government is willing to sacrifice Okinawan lives for the never-ending U.S. military presence. 1945 was a long time ago and we’ve been victims since then. Clean up your mess, United States Forces Japan, and get out.” 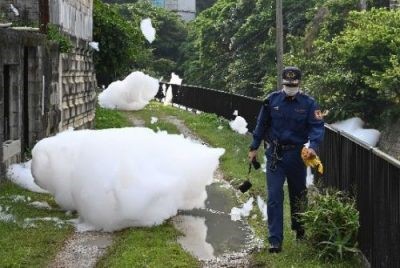 Giant carcinogenic foam puffs settled in residential neighborhoods near the Futenma Marine Corps base in Okinawa.

When pressed to comment, David Steele, commander of Futenma Air Base, shared his words of wisdom with the Okinawan public. He informed them that “if it rains, it will subside.” Apparently, he was referring to the bubbles, not the propensity of the foams to sicken people. A similar accident occurred at the same base in December of 2019 when a fire suppression system mistakenly discharged the carcinogenic foam.

In early 2021, the Okinawan government announced the groundwater in the area around the Marine Corps base contained a concentration of 2,000 ppt of PFAS.  Some U.S. states have regulations in place that prohibit groundwater from containing more than 20 ppt of PFAS, but this is occupied Okinawa.

“had almost no effect on humans.” Meanwhile, Ryukyo Shimpo newspaper sampled river water near the Futenma base and found  247.2 ppt. of PFOS/PFOA in the Uchidomari River (shown in blue.)  Seawater from Makiminato fishing port (top left) contained 41.0 ng/l of the toxins. The river had 13 varieties of PFAS that are contained in the military’s aqueous film-forming foam (AFFF). 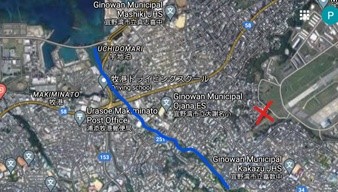 The foamy water flowed out of sewer pipes (red x)  from the Marine Corps Air Station Futenma. The runway is shown on the right. The Uchidomari River (in blue) carries the toxins to Makiminato on the East China Sea.

So, what does it mean that the water has 247.2 parts per trillion of PFAS?  It means people are getting sick. The Wisconsin Department of Natural Resources says surface water levels that exceed 2 ppt pose a threat to human health. The PFOS in the foams wildly bioaccumulate in aquatic life. The primary way people consume these chemicals is by eating fish. Wisconsin recently published fish data near Truax Air Force Base that shows PFAS levels remarkably close to the concentrations reported in Okinawa.

This is about human health and the extent to which people are being poisoned through the fish they eat.

In 2013, another accident at Kadena Air Base spread 2,270 liters of fire extinguishing agents out of an open hangar and into storm drains. A drunk Marine activated the overhead suppression system. The recent Army accident released 2,400 liters of the poisonous foam. 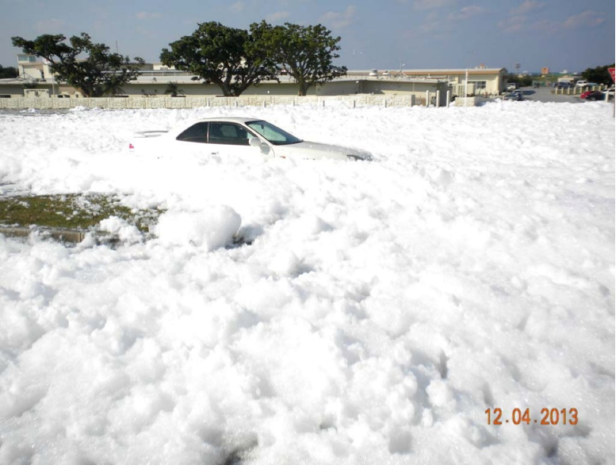 PFAS-laced foam fills Kadena Air Force Base, Okinawa in 2013. A teaspoon of the foam in this photo could poison an entire city’s drinking reservoir.

In early 2021 the Okinawan government reported that the groundwater outside of the base contained 3,000 ppt. of PFAS.  Groundwater drains into surface water, which then flows to the sea. This stuff doesn’t just disappear. It continues to run out of the base and the fish are poisoned. 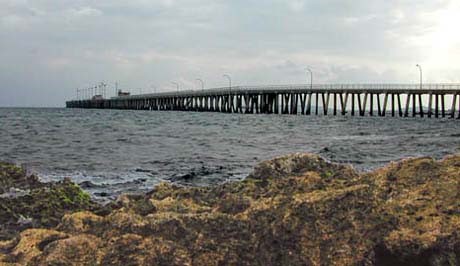 The Army’s Kin Wan Petroleum, Oil, and Lubricant storage facility in Uruma City is immediately adjacent to the pier, which is used to receive different types of weapons and ammunition. According to the commander of Fleet Operations Okinawa, “Tengan Pier is a popular off-base spot for surfers and swimmers. Located in Tengan Bay on the Pacific Ocean side of Okinawa, this particular spot offers one of the highest concentrations of marine life found anywhere in this region.”

That’s just swell. One problem:  U.S. military activities threaten the continued health of that very marine life, and the marine life of the ocean. In fact, the new base construction in Henoko threatens the ecosystem of coral reefs, the world’s first extinct ecosystem. Nuclear weapons may once again be stored in Henoko, if the base is ever completed. 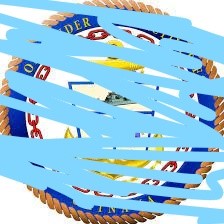 The Navy has threatened to prosecute
Military Poisons for using naval insignias.

Kin Wan receives, stores, and issues all aviation fuel, automotive gasoline, and diesel fuel used by the United States Forces on Okinawa. It operates and maintains a 100-mile petroleum pipeline system that reaches from Futenma Marine Corps Air Station in the south of the island, through Kadena Air Base, to Kin Wan.

This is the aorta of the heart of the American military presence in Okinawa.

U.S. military fuel depots like this around the world are known to have used vast quantities of PFAS chemicals since the early 1970s. Commercial fuel depots have largely stopped using the deadly foams, switching to equally capable and environmentally friendly fluorine-free foams.

TAKAHASHI Toshio is an environmental activist who lives adjacent to the Futenma Marine Corps base.  His experience in fighting to control noise levels from the airbase provides a valuable lesson in the necessity for resisting the Americans who are ruining his homeland.

He serves as the secretary of the Futenma U.S. Air Base Bombing Lawsuit Group. Since 2002, he has helped to prosecute a class-action lawsuit to end the noise pollution caused by U.S. military aircraft. The court ruled in 2010 and again in 2020 that the noise caused by the operation of U.S. military aircraft is illegal and beyond what is considered legally tolerable, that the Japanese government is also responsible for the damage caused to the residents and must financially compensate the residents.

Since the Japanese government does not have the authority to regulate the operation of U.S. military aircraft, Takahashi’s appeal for a “flight injunction” was rejected, and the damage caused by aircraft noise continues unabated. A third lawsuit is currently pending in Okinawa District Court. It is a large class action lawsuit with more than 5,000 plaintiffs claiming damage.

“After the Futenma foaming incident in April of 2020,” Takahashi explained,

the Japanese government (and the local government and residents) were unable to investigate the incident that occurred inside the U.S. military base. The

U.S. – Japan Status of Forces Agreement, or SOFA  gives priority to U.S. forces stationed in Japan and prevents the government from investigating the site of the PFAS contamination and the circumstances of the accident.”

Takahashi explained, “It has been shown that PFAS contamination causes cancer and can affect fetal development and cause disease in small children, so investigating the cause and cleaning up the contamination is essential in order to protect the lives of residents and fulfill our responsibility to future generations.”

Takahashi says he has heard that progress is being made in the U.S., where the military has investigated PFAS contamination and has assumed some degree of responsibility for the cleanup.  “This is not the case of U.S. troops stationed overseas,” he argues. “Such double standards are discriminatory and disrespectful to the host countries and to the regions where U.S. troops are stationed, and cannot be tolerated,” he said.

Thanks to Joseph Essertier, Coordinator of Japan for a World BEYOND War and Assistant Professor at the Nagoya Institute of Technology. Joseph helped with translations and editorial comments.