No to NATO — Yes to Peace FESTIVAL 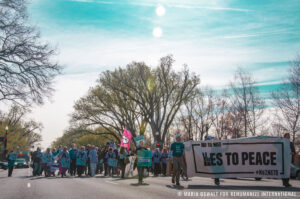 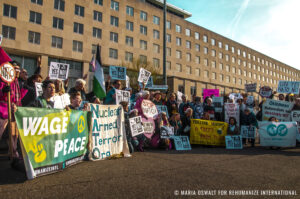 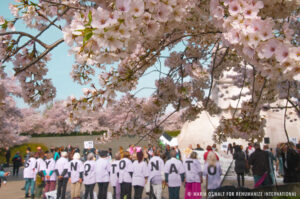 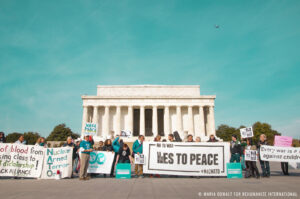 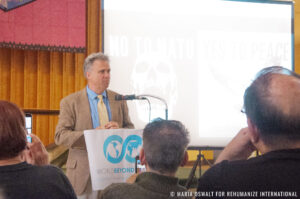 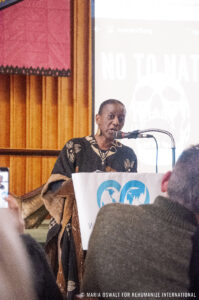 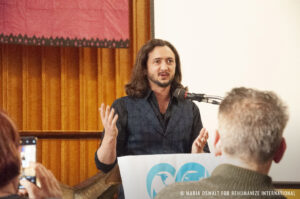 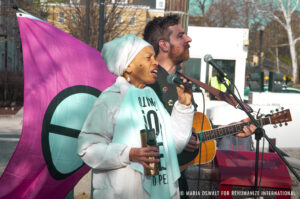 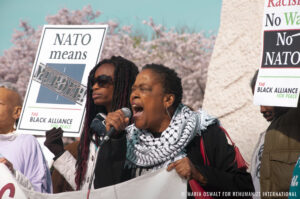 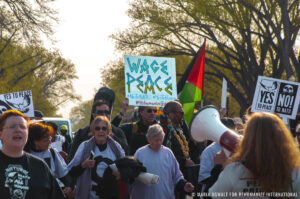 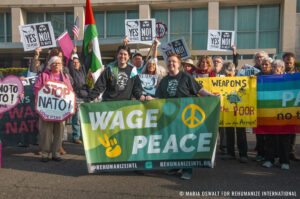 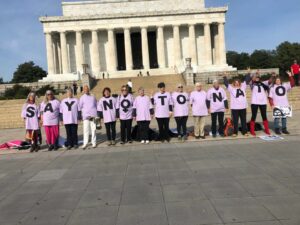 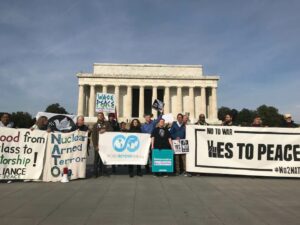 To participate in preparations on the 3rd for protests on the 4th, REGISTER.

The North Atlantic Treaty Organization (NATO) is coming to Washington, D.C., on April 4. We’re organizing a peace festival to unwelcome them.

Wednesday April 3: Bring No to NATO and Yes to Peace posters and meet from 8 a.m. to 9 a.m. at the Shepherd Statue at 13th & Pennsylvania Ave. in Freedom Plaza. Luci Murphy and Ben Grosscup will perform.  We’ll have an open mic, with attendees invited to speak for 5 minutes.  From there, we’ll walk several blocks to rally from 10 a.m. to 11 a.m. at the corner of Constitution Ave and Delaware Ave NE, next to the Russell Senate Office Building, near the U.S. Capitol where the head of NATO will be addressing a joint session at 11 a.m. Speakers will include Kristine Karch of the No to NATO Network, Ludo De Brabander from Vrede, Belgium, Reiner Braun, Co-president of the International Peace Bureau,  Joe Lombardo with the United National Antiwar Coalition (UNAC), and Ann Wright with Code Pink – Women for Peace. Music will be provided by Luci Murphy and Ben Grosscup.

Afterward, we’ll walk to the Union Station Metro. (Take the Red Line toward Shady Grove. Transfer to the Green Line at Gallery Place – to the  Columbia Heights Station.) From there, we’ll walk to St. Stephen’s Church, 1525 Newton St NW for the Peace Festival from Noon to 10:00 pm.  We will plan events for the State Department the next day.

REGISTER TO RESERVE YOUR SPOT.

Here is what NATO is doing. Here’s NATO’s schedule. Here’s another schedule from NATO.

To be in on the planning for the 4th, sign up for and attend the preparations on the 3rd.

We will gather at 7:30 a.m. at the Albert Einstein Memorial (2101 Constitution Ave NW) or across Constitution Ave if need be — very near where the NATO foreign ministers will be meeting. At 8:00 a.m. we’ll hear from our speakers and musicians outside the State Department, protest NATO, and greet meeting attendees. Speakers and musicians will include: Ben Grosscup, Luci Murphy, Megaciph, Art Laffin, Ludo De Brabander, Kristine Karch, Phil Wilayto, Medea Benjamin, Ann Wright.

Lodging for the nights of 2nd and 3rd is available.

Other No to NATO events elsewhere:
March 21-27: Solidarity trip to Belgrade
March 25: Canada out of NATO in Hamilton
March 27: Canada out of NATO in Toronto
March 30: Yes to Peace – No to NATO in Toronto
March 30: Conference and Rally in Saskatchewan
March 30: No to NATO action, Parliament Hill, Ottawa
March 30: Antiwar Protest in Minneapolis
March 30: Street Theater in Copenhagen
April 2: Protest at NATO in London
April 4: No to NATO events in Oslo, Norway
April 4: Break the Silence at Minnesota Capitol
April 4: Rally in Copenhagen
April 4: Rally in Aarhus, Denmark
April 7: Conference in Florence, Italy
Monthly: NATO protests in Toronto

Why? NATO is coming to DC to mark 70 years since its creation on April 4, 1949. NATO is the largest military alliance in the world with the largest military spending (roughly three-quarters of the world total) and nuclear stockpiles. While claiming to “preserve peace,” NATO has violated international law and bombed Bosnia and Herzegovina, Kosovo, Serbia, Afghanistan, Pakistan, and Libya. NATO has exacerbated tensions with Russia and increased the risk of nuclear apocalypse. The notion that supporting NATO is a way to cooperate with the world ignores superior non-deadly ways to cooperate with the world.

Our Message: War is a leading contributor to the growing global refugee and climate crises, the basis for the militarization of the police, a top cause of the erosion of civil liberties, and a catalyst for racism and bigotry. We’re calling for the abolition of NATO, the promotion of peace, the redirection of resources to human and environmental needs, and the demilitarization of our cultures. Instead of celebrating NATO’s 70th anniversary, we’re celebrating peace on April 4, in commemoration of Martin Luther King Jr.’s speech against war on April 4, 1967, as well as his assassination on April 4, 1968.

The Case Against NATO: 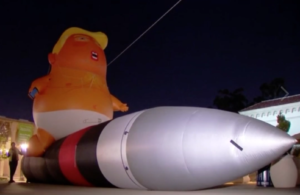 While Donald Trump once blurted out the obvious: that NATO is obsolete, he subsequently professed his commitment to NATO and began pressuring NATO members to buy more weapons. In fact, Trump has evicted Russian diplomats, sanctioned Russian officials, put missiles practically on Russia’s border, sent weapons into Ukraine, lobbied European nations to drop Russian energy deals, left the Iran agreement, torn up the INF Treaty, rejected Russia’s offers on banning weapons in space and banning cyberwar, expanded NATO eastward, added a NATO partner in Colombia, proposed adding Brazil, demanded and successfully moved most NATO members to buy significantly more weapons, splurged on more nukes, bombed Russians in Syria, overseen the largest war rehearsals in Europe in half a century, tried to overthrow the government of Venezuela and demanded that Russia stay out of Venezuela, condemned all proposals for a European military and insisted that Europe stick with NATO. Can one imagine a worse candidate about which to fantasize servitude to Vladimir Putin? Trump is meeting with the head of NATO on April 2nd at the White House.

The notion that somehow NATO is anti-Trump and therefore good would not only be silly and practically amoral on its own terms, and it is at odds with the facts of Trump’s behavior. We are planning an anti-NATO / pro-peace action at which opposition to the militarism of NATO’s dominant member is welcome and necessary. Here are the Top 10 Reasons Not to Love NATO no matter what Trump does. And here are Five Benefits of Life Without NATO. Read also: NATO’s Expensive Anniversaries.

NATO has pushed the weaponry and the hostility and the massive so-called war games right up to the border of Russia. NATO has waged aggressive wars far from the North Atlantic. NATO has added a partnership with Colombia, abandoning all pretense of its purpose being in the North Atlantic. NATO is used to free the U.S. Congress from the responsibility and the right to oversee the atrocities of U.S. wars. NATO is used as cover by NATO member governments to join U.S. wars under the pretense that they are somehow more legal or acceptable. NATO is used as cover to illegally and recklessly share nuclear weapons with supposedly non-nuclear nations. NATO is used to assign nations the responsibility to go to war if other nations go to war, and therefore to be prepared for war. NATO’s militarism threatens the earth’s environment. NATO’s wars fuel racism and bigotry and erode our civil liberties while draining our wealth.

NATO Expansion Over the Years: 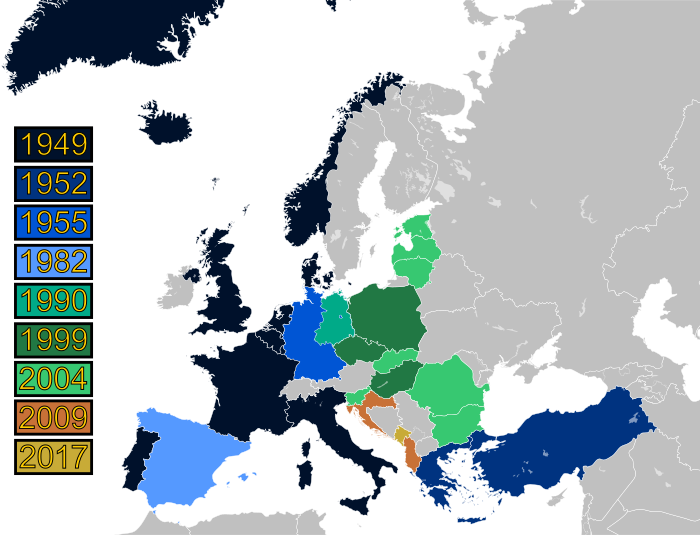 What’s planned:
(for Colombia or Brazil, see a larger map) 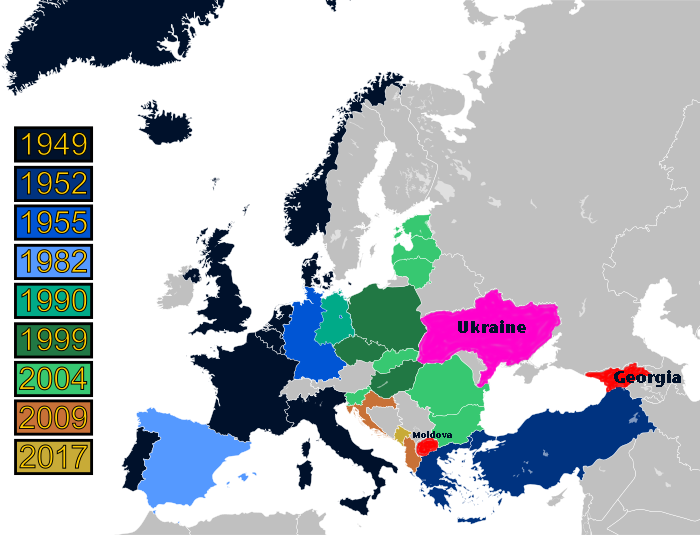 Read Pelosi and McConnell Cranking Up Bipartisan Madness for NATO

Read NATO is the obstacle to improving Russian-Western relations

Read a statement by No to War — No to NATO

Read a statement by the Coalition Against U.S. Foreign Military Bases

Read How Much Does the U.S. Pay for NATO?

Read 20 years later: the victims of NATO’s use of uranium weapons in the Balkans must finally be helped

We Stand with Gaza.

We must say: No to NATO, Yes to peace, Yes to prosperity, Yes to a sustainable environment, Yes to civil liberties, Yes to education, Yes to a culture of nonviolence and kindness and decency, Yes to remembering April 4th as a day associated with the work for peace of Martin Luther King Jr.

“As I have walked among the desperate, rejected, and angry young men, I have told them that Molotov cocktails and rifles would not solve their problems. I have tried to offer them my deepest compassion while maintaining my conviction that social change comes most meaningfully through nonviolent action. But they asked, and rightly so, ‘What about Vietnam?’ They asked if our own nation wasn’t using massive doses of violence to solve its problems, to bring about the changes it wanted. Their questions hit home, and I knew that I could never again raise my voice against the violence of the oppressed in the ghettos without having first spoken clearly to the greatest purveyor of violence in the world today: my own government. For the sake of those boys, for the sake of this government, for the sake of the hundreds of thousands trembling under our violence, I cannot be silent.” —MLK Jr.

“You can’t help people being right for the wrong reasons. This fear of finding oneself in bad company is not an expression of political purity. It is an expression of a lack of self confidence.” —Arthur Koestler

#NATO is the world’s strongest military alliance, but has it made the world safer, or more dangerous? Or do we even need NATO? Tune into #DCDirect with @AnaMariaGower and @worldbeyondwar pic.twitter.com/Lg4fgiEszp 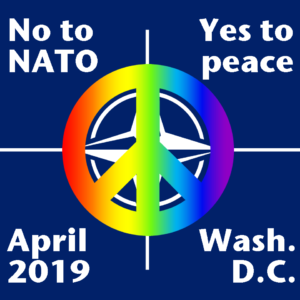 Spread the word on social media: