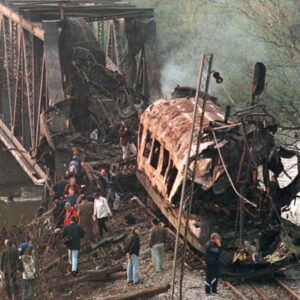 In April 2019, the North Atlantic Treaty Organization (NATO) will celebrate its 70th anniversary in Washington, D.C.

In view of the alliance’s war zone atrocities, attacks on civilians, civilian objects, and abuse of prisoners, anti-war demonstrations will greet what critics have dubbed this “Nuclear-Armed Terrorist Organization.”

NATO’s crimes, including the desecration and mutilation of corpses, bombing of
allied troops, torture of prisoners, and drone strikes on civilians, have fueled the recruitment of militants and even terrorists in Afghanistan, Pakistan, Iraq, Syria, Libya, Yemen, and Somalia.

On May 31, 2011, former Afghan President Hamid Karzai gave what he called his “last” warning against NATO’s bombing of Afghani homes saying, “If they continue their attacks on our houses … history shows what Afghans do with trespassers and with occupiers.”

While bombing Libya in March 2011, NATO refused to aid a group of 72 migrants adrift in the Mediterranean. Only nine people on board survived. The refusal was condemned as “criminal” by the Council of Europe.

In a Feb. 12, 2010 atrocity kept secret until March 13, U.S. Special Forces commandos killed a teenage girl, a pregnant mother of 10, a pregnant mother of six, a police officer and his brother, and are accused of trying to cover up the killings by digging bullets out of the victims’ bodies, washing the wounds with alcohol and lying to superior officers.

On April 12, 1999 during NATO’s Operation Allied Force, a U.S.-piloted F-15E attacked the railway bridge over the Juzna Morava River with two precision laser-guided AGM-130 missiles, both of which hit a five-car civilian passenger train that was crossing the bridge killing between 20 and 60 people. Amnesty International said the attack should have been stopped when the train was hit, and that the second bombing was a war crime.

On April 23, 1999, again during the unlawful war on Yugoslavia, NATO bombed the headquar- ters of Radio Televisija Srbije, the state-owned broadcasting system in Belgrade, destroying the building. Sixteen civilian employees were killed and 16 wounded. Amnesty International said the NATO bombing was a war crime, and Noam Chomsky called it an act of terrorism.

This article as PDF.