North Korea To Trump: Stop Threatening Us With Nuclear Attack

By Staff at www.zoominkorea.org, via Popular Resistance.

US Actions in North and South Korea Destabilizing the Region, Escalating Conflict 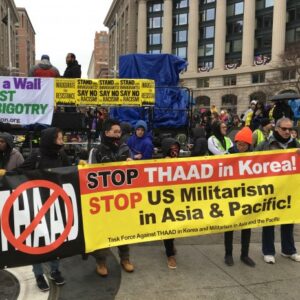 In the United States we rarely hear the side of the government in North Korea or the people of South Korea who feel threatened by US military attacks. North Korea in particular feels threatened regularly by massive war games twice each year that are simulated nuclear attacks on their country. When North Korea responds by testing a weapon people in the United States think they are unstable and dangerous because they do not realize they are responding to threats of US aggression.

In South Korea people feel threatened by the US placing weapons in their country. The current concern is the deployment of the THAAD missile system which is a threat to China. Just as missile systems on the European-Russia border deployed by the United States has led to an escalation of the threat of conflict and an arms race with Russia, the THAAD system will do the same with China and puts South Korea in the middle, a pawn in a nuclear power conflict.

When these current conflicts are put into the context of US history with Korea the actions of the United States are even more threatening. The first US effort to attack Korea was in the late 1800s and throughout the last century the US has been in conflict with the people of Korea. They refused to let them create their own democracy and instead installed a dictator after World War II and has continued to control the selection of Korean leaders since the Korean War. The US has refused to enter into a final peace treaty with North Korea since the end of the Korean War and has opposed any movements toward reunification between the north and south. The US  has escalated its mock attacks on North Korea, especially under President Obama and has continued to point missiles and advanced weaponry at North Korea. The people of the United States need to realize that the US military has been the aggressor in Korea and the media and government have been misleading us on the role our government is playing in destabilizing the region.

Below are two articles on the current issues.  KZ

This week, North Korean news outlets released public statements affirming that their country will test-launch an Intercontinental Ballistic Missile (ICBM) if the U.S. refuses to change its posture of hostility towards it. In Rodong Sinmun, North Korea’s Workers Party urged the new Trump administration to avoid making the same mistakes as the Obama administration. A headline in the newspaper read, “U.S. Must Learn from Obama Administration’s Failed DPRK Policy.”

The article in the Rodong Sinmun was referring to the failures of the Obama administration’s policy of so-called “strategic patience.” Rather than actively work towards establishing diplomatic relations with North Korea, the Obama administration opted to intensify economic sanctions and conduct provocative war exercises to pressure the country toward collapse. North Korea, however, never folded. On the contrary, it has increased its capacity to develop nuclear weapons and seems resolved to face the threats of the U.S. military head on.

In a rare interview with NBC News, North Korean official Choe Kang-il confirmed North Korea’s resolve to test-launch an ICBM to protest the upcoming US-South Korean combined military exercises known as Key Resolve Foal Eagle, scheduled to begin at the end of February. When asked what can be done to relieve the tensions in the region, Choe responded, “The U.S. can simply stop its nuclear war exercises, joint military exercises, which they have been conducting under our noses.”

Every year, the U.S. holds joint military exercises with the South Korean military in the spring (March and April) and summer (July or August). These exercises simulate preemptive strikes to eliminate the North Korean leadership and force North Korea to go to great lengths to prepare for war in defense. Choe went on to say:

The measures we take to strengthen our nuclear weapons capabilities are for the purpose of defending our sovereignty and managing the constant nuclear as well as general threats against our country… Think about this — what if our military went to Canada or Mexico to engage in nuclear war exercises with the intent of invading the U.S. How would Americans respond to that?

Trump has yet to respond directly to the statements of North Korea demanding an end to the U.S.’ joint military exercises with South Korea. On the day of his inauguration, however, Trump vowed to develop a missile defense system aimed at Iran and North Korea. Choe referred to such a statement as more “provocation.”

Despite Trump’s dismissal of North Korea’s claim, experts on U.S.-DPRK relations caution against this dangerous game of chicken and recommend the safer path of peaceful negotiations. Joel Wit and Richard Sokolsky recently wrote in Politico Magazine that the U.S. government should increase efforts to create opportunities for diplomatic talks with the North Korean leadership:

The danger is imminent, an effective strategy is needed and the menu of options is unpalatable. More sanctions will not work. The use of U.S. military force will be ineffective and carries great risks. And engineering regime change is a fool’s errand. Trump’s only realistic option for stopping North Korea’s nuclear march is this: reinvigorated diplomacy…

But time is also short, with new U.S.-South Korean Joint military exercises scheduled to start in February that could trigger a very strong North Korean response, particularly if those exercises are publicly portrayed, as they have been in the past, as practicing the decapitation of the North Korean leadership or include over-flights of American bombers capable of carrying nuclear weapons.

“Stop the U.S. war machine! From Iraq to Korea to the Philippines!” — that is what a group of anti-war peace activists chanted during an anti-Trump rally on the day of Donald Trump’s inauguration as the 45th U.S. president on January 20. They reminded progressive forces in the U.S. about international struggles opposing U.S. militarism, particularly in the Asia Pacific region and the Korean Peninsula.

Representatives of the Task Force to Stop THAAD in Korea and Militarism in Asia and the Pacific (Stop THAAD Task Force) joined the rally organized by the ANSWER Coalition at Navy Memorial Plaza in Washington DC. Standing with the hundreds of thousands gathered to  express opposition to the incoming Trump administration and all that it stands for, they demanded the U.S. rescind its plan to deploy the Terminal High Altitude Area Defense (THAAD) missile system in South Korea.

Will Griffin of Veterans for Peace (VFP), a member of the Stop THAAD Task Force, spoke about the danger of nuclear warfare, intensified by the deployment of U.S. missile defense systems around the world, including the THAAD missile system to be deployed in South Korea. Griffin pointed to the THAAD deployment as part of U.S.’ expansion of perpetual war, which only benefits the military industrial complex — “The U.S. military is leading and escalating nuclear warfare in this century… [The THAAD is] increasing tensions with North Korea, China, Russia… the U.S. military and its industrial complex do not care what happens to the rest of the world.”

David Li of the New York City-based Nodutdol for Korean Community Development, also a member of the Stop THAAD Task Force, paid tribute in spoken word to the South Korean people of Seongju County and Gimcheon City and their fight to stop the THAAD deployment. Li denounced the U.S. government for ignoring Seongju and Gimcheon residents’ demands to call off the THAAD deployment:

Why can’t you see the waves of candlelight,

From Seongju and Gimcheon shining bright.

To protect the peace, they carry on the fight,

So that YOUR war machine plan is no longer in sight.

We know whose interests YOU want to protect.

We know how you want to control and affect

The region to keep an eye and detect

Activities of your rivals — IN EFFECT,

To peel off the skin of your Asia Pivot,

We learn that it only continues to perpetually reject

The sovereignty of our people.

Li also questioned whether the THAAD system is really for defense:

Studies show that THAAD is NOT for defense.

So we vocalize nothing but the truth in defiance.

Don’t deny because we know this system is for offense,

And your grand trilateral military alliance,

Tying countries up conditioning them in reliance,

Hyun Lee, also a member of Nodutdol and the Stop THAAD Task Force, spoke about the history and current status of relations between the U.S. and North Korea.

Lee called on the U.S. government to find a peaceful resolution to the crisis on the Korean Peninsula and stop provoking war through military exercises that simulate the collapse of the North Korean regime. She spoke about the need — “now more than ever” — for a peace treaty to end the Korean War and called on U.S. activists and progressive-minded people to support the struggle of the Korean people against war and militarism:

She concluded by chanting, “End the Korean War! Peace treaty now! U.S. troops out of Korea!”

The Stop THAAD Task Force was one of many groups at the anti-Trump rally along the official parade route on the day of Trump’s inauguration. Various movements from across the country, from those fighting for the rights of immigrants, women and LGBTQs to labor and racial justice activists and peace and anti-war groups, coalesced on day one of Trump’s presidency and pledged to fight his right-wing agenda.