No War Should Be Called “Good” 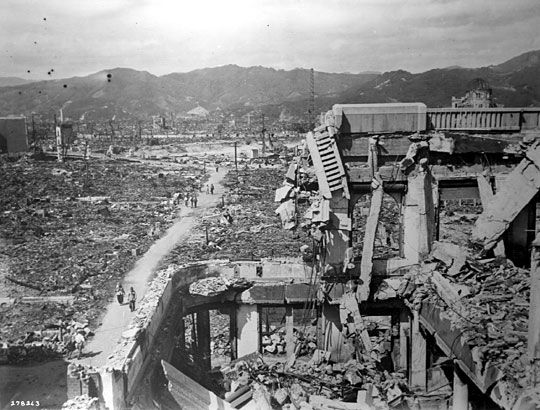 The nuclear bombs that were dropped on Hiroshima and Nagasaki 74 years ago this August 6th and 9th did not save lives. They took lives, possibly 200,000 of them.

The United States Strategic Bombing Survey concluded that, “… certainly prior to 31 December, 1945, and in all probability prior to 1 November, 1945, Japan would have surrendered even if the atomic bombs had not been dropped, even if Russia had not entered the war, and even if no invasion had been planned or contemplated.”

One dissenter who had expressed this same view to the Secretary of War prior to the bombings was General Dwight Eisenhower. Weeks before the first bomb was dropped, on July 13, 1945, Japan had sent a telegram to the Soviet Union expressing its desire to surrender and end the war. The United States had broken Japan’s codes and read the telegram. President Harry Truman referred in his diary to “the telegram from Jap Emperor asking for peace.”

That there was no good reason to drop nuclear bombs is only one of many uncomfortable facts about the traumatic series of events many refer to as the Good War.

Some major U.S. corporations traded with and profited from Nazi Germany right through World War II.

The Nazis, in their insanity, for years wanted to expel the Jews, not kill them — another insanity that came later. The U.S. government organized big conferences of the world’s nations that publicly agreed, for explicitly and shamelessly anti-Semitic reasons, not to accept the Jews. Peace activists pleaded with the U.S. and British governments right through the course of the war to negotiate the removal of Jews and other targets from Germany to save their lives and were told it just wasn’t a priority.

Within hours of the end of the war in Europe, Winston Churchill and various U.S. generals were proposing a war on Russia using German troops, and the Cold War was begun using Nazi scientists.

Peace activists had been protesting the build up to a war with Japan since the 1930s. President Franklin Roosevelt had promised Prime Minister Winston Churchill to try to provoke Japan as a means of getting the United States into the war in Europe. Prior to Pearl Harbor, Roosevelt built up bases in the U.S. and multiple oceans, traded weapons to the Brits for bases, started the draft, created a list of every Japanese American person in the country, provided planes, trainers, and pilots to China, imposed harsh sanctions on Japan, and advised the U.S. military that a war with Japan was beginning.

The reason we call all of that the Good War is the general agreement on how bad so many wars have been since, and the incredible resources we are asked to dump every year into waging and preparing for wars.

What if we were to begin questioning the idea that a war can be good? We don’t speak of just rape or humanitarian child abuse. Must we go on forever supposing that war can be properly conducted?

What if we don’t begin questioning war and continue producing and deploying nuclear weapons, hoping that our luck holds out and that the things are never intentionally or accidentally launched?

David Swanson, executive director of World BEYOND War, will be speaking at the Ground Zero Center in Poulsbo on August 4 and the From Hiroshima to Hope event in Seattle on August 6.