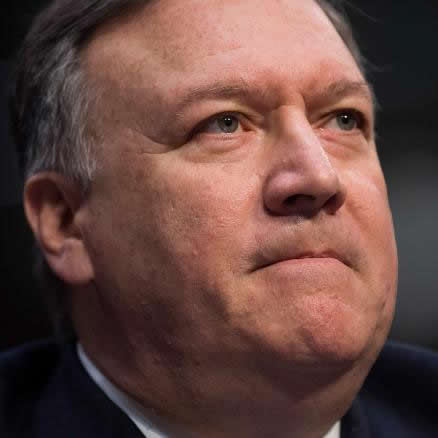 We are writing to express our strongest opposition to the nomination of Mike Pompeo as Secretary of State. Our organizations collectively represent tens of millions of people across the United States.

Pompeo promotes principles and policies that are antithetical to American values. His repeated advocacy for war, Islamophobia, climate change denial, hostility to human rights, including reproductive and LGBT rights, and support for torture make him dangerous and unfit to be a chief architect of U.S. foreign policy.

More War:
Pompeo’s clear preference for war over diplomacy fundamentally disqualifies him from serving as America’s top
diplomat. Pompeo’s seeming hunger for war with Iran, threats of military intervention in North Korea, desire to tear up the Iran nuclear agreement, and support for ongoing unauthorized conflicts like that in Yemen shows a reckless disregard
for U.S. national security, contradicts the position of many U.S. military leaders, and threatens the lives of many civilians and U.S. soldiers.

Climate Change Denial:
Pompeo’s denial of climate change poses a fundamental threat to our planet and the future of our species. Without strong U.S. leadership, climate change will wreak havoc upon millions of people inside and outside the U.S.

Opposing Reproductive Health:
Pompeo has never missed an opportunity to attack reproductive health. Pompeo is fundamentally out of line with U.S. values and foreign policy goals of promoting gender equality and the health of women and communities around the
world.

Anti-LGBT Hate:
Pompeo is an ally of designated anti-LGBT hate groups and supports discrimination against LGBT people, which fundamentally disqualifies him from representing U.S. support for human rights on the world stage.

Islamophobia:
Pompeo’s repeated, unabashed promotion of anti-Muslim bigotry is repugnant. He is deeply rooted in the organized anti-Muslim hate movement, having not only hosted and accepted an award from an anti-Muslim hate group, but personally called for collective blame of Muslims after acts of mass violence. America’s top diplomat should not be a vehicle for Islamophobia or any other form of bigotry.

Defending Torture:
Pompeo’s defense of torture, including waterboarding, is abhorrent and should be categorically rejected. His words offer other repressive governments a justification for their own brutality.

Make no mistake: President Donald Trump is assembling a War Cabinet with Mike Pompeo at the helm. Our concerns are only further heightened with the recent appointment of John Bolton as National Security Advisor, a man who shares many of the same dangerous and disturbing policies and positions as Pompeo. There is no doubt that the Senate would have blocked the nomination of Ambassador Bolton to any Senate-confirmable position, and they must not now
allow his radical and extreme agenda to be implemented by having Mike Pompeo join him in Donald Trump’s cabinet.

After two costly, bloody wars in Iraq and Afghanistan, it would be a national folly to put advocates for another major war in charge of U.S. foreign policy. The costs would be devastating for civilians around the world, U.S. soldiers sent to war, and our national treasury. To preserve America’s global standing and advance our national interests, U.S leaders must champion human rights and continue to promote global development and diplomacy.

Pompeo is unfit to serve as Secretary of State. We urge you to oppose and reject his nomination.