New Educational Projects Are in the Works

Bolivian Catholic University (Universidad Católica Boliviana)
UCB is looking to co-create a new initiative, focussed on supporting work towards a culture of peace in more structured/systematic ways. We have been working together for several months to co-create a plan that has several phases. The overall objective of this work is to provide capacity-building opportunities for students, administration, and professors across the five university sites in Bolivia (Cochabamba, El Alto, La Paz, Santa Cruz, and Tarija).  Phase One will start with work in La Paz and aims to:

1) train up to 100 participants around issues related to a culture of peace
This work will take the form of a 6-week in-person training, comprised of three, two-hour sessions per week. The training will start in September. Two colleagues and I will co-design the curriculum. It will draw on content and materials from World BEYOND War’s AGSS as well as from peace studies, youth work, psychology, and related fields.

2) Support participants to design, implement, and evaluate their own peace projects
Participants will work in small groups to carry out their projects within 4-weeks.  The projects will be context-specific, yet framed within one of the AGSS’ broad strategies.

This work builds on many years of work with the university. I have taught psychology, education, and political science students at UCB. I have also advised on the creation of and taught on the Masters in Democracy, Human Rights and a Culture of Peace.

Konrad Adenauer Foundation (KAS)
KAS are working on their strategic plan for the coming year and inviting me to join them to discuss possible peacebuilding collaborations. Specifically, they wanted to know about the recent work in Bosnia (this was funded by KAS in Europe). We discussed ideas around a training for young leaders in 2023. We also discussed updating the book that I wrote some years back, and having an event alongside the training next year with several speakers.

National Chamber of Commerce – Bolivia (NCC-Bolivia)
NCC-Bolivia is wanting to do something around a culture of peace in the private sector.  We met online to discuss possible areas for collaboration including introductory webinars this year to introduce the organisations they work with across Bolivia (including Coca Cola etc) to topics of peace and conflict. In an attempt to support this work, they have set up a national committee and aim to invite others across the country to join. I am one of the founding members of the committee and will serve as the Vice-President.

This work grew out of a series of conversations, over the course of a year, and an online event that has more than 19,000 view. 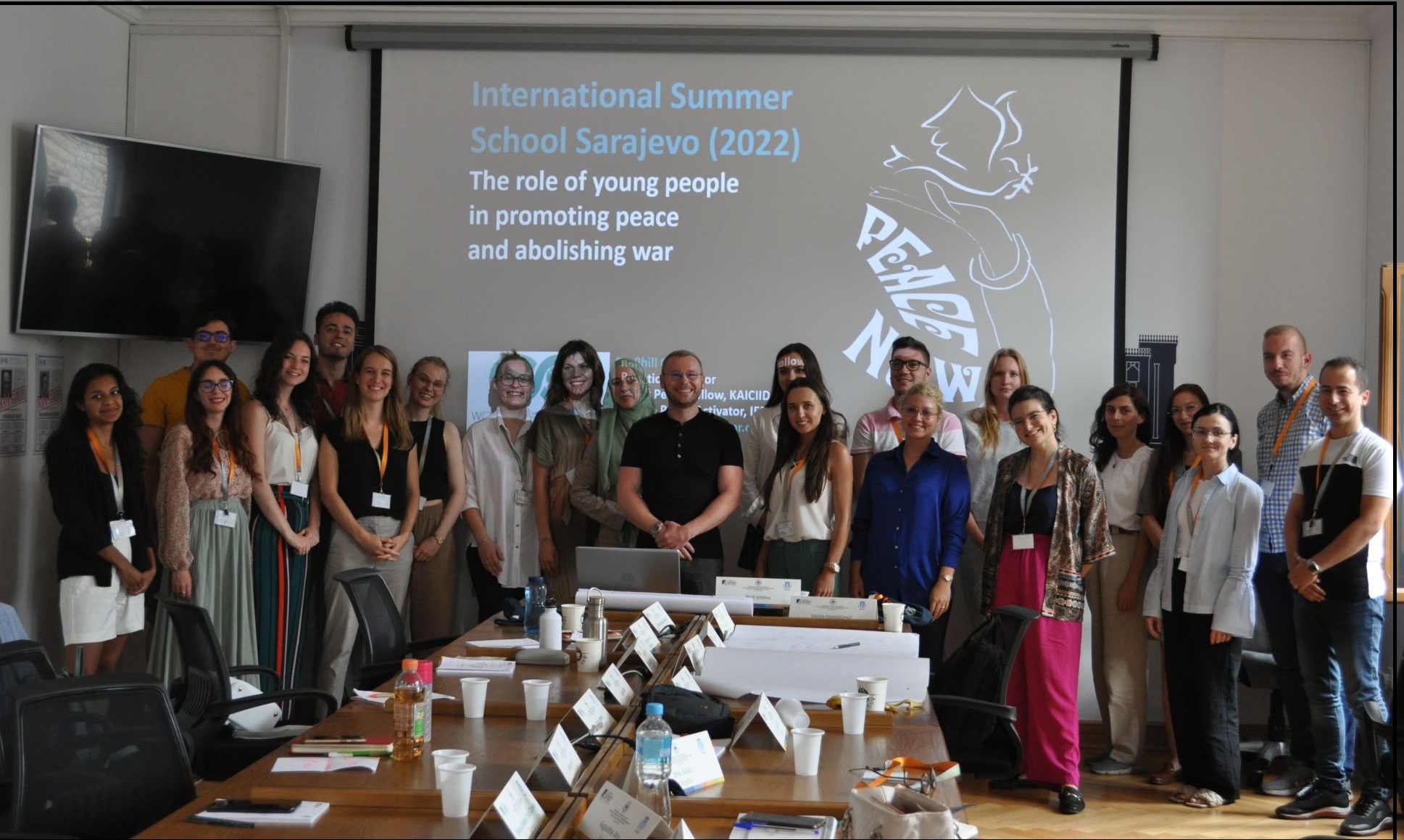 In addition, here is a report on recent activities in Bosnia and Herzegovina:

This report documents activities undertaken in Bosnia and Herzegovina & Croatia (July 26 – August 1, 2022). These activities included a visit to Srebrenica Memorial Centre, facilitating educational workshops, moderating/speaking on a conference panel, and presenting at an academic conference.

Here are more details about each of these activities in turn:

Bosnia and Herzegovina (Srebrenica and Sarajevo)

Visit to the Srebrenica Memorial Centre which aims at “preserving the history of the genocide in Srebrenica as well as combatting the forces of ignorance and hatred which make genocide possible.” Srebrenica is a town and municipality located in the easternmost part of Republika Srpska, an entity of Bosnia and Herzegovina. The Srebrenica massacre, also known as the Srebrenica genocide, happened in July 1995, killing more than 8,000 Bosniak Muslim men and boys in and around the town of Srebrenica, during the Bosnian War (Wikipedia).

Facilitation of x2 90-minute workshops aimed at addressing, “The Role of Young People in Promoting Peace and Abolishing War”. The workshops were divided into two parts:

·       Part I culminated in the co-creation of elevator pitches related to youth, peace, and war.

Specifically, young people worked in smalls groups (between 4 and 6 per group) to co-create 1-3 minute elevators pitches, aimed at addressing; 1) why peace is important; 2) why war abolition is important; and 3) why the role of young people in promoting peace and abolishing war is important. After young people presented their elevator pitches, they were given feedback from their peers. This was followed by a presentation by myself, where I made the case for why there is no viable approach to sustaining peace without the abolition of war; and the role of young people in such efforts. In doing so, I introduced World BEYOND War and its work including the Youth Network. This presentation generated lots of interest/questions.

°       The first was to engage participants in a future imaging activity. Here young people were taken through a visualisation activity to envision future alternatives, drawing on the work on Elise Boulding and Eugene Gendlin. Young people from Ukraine, Bosnia, and Serbia shared powerful reflections on what a world beyond war would look like for them.

°       The second purpose was to reflect together on the challenges and opportunities facing young people in terms of their role in promoting peace and abolishing war.

This work was part of the 17th edition of the International Summer School Sarajevo. This year’s focus was on “The Role of Transitional Justice in Rebuilding Human Rights and Rule of Law in Post-Conflict Societies”. 25 young people from 17 countries participated. These included: Albania, Bosnia and Herzegovina, Bulgaria, Canada, Croatia, Czechia, Finland, France, Germany, Italy, Mexico, the Netherlands, North Macedonia, Romania, Serbia, Ukraine and the United Kingdom. Young people were drawn from a wide range of different disciplines including: economy, political science, law, international relations, security, diplomacy, peace and war studies, development studies, humanitarian aid, human rights, and business, among others.

The workshops took place at the Sarajevo City Hall.

Invitation to moderate and speak on a panel. My fellow panellists – Ana Alibegova (North Macedonia) and Alenka Antlogaa (Slovenia) – addressed issues of good governance and electoral processes, receptively. My talk, “The Path to Peace and Sustainable Development: Why we must Abolish War and how”, made the case for why the abolition of war is one of the largest, most global and important challenges, facing humanity. By doing so, I introduced the work of World BEYOND War and discussed how we are working with others towards the abolition of war.

This work was part of the “International Summer School Sarajevo 15 Year Alumni Conference: “The Role of Transitional Justice Today: What Lesson Can Be Drawn to Prevent Future Conflicts and to Assist Societies After Conflict”.

The event took place at the Parliamentary Assembly of Bosnia and Herzegovina in Sarajevo.

ISSS is now in its 17th edition. It brings young people together from around the world for 10 days in Sarajevo, to engage in the theoretical and practical aspects of the importance and the role of human rights and transitional justice. Participants are future decision makers, young leaders and professionals in academia, NGOs and government trying to make a change worldwide.

Click here to read more about the summer school: https://pravnik-online.info/v2/

I would like to thank Adnan Kadribasic, Almin Skrijelj, and Sunčica Đukanović for organising and inviting me to take part in these important and impactful activities.

I had the honour to present at an International Conference – “The Future of Peace – The Role of the Academic Community in Promoting Peace” – jointly organised by the University of Zagreb, the Croatian Roman Club Association, and the Inter University Center Dubrovnik.

This presentation shared a pilot collaborative project between Adelphi University Innovation Center (IC), Intro to Peace Studies class, and a non-profit organisation, World BEYOND War (WBW), where student final projects consisting of lesson plans and webinars were provided as “deliverables” to WBW. Students learned about peacemakers and peacebuilding; then engaged in peacebuilding themselves. This model is a win-win-win for universities, industry partners, and most importantly, for students learning to bridge theory and practice in Peace Studies.

The conference had 50 participants and speakers from 22 countries around the world.

Speakers addressed a range of issues relevant to peace – from responsibility to protect, human rights, and international law to mental health, injuries, and trauma; and from polio eradication and anti-system movements to the role of music, truth, and NGOs in peace and war.

Perspectives on war and war abolition varied. Some spoke about being against all war, while others suggested that some wars might be just. Take, for example, one speaker who shared how “we might need a Cold War II to prevent a Third World War”. Related, another speaker shared plans within Europe for an ‘Armed Force Group’ to complement NATO.

Click here to read more about the conference: https://iuc.hr/programme/1679

I would like to thank Professor Goran Bandov for organising and inviting me to this conference.