Murders And Humiliations Of Armenians By Azerbaijani Armed Forces 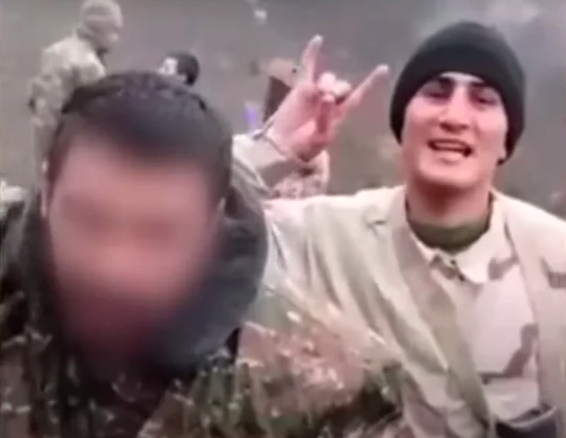 Translated for World BEYOND War by Tatevik Torosyan

YEREVAN, November 25. News-Armenia. Objective evidence has been obtained of the murder and torture of Armenian prisoners of war and civilians held by the Azerbaijani armed forces, as well as cruel, inhuman and degrading treatment with them, the press service of the Armenian Prosecutor General’s Office reported.

It is noted that as a result of the undertaken operational-search measures, investigative and other procedural actions in order to check publications on the network and the media, sufficient evidence was obtained that during the military conflict, the Armed Forces of Azerbaijan committed gross violations of a number of norms of international humanitarian law. …

In particular, the Azerbaijani side violated the provisions of the Additional Protocol to the Geneva Conventions of August 12, 1949, concerning the protection of victims of international armed conflicts, and Customary International Humanitarian Law.

In particular, on October 16, 2020, the servicemen of the Armed Forces of Azerbaijan called from the number of prisoners of war N.B. his relative and said that they would behead the prisoner and publish a photo on the Internet. A few hours later, the relatives saw a photo of the killed prisoner of war on his page on the social network.

During the hostilities, servicemen of the Azerbaijani Armed Forces forcibly took out a resident of the city of Hadrut M.M. and against his will was transported to Azerbaijan, where, subjecting him to inhuman treatment and torture, they killed him.

On various pages on the Internet there are many videos showing how a man in military uniform and with the flag of Azerbaijan on his shoulders shot the wounded prisoner of war A.M., the servicemen of the Azerbaijani Armed Forces cut off the head of an Armenian prisoner of war and put it on the belly of some animal, shot from a submachine gun into the prisoner’s head, ridiculed him, striking him on the head, cut off the ear of the prisoner and a civilian, presenting him as an Armenian spy. They mocked three Armenian prisoners of war, forcing them to applaud themselves on their knees. Also, Azerbaijani soldiers captured Armenian soldiers, one of whom was kicked and forced to kiss the Azerbaijani flag, hitting on the head.

Five prisoners of war, among whom were wounded, were beaten with a skewer, and they also agreed to cut off one of their hands; dragged an elderly man in civilian clothes, hitting him on the back; insulted a prisoner of war lying on the ground and at the same time shook him by the chest.

According to the video recording obtained as a result of the investigative and operational-search measures, a serviceman of the Azerbaijani Armed Forces, putting his foot on the head of a wounded prisoner of war, forced him to say in Azerbaijani: “Karabakh belongs to Azerbaijan.”

Another video shows how the Azerbaijani Armed Forces captured two civilians: a resident of Hadrut, born in 1947, and a resident of Taik village, Hadrut district, born in 1995. According to the following video, representatives of the Azerbaijani Armed Forces opened fire on Artur Mkrtchyan Street in the city of Hadrut and killed two people wrapped in an Armenian flag and defenseless.

On October 19, servicemen of the Armed Forces of Azerbaijan from the phone of prisoner of war S.A. through the WhatsApp application sent a message to his friend that he was in captivity. On October 21, another friend of S.A. noticed a video on TikTok, which shows that a prisoner of war was beaten and forced to voice offensive statements about the Prime Minister of Armenia.

On the morning of October 16, a group of servicemen of the Azerbaijani Armed Forces broke into the apartment of a resident of Hadrut Zh.B. and, using violence against the woman and dragging her by the hands, they put her in a car against her will and took her to Baku. After 12 days of violent detention on October 28, she was extradited to Armenia through the mediation of the International Committee of the Red Cross.

According to the video on the Hraparak.am website, the Azerbaijani Armed Forces beat 3 prisoners of war.

The data on all these cases are verified in the proper legal order, in connection with them, the necessary procedural actions were carried out to supplement the evidence for crimes committed by the Armed Forces of Azerbaijan, provide grounds for giving tough criminal-legal assessments, identifying and prosecuting persons who committed the crime …

According to the assessment of the sufficient objective evidence already obtained, it has been proved that the responsible officials of the Azerbaijani Armed Forces committed grave crimes against numerous Armenian servicemen on the basis of national hatred and centralized power.

The General Prosecutor’s Office of the Republic of Armenia takes measures to inform the international partner prosecutorial bodies of the facts of atrocities committed against, in some cases, wounded Armenian prisoners of war and civilians in the Republic of Azerbaijan in order to ensure criminal prosecution and conviction, as well as create additional guarantees for the protection of victims.

On the situation with Armenian Prisoners

On November 21, the ombudsman of Armenia and Artsakh completed the 4th closed report on the atrocities committed by the Azerbaijani Armed Forces against the captured ethnic Armenians and the bodies of those killed in the period from 4 to 18 November. The report contains evidence and analytical materials confirming the Azerbaijani policy of ethnic cleansing and genocide through terrorist methods in Artsakh.

On November 23, lawyers Artak Zeynalyan and Siranush Sahakyan, who represent the interests of Armenian prisoners of war at the European Court of Human Rights (ECHR), published the names of Armenian servicemen who were captured by Azerbaijan as a result of the large-scale military actions unleashed by Azerbaijan against Artsakh on September 27

Armenia appealed to the ECHR on the issue of 19 prisoners (9 military personnel and 10 civilians) who were taken prisoner after the ceasefire on the Goris-Berdzor road.

Videos of humiliation of prisoners of war and civilians of Armenian origin by the Azerbaijani Armed Forces are periodically published on the network. This is how the footage of Azerbaijanis’ abuse of the 18-year-old Armenian soldier was published. The head of the parliamentary commission for the protection of human rights, Naira Zohrabyan, appealed to a number of international authorities regarding the captured Armenian soldier.

About the war in Artsakh

From September 27 to November 9, the Azerbaijani Armed Forces, with the participation of Turkey and foreign mercenaries and terrorists recruited by it, carried out aggression against Artsakh at the front and in the rear using rocket and artillery weapons, heavy armored vehicles, military aircraft and prohibited types of weapons (cluster bombs, phosphorus weapons) … The strikes were delivered, inter alia, at civilian and military targets on the territory of Armenia.

On November 9, the leaders of the Russian Federation, Azerbaijan and Armenia signed a statement on the cessation of all hostilities in Artsakh. According to the document, the parties stop at their positions; The city of Shushi, Aghdam, Kelbajar and Lachin regions pass to Azerbaijan, with the exception of a 5-kilometer corridor connecting Karabakh with Armenia. A Russian peacekeeping contingent will be deployed along the contact line in Karabakh and along the Lachin corridor. Internally displaced persons and refugees are returning to Karabakh and adjacent regions, prisoners of war, hostages and other detained persons and bodies of the dead are exchanged.