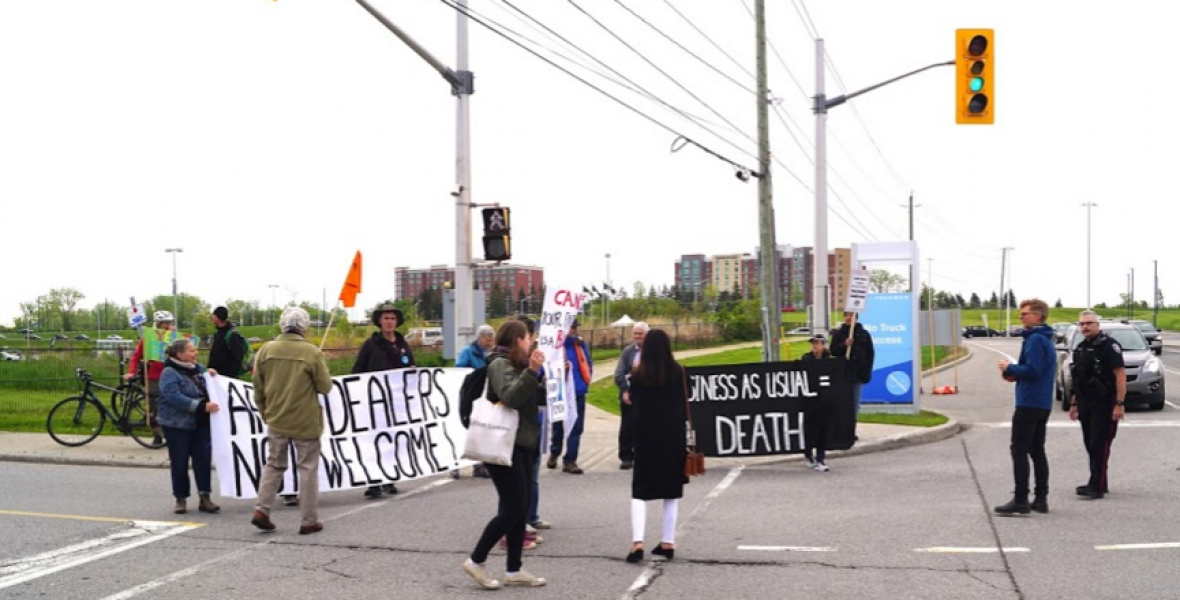 It’s still not known for sure if the annual CANSEC arms show will take place as planned from May 27-28 in Ottawa.

Despite the World Health Organization declaring the coronavirus outbreak a pandemic on March 11, the Ottawa Citizen reported on March 12 that, “The military equipment trade show, CANSEC 2020, expected to attract around 12,000 visitors to the EY Centre in Ottawa, will still proceed, according to the Canadian Association of Defence and Security Industries [CADSI], which organizes the event.”

That news prompted this article on rabble.ca, this letter to the editor by peace activist Jo Wood in the Ottawa Citizen, this open letter signed by several organizations, including PBI-Canada, and this online petition by World Beyond War, a global nonviolent movement to end war.

Then on March 13, CADSI issued this statement: “CADSI will have updated information on the status of our upcoming events, including CANSEC, on April 1st.”

There are growing indications that CANSEC will not happen as scheduled.

On March 15, Prime Minister Justin Trudeau stated that Canada would close its border to those who are not Canadian citizens or permanent residents. CADSI had boasted that delegations from 55 countries would be present at its arms show.

Furthermore, Global News reported on March 17, “The border between Canada and the U.S. will be temporarily closed to non-essential traffic.” The United States is the largest buyer of Canadian-made armaments and technology.

And as of March 18, only four airports (Toronto, Vancouver, Calgary and Montreal) will receive international flights. That means direct flights from outside the country to the Ottawa International Airport are not available for the time being.

Additionally, it appears that Ottawa Special Events, an event production company, expects most events at the EY Centre to be suspended or cancelled.

On March 16, Ottawa Matters reported, “Ottawa Special Events is laying off 16 of its 21 full-time employees as local COVID-19-related event cancellations and suspensions continue to affect the business.”

That article highlights, “Partner Michael Wood [says he] expects the majority [of the] upcoming events [he and his crew] would be scheduled to work at the Shaw Centre and EY Centre to be either suspended or cancelled.”

And on March 16, Mayor Jim Watson, who had previously issued this welcome to CANSEC delegates, tweeted, “@ottawahealth has accepted the recommendation from the Province’s Chief Medical Officer of Health that all bars, theatres and entertainment venues should close temporarily, and that restaurants limit operations to take-out and delivery.”

Given the increase in cases of coronavirus is sadly not expected to peak until late-April/early-May or later, it’s not likely that CADSI will be able to do anything else on April 1 other than postpone its arms show for months or reschedule to May 2021.

Please join with others and help to make space for peace by signing this petition that calls on Prime Minister Trudeau, Mayor Watson, CADSI president Christyn Cianfarani and others to #CancelCANSEC given the pandemic.

Meanwhile, work will continue to have CANSEC permanently cancelled, for all weapons shows to be banned, for Canada to stop the production of military-grade weapons and for military spending to be redirected to human and environmental needs.