We Fixed Your Ad for You, Lockheed Martin. You’re Welcome. 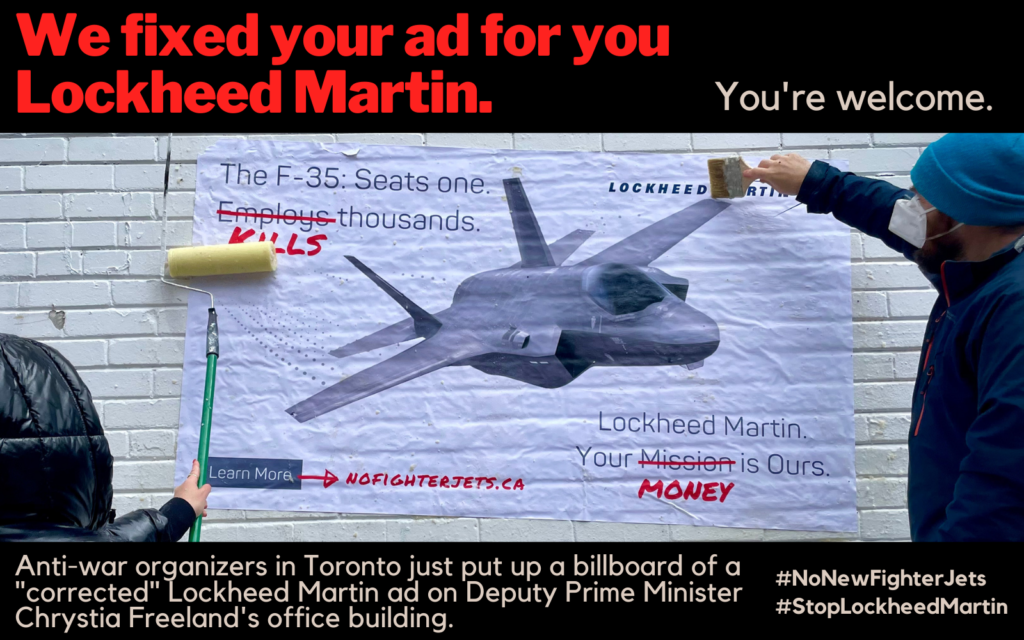 “The world’s biggest weapons company, Lockheed Martin has paid a fortune to get their ads and lobbyists in front of Canadian decisionmakers like Freeland,” said Rachel Small, organizer with World BEYOND War and the No Fighter Jets campaign. “We may not have their budget or resources but putting up billboards like this is one way to push back on Lockheed’s propaganda and Canada’s planned purchase of 88 F-35 fighter jets.”

Lockheed Martin is the world’s largest arms company with revenues of more than $67 billion in 2021. The billboard action in Toronto was part of the Global Mobilization to Stop Lockheed Martin, a week of action which has been endorsed by over 100 groups on 6 continents. The week of action began the same day as the company’s annual general meeting on 21st April.

On March 28 Public Services and Procurement Minister Filomena Tassi and Defence Minister Anita Anand announced that the Canadian government had selected Lockheed Martin Corp., the American manufacturer of the F-35 fighter jet, as its preferred bidder for the $19 billion contract for 88 new fighter jets.

“I am deeply disappointed with the selection of the F35 as the next fighter for the Air Force” said Paul Maillet, retired Air Force Colonel and CF-18 engineering lifecycle manager. “This aircraft has only one purpose and that is to kill or destroy infrastructure. It is, or will be, a nuclear weapon capable, air-to-air and air-to-ground attack aircraft optimized for war fighting.”

“The F35 requires a very complex and unaffordable military battle management infrastructure reaching into space to realize its capabilities, and we will be wholly dependent on US military infrastructure for this,” added Maillet. “We will be just another squadron or two of the US Air Force and as such dependent on its foreign
policy and military predispositions to conflict responses.”

“The F35 is not a defensive weapons system, but one designed to carry out aggressive bombing missions alongside US and NATO allies,” said Small. “For the Canadian government to move ahead with purchasing this fighter jet, and 88 of them no less, goes beyond Prime Minister Trudeau breaking an election promise. It indicates a fundamental rejection of the Canadian government’s commitment to act as a peacekeeping country promoting global stability and instead lays out a clear intention to carry out wars of aggression.”

“With a sticker price of $19 billion and a lifecycle cost of $77 billion, the government will certainly feel pressured to justify its purchase of these exorbitantly priced jets by in turn using them,” adds Small. “Just as building pipelines entrenches a future of fossil fuel extraction and climate crisis, the decision to purchase Lockheed Martin’s F35 fighter jets entrenches a foreign policy for Canada based on a commitment to wage war via warplanes for decades to come.”

Learn more about the No Fighter Jets Campaign and the Global Mobilization to #StopLockheedMartin.