Let’s Eliminate Nuclear Weapons, Before They Eliminate Us 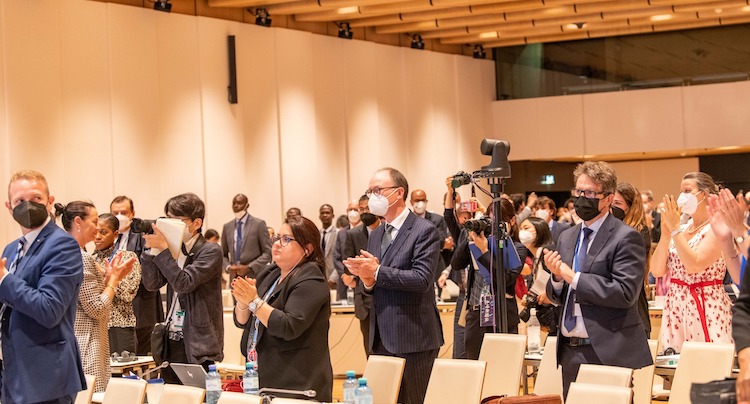 UNITED NATIONS (IDN) — When UN Secretary-General António Guterres congratulated States Parties to the Treaty on the Prohibition of Nuclear Weapons (TPNW) on the successful conclusion of their first meeting in Vienna, his warning was dead on target.

“Let’s eliminate these weapons before they eliminate us,” he said pointing out that nuclear weapons are a deadly reminder of countries’ inability to solve problems through dialogue and collaboration.

“These weapons offer false promises of security and deterrence—while guaranteeing only destruction, death, and endless brinksmanship,” he declared, in a video message to the conference, which concluded on June 23 in the Austrian capital.

Guterres welcomed the adoption of the Political Declaration and Action Plan, which will help set the course for the Treaty’s implementation—and are “important steps toward our shared goal of a world free of nuclear weapons”.

Alice Slater, who serves on the boards of World Beyond War and the Global Network Against Weapons and Nuclear Power in Space, told IDN : “On the heels of a precedent-shattering First Meeting (1MSP) of the States Parties to the new Treaty for the Prohibition of Nuclear Weapons in Vienna, the dark clouds of war and strife continue to plague the world.”

“We are enduring continued violence in Ukraine, new nuclear threats issued by Russia including a possibility of sharing nuclear weapons with Belarus, in the context of tens of billions of dollars in armaments being poured into Ukraine by the US, and a brutal and careless rush to expand the boundaries of NATO to include Finland and Sweden despite promises given to Gorbachev that NATO would not expand east of Germany, when the wall came down and the Warsaw Pact was dissolved.”

She said the news in the Western Media has been unrelentingly critical of Putin and has barely mentioned the new treaty to ban the bomb, despite the stunning Declaration issued in Vienna.

The States Parties, she pointed out, proposed thoughtful plans to move forward on establishing various bodies to deal with the many promises of the treaty including steps for monitoring and verifying the total elimination of nuclear weapons under a limited time frame, with full cognizance of the relationship between the TPNW and the Non-Proliferation Treaty.

“They provide for the development of unprecedented victims assistance for the dreadful suffering and radiation poisoning visited upon so many poor and indigenous communities during the long, horrible and devastating era of nuclear testing, weapons development, waste pollution and more”, said Slater who is also the UN Representative for the Nuclear Age Peace Foundation.

Dr M.V. Ramana, Professor and Simons Chair in Disarmament, Global and Human Security, Graduate Program Director, MPPGA, School of Public Policy and Global Affairs at the University of British Columbia, Vancouver, told IDN the meeting of the States parties to the TPNW offers one of the few positive ways forward from the dangerous nuclear situation that the world is confronting.

“Russia’s attack on Ukraine and its nuclear threats have served as reminders of the fact that as long as nuclear weapons exist, they can be used, albeit under rare circumstances.”

As famed truth teller/whistle blower Daniel Ellsberg has pointed out over the decades, nuclear weapons can be used in two senses: one of exploding them over an enemy target (as happened in Hiroshima and Nagasaki) and the other sense of threatening to explode them if the adversary did something that was not acceptable to the possessor of the nuclear arsenal, Dr Ramana said.

“This is akin to someone pointing a gun to force someone to do something that they would not want to do under normal circumstances. In the latter sense, nuclear weapons have been used repeatedly by states that possess these weapons of mass destruction,” he added.

It is, therefore, a welcome development that the States parties to the TPNW have promised not to rest until “the last warhead has been dismantled and destroyed and nuclear weapons have been totally eliminated from the Earth”.

That is a goal all countries should work towards, and work with urgency, declared Dr Ramana.

Beatrice Fihn, Executive Director of the International Campaign to Abolish Nuclear Weapons (ICAN), an anti-nuclear activist group which won the 2017 Nobel Peace Prize, said: “This meeting has really been a reflection of the ideals of the TPNW itself: decisive action to eliminate nuclear weapons based on their catastrophic humanitarian consequences and the unacceptable risks of their use.”

The States Parties, in partnership with survivors, impacted communities and civil society, have worked extremely hard over the past three days to agree on a wide range of specific, practical actions to take forward every aspect of the implementation of this crucial treaty, she pointed out, at the conclusion of the meeting.

“This is how we are building a powerful norm against nuclear weapons: not through lofty statements or empty promises, but through hands-on, focused action involving a truly global community of governments and civil society.”

According to ICAN, the Vienna meeting also took a number of decisions on practical aspects of moving forward with implementation of the Treaty which was adopted on June 23, 2022.

On the eve of the meeting, Cabo Verde, Grenada, and Timor-Leste deposited their instruments of ratification, which will bring the number of TPNW states parties to 65.

Eight states told the meeting they were in the process of ratifying the treaty: Brazil, Democratic Republic of the Congo, Dominican Republic, Ghana, Indonesia, Mozambique, Nepal and Niger.

The TPNW entered into force and became international law on January 22, 2021, 90 days after it reached the requisite 50 ratifications/accessions

Elaborating further on the outcome of the meeting, Slater said: “If we are to realize these new promises, we need a lot more truth telling. It is dishonest for our most respected media outlets to constantly harp on Putin’s “unprovoked” attack on Ukraine”.

She quoted the famed Noam Chomsky, American linguist, philosopher, scientist, and social critic, as saying: that it is de rigueur to refer to Putin’s criminal aggression in Ukraine as his “unprovoked invasion of Ukraine”.

A Google search for this phrase finds “About 2,430,000 results” Out of curiosity, [a]search for “unprovoked invasion of Iraq.” yields “About 11,700 results”—apparently from antiwar sources. [i]

“We are at a turning point in history. Here, in the United States, it has been revealed for all to see that we aren’t really an “exceptional” democracy,” she argued.

Besides the shocking events of an insurrection in our capital on January 6, 2020, and the incomprehensible reactions to those events, splitting our body politic into bloody parts, our history is catching up with us as we examine the continuing oppression of our black citizens, the renewed racial stereotyping and outrageous injuries to our Asian citizens as we rachet up Obama’s pivot to Asia, demonizing China as well as Russia, noted Slater.

“Add to that the continued mistreatment of our indigenous natives who survived the slaughter of the colonialist patriarchy, the denial of citizenship to women, a battle we thought we had won which has to be fought all over again now as the patriarchy rears its ugly head stripping us of the illusion of democracy we thought we had.”

The US government, she said, empowered by corrupt corporate marauders is protected by a judicial system, media, and government that offers no vision or path forward out of perpetual wars and towards cooperative and meaningful actions to avoid the cataclysm of nuclear war or catastrophic climate collapse, not to mention the spreading plague that we seem so inept at dealing with because of corporate greed and misplaced priorities.

“It seems America got rid of a king only to wind up with a tyrannical cabal of what Ray McGovern, a former CIA briefer for Presidents Bush and Clinton who quit in disgust and founded the Veterans Intelligence Professional for Sanity (VIPS) refers to as the MICIMATT: the Military, Industrial, Congressional, Intelligence, Media, Academia, Think Tank complex.”

This ongoing insanity, she pointed out, has led to our relentless expansion of NATO which met this month to address global challenges with Indo-Pacific partners Australia, Japan, New Zealand, and the Republic of Korea participating together in a NATO Summit for the first time, demonizing China, making commitments to continue the fight against terrorism, and to address threats and challenges from the Middle East, North Africa and Sahel.

There is a rising tide of grassroots actions. A peace wave went around the world to celebrate the need to end wars in June. Many people showed up to demonstrate against the NATO summit in Spain and locally around the world.

“The new treaty to ban the bomb, while not supported by the nuclear weapons states, has growing numbers of parliamentarians and city councils around the world urging its nuclear nations to join the treaty and make the promised efforts to abolish nuclear weapons.”

A good message to send to Russia which is thinking of putting nuclear weapons in Belarus. Giving peace a chance, declared Slater. [IDN-InDepthNews – 06 July 2022]

Photo: Applause after the adoption of the political declaration and action plan as 1MSPTPNW ended on June 23 in Vienna. Credit: United Nations Vie

IDN is the flagship agency of the Non-profit International Press Syndicate.

This article is published under the Creative Commons Attribution 4.0 International licence. You are free to share, remix, tweak and build upon it non-commercially. Please give due credit

This article was produced as a part of the joint media project between The Non-profit International Press Syndicate Group and Soka Gakkai International in Consultative Status with ECOSOC on 06 July 2022.