The majority of dictatorships on planet earth — by the U.S. government’s designation of which countries are dictatorships — are sold U.S. weapons. And most of their militaries are trained by the U.S. military.

If I had to pick a dictatorship to object to the U.S. government’s position on, it would be one of these many, and probably it would be Saudi Arabia. But, then, I’m not a Progressive Senator. If I were, then I would object to anything less than complete hostility toward a country that the U.S. has not armed or trained in war, but rather sits on the edge of going to war against — a country that the U.S. president not long ago threatened to drop nuclear bombs on. 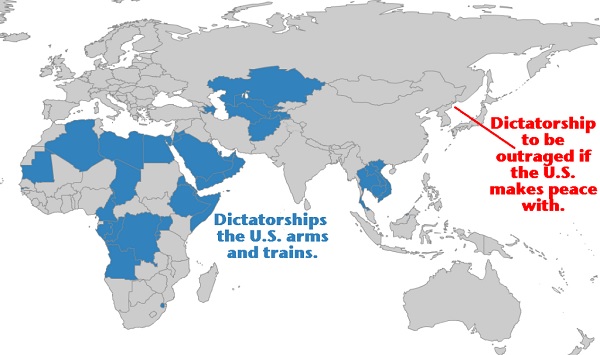 Imagine if the United States made peace with North Korea. There are perhaps three ways to do it.

1. The United States deals directly with North Korea and transforms it into another weapons customer, thereby facilitating U.S. weapons sales on both sides of the demilitarized zone. Nobody in Korea is likely to stand for this.

2. The United States allows Korea to reunify, but keeps all the weaponry and troops in Korea that it now has in the South (as required by current U.S. law) and adds some more weaponry and troops to the northern part of the unified country. This will require at least a few days of telling the U.S. public that the only defense against the evil Chinese or Russians is a well-armed unified Korea. That’s perfectly doable.

3. The United States allows Korea to reunify, disarm, and promote peace in the world. This would be something new under the sun. It’s what the people of Korea need and struggle for. The resulting firestorm in the U.S. media would be 10 times worse than Russiagate. Trump would be denounced in exactly the terms he ought to be denounced in for his actual offenses.

For possibility #3 to prevail, millions of people in the United States who are smart enough to oppose lots of horrible things Trump has done would have to strain their brains and find somewhere within them the capacity to make Trump aware that he will receive tons of praise if he does a good thing.

The most likely outcome and the best outcome are not the same. But the reason we’re considering any of them at all is because the two Korean governments are already trying to work around the disastrous U.S. presence — so who knows what’s possible?